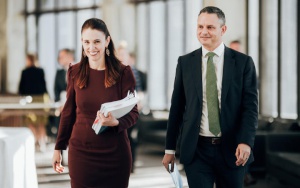 The notion that New Zealand is pluckily – or foolishly – punching above its weight in the march towards carbon neutrality by the year 2050 seems entirely deluded. Either way though, the idea seems too useful for the politicians to surrender it willingly. On the plucky side of the ledger, Climate Change Minister James Shaw last year described the anaemic Zero Carbon Bill as “a role modelling for other countries.” At the other extreme… After yesterday’s release of the final report of the Climate Change Commission, Act Party leader David Seymour was warning that it would be “foolish” for New Zealand to lead the world on cutting emissions. If only.

Both views seem somewhat detached from reality. After that Zero Carbon Bill was touted last year as a global model, New Zealand did indeed move up the global 2020 Climate Change Performance Index (CCPI) rankings that measure national compliance on a variety of climate change measures – but only from 44th to 37th place, with an overall grade of “low”. Currently, this country is in 28th place on the CCPI table, being well behind not only the Scandinavian countries but also Indonesia as well. Certainly, after replacing its inept predecessor in 2017 the Ardern government has got New Zealand moving in the right direction, but not at a pace that’s equal to the challenge.

True to form, the farming sector has used the CCC report as an opportunity to throw itself another self-pity party, and paint itself as being at risk of being “overwhelmed” ….because after a decades-long track record of environmentally destructive practices, farming is finally facing a bit of light-handed regulation. Back in the real world, farming seems to be doing just fine. This year has seen dairy farmers rewarded with “bumper” prices on global markets, such that they can confidently expect a record payout from Fonterra. Arguably, dairy farmers will never be better placed than now to reduce their dependence on habits that continue to poison New Zealand’s water supply with nitrites, and to pump methane into the atmosphere.

Unfortunately, the Climate Change Commission has treated the sector with kid gloves. It has not recommended cuts to dairy herds, a long overdue wake-up call. Greenpeace’s Amanda Larsson has provided a useful reality check on the fantasy that New Zealand is fronting the global climate change response:

“New Zealand has the world’s highest methane emissions per person, largely thanks to those six million dairy cows. The Commission’s goal of a 16% reduction in methane is not only insufficient, it’s unlikely to succeed because it relies on voluntary measures and future techno-fixes, like the fabled methane vaccine,” says Larsson.

So… Unless and until the boffins emerge from the lab with a magic techno-fix for methane emissions, the Commission has passed the parcel back to government and left it to make the hard calls on methane reduction, if such decisions are ever going to be made at all. Next year the government has to decide on whether agriculture gets included in the emissions trading scheme. (There, too, we’re not proceeding at breakneck speed.) By December, the government will issue its policy response to the Commission’s raft of recommendations.

Farming aside, the main recommendations on transport are less than concrete. The Commission recommends that nearly all cars imported by 2035 must be electric vehicles, and this will be the main lever by which the road transport fleet will ( hopefully) be de-carbonised by 2050. Currently, the affordability and the availability of electric vehicles(EVs) are problems for most of us. David Seymour’s annual salary would surely make him one of the relatively few New Zealanders able to afford the current circa $70,000 price tag for a new EV. Yet Seymour has chosen to claim that gosh, the cost would even be beyond an ordinary chap like him, too. Oh, really? Seymour is on an annual salary of circa $200,000, all up. More than ample, one would have thought, for the man from Epsom to put a down payment on a Tesla.

Globally, come 2035, one can safely predict that more EVs will be readily available, and at a cheaper price. (At which time BTW, petrolheads will still be able to buy used cars reliant on fossil fuels.) But again, it is not as if the Climate Change Commission is suggesting anything radical in promoting an EVs – by-2035- policy. A couple of days ago, the US Pew Research Centre said as much when publishing its latest figures on the EV take-up rates that are occurring elsewhere right now:

The fastest growth in EV sales has been in Europe: a compound annual growth rate of 60% from 2016 to 2020, compared with increases of 36% in China and 17% in the U.S…Last year, nearly three-quarters of all cars sold in Norway and more than half of those sold in Iceland were electric – by far the highest market shares for EVs in any of the 31 countries for which IEA has collected data. In 10 other European countries, between a tenth and a third of all new-car sales last year were electric.

Moving right along, and at the Commission’s own stately pace…by the end of next year, the Commission has suggested, the government should be able to announce some targets for getting more people cycling, walking, and using public transport. Targets are always nice. The Commission is also urging the phasing out of coal, and an expansion of electricity generation and use.

Interestingly, the Commission’s plan for forestry suggests that 300,000 hectares of new native forests and 380,000 hectares of new exotic forests can be established over the next 15 years. Lest there be concerns that this will put forestry in competition for land use with farming and horticulture…. the Commission optimistically believes such targets can be met by planting on steep and currently unproductive land. Good luck with doing that on the scale required.

An effective climate change policy can’t be painless. As the pandemic has shown, these kind of upheavals inevitably impose costs on society, and these costs fall much harder on some groups than on others. Some sectors (eg dairy farming) will be comparatively well placed to ride things out. Unfortunately, there will always be political opportunists willing to demand that any change envisaged must be pain free, and that any added costs should be treated as a sign of policy failure. That’s just what populists do.

As the pandemic also showed, only the state can address the costs that an effective climate change policy will bring in its wake. As fossil fuels get phased out and the price of carbon rises, and as less environmentally damaging alternatives are pursued – eg in the electricity sector – it is inevitable that transport and energy prices will rise. This burden will fall disproportionately on those on lower incomes.

The Commission report recognises this, and recommends “targeted” forms of relief. That’s unfortunate. Over the past three decades, the experience of measuring out targeted welfare assistance to the deserving poor has been shown to be socially damaging, difficult to access and costly to administer. Since the CCC report is a non-binding “blue skies’ exercise, it seems a shame that the opportunity for a bit more imagination about the response has been passed up.

Climate change is after all, a universal problem. The costs accumulated over decades – from the chasing of short tern profits from dairying– demand that universal solutions now need to be pursued. Ideally, this should be via a ‘polluter pays’ method of taxation, and/or by a universal entitlement ie. something akin to the Universal Basic Income (UBI) proposal but not necessarily replicating it in detail. ( Cost-cutting governments tend to like UBIs because the level at which the UBI is paid out can be so easily racheted downwards once the system is in place.)

One other thing : automation will have wreaked similar changes in the workplace by 2035. Therefore, the extra costs falling on the vulnerable from de-carbonisation need to be addressed in tandem with the income changes being wrought by technology. Otherwise, tinkering with forms of targeted help for those vulnerable to the costs of de-carbonisation is only likely to plump the pillows, amid a general increase in social inequality.

During the late 1970s, Linton Kwesi Johnson (born in Jamaica in 1952, came to Britain in 1963) released a series of angry speak/songs about his community’s experience of British injustice. Similarly, Anthony Joseph was born in Trinidad in1966 and came to the UK in 1989. Joseph has just released a single (“Calling England Home”) about the emotions involved when the country in which you’ve resided for so long still treats you as an alien, but is also the nearest thing now to a “home” that you have. Joseph doesn’t use the term, but Britain continues to treats many of its second and third generation Caribbean immigrants like an abusive parent.