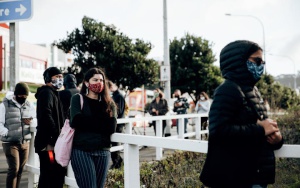 In a week when the Covid scare in Wellington and the national crisis in mental health both hit the headlines, they also seemed like mirror images of each other – in that we seem equally ill-prepared on both fronts. In both cases, contingency planning has seeds next to non-existent. Maybe Auckland’s greater experience with Covid might have enabled it to handle the fallout from the Sydney visitor more competently than the capital city has managed. Initially at least, Wellington’s defences have been quickly over-run.

Testing sites and telephone information resources have been swamped. People who had just been told they were close contacts were being urged to socially isolate and get themselves tested ASAP. Unfortunately, they were then being turned away in droves from the few testing sites open in Wellington, and given a phone number instead to book a time for a test – only to find that either they couldn’t get through, or that they were being hung up on, as demand flooded the help-lines available.

It looked like no-one had ever done a test run in Wellington as to what might happen to testing sites and to communication channels, during a community outbreak. Our strength seems to be in cobbling together a recovery plan, but only after a crisis has made landfall. Sure, we can be pretty good at rushing to the scene of a disaster, and making do. Yet effective contingency planning? Not so much. Moreover, the discussion as to whether Wellington should now be prioritised for vaccine rollouts in order to minimise the fallout from a potential community outbreak has barely begun.

That piecemeal approach may eventually be an adequate way of slowing down a Covid community outbreak, oif and when it happens. This time, Wellington may be lucky. We shall see by the weekend/early next week if that is the case. But this same kind of re-active response can be fatal – literally- during a mental health crisis, or when it comes to suicide prevention. The recurring complaint in mental health is that the human resources are insufficient to prevent the escalation of risk, until well past the danger point.

Time and again, the anecdotal evidence is that people at risk have to be actually engaged in the process of harming themselves or others, before help can be made available. The shortages – in mental health response teams, safe areas and beds etc – are such that families that know their loved ones are in danger are being told to wait until the worst happens, in order to qualify for assistance. Over a period of decades, the capacity of the mental health system has been degraded to such an extent that help only de allocated to the virtual aftermath of a traumatic episode, and then only to the worst conceivable cases.

There weren’t a lot of politicians putting up their hands this week to admit their role in how this crisis has come to pass. In fact, National leader Judith Collins feigned outrage when asked on RNZ whether the underfunding by the previous National government may have contributed to the current crisis. The media shouldn’t ‘play point scoring” by asking her such questions, she claimed. As for the Ardern government, its accountability was being measured this week in fairly abstract ways – mainly, by calculating how little it has spent so far of the funds it had previously budgeted (with much fanfare) for mental health. Unfortunately though, mental health isn’t like Kiwibuild. It isn’t like keeping a scoreboard of homes built versus homes promised. It is (literally) about saving lives.

No wonder then, that there seemed to be a total disjunct between the government’s blueprint and the recent march on Parliament led by mental health advocate Mike King. King and his supporters want to see evidence that the system has got extra resources in hand, to help families prevent the worst from happening to loved ones struggling with mental health problems and suicidal inclinations.

No doubt, devising and enacting a systemic change in how we should deliver mental health services is a desirable long term goal. Yet that’s not a good reason for deferring putting extra resources into the hands of the mental health workers currently trying to cope with the demands being made of them. For example: while the $1.9 billion for mental health services has hogged the headlines, only $10 million a year over the next four years has been allocated to suicide prevention. Only $20 million has been allocated to existing mental health and addiction services. No wonder that King – and everyone else – is saying that nothing observable seems to have changed in mental health delivery. The policy wonks are still working away at the whiteboard.

To be fair, the health bureaucrats do have a lot on their plates right now. At the same time as reforming the delivery of mental health services, they also have to oversee the scrapping of the DHB system and the re-centralisation of health service delivery in general, a process that includes setting up a separate Maori Health Authority. Plus, they’re trying to manage a vaccine rollout to the entire population of New Zealand, while also trying to prevent community outbreaks of Covid-19. There’s a lot happening in pubic health.

Lest the changes to mental health delivery get lost in the shuffle, it is worth revisiting just what the original $1.9 billion budget allocation is meant to deliver. What’s been envisaged is a virtual army of mental health workers trained and placed within GP practices, among iwi providers and at other key delivery points, nationwide.

That means that when a GP identifies a mental health or addiction issue they can “physically walk with their patient to a trained mental health worker to talk”, the budget documents say. That person would have an ongoing relationship with the person in distress, to guide and support their recovery. No details are given about the number of trained workers needed to support this, but the Budget documents say new workforces will be built to support people, and $212m is included for health workforce training and development.
The service aims to reach 325,000 people with mild to moderate mental health and addiction needs by 2023/2024. The government says the measures will “transform our approach so that within five years every New Zealander who needs it has access to a range of free services that support and maintain their mental wellbeing.”

That’s a very worthy vision. It sounds like the pro-active, preventative approach that we need, and would be in stark contrast to the re-active, cut price delivery system for mental health that New Zealand has been operating with for the past three decades. But at the current glacial rate of progress, the individuals and families with those “mild to moderate” mental health and addiction needs seem likely to be waiting until 2024 before much in the way of qualitative change is noticeable. Currently, there’s a bottleneck. One in which system design is taking priority over real and present needs. Well, many desperate individuals and families can’t afford to wait around for a better tomorrow. Lives are at stake.

Footnote One: The government’s claim that a targeted vaccine rollout in Wellington cannot be launched because “the same work force” staffing the current response would be required for it, seems to be simply untrue. Pharmacists and retired GPs who have been recruited for the vaccination rollout have not been engaged in this week’s Wellington response.

Footnote Two: In what is presumably, another reflection of the lack of contingency planning, the testing sites don’t seem to have user-friendly opening hours. A 9am to 6pm (at best) opening period is out of sync, in that many workers will be employed during those hours. Is it really impossible to have a testing site open at night? Moreover…while bookings are required for most test sites, the Healthpoint info page says that the telephone booking centre opens only at 9am and closes at 4.30pm each day. That too, seems incredible. With a community outbreak in the offing, can’t we run a booking service for Covid testing that’s available at night, at least until 10pm ?