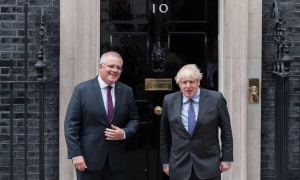 So much for those assurances that New Zealand would be the first cab off the rank for any post -Brexit trade deal with the United Kingdom. Assuming for the moment that this was ever a good idea, the Aussies have managed to get there first. Yesterday, Scott Morrison and Boris Johnson agreed in principle to what CNN is describing as a “tiny” trade deal between Australia and the UK. More than anything, it shows the desperation that Johnson is feeling to sign a deal, any deal that indicates Britain is still open for business, regardless of the disastrous decision to leave the European Union.

Reportedly, the legal details have yet to be thrashed out. On paper, the deal gives Australia an opportunity to diversify away from its dependence on trade with China. The deal will boost its trade with Britain by an estimated $1.3 billion a year when the deal comes into effect in mid 2022. This is still only a miniscule gain, given that two way trade between Australia and China topped out at $251 billion in the year 2019/20. ( The UK is only Australia’s 8th most valuable trading partner.) Similarly the deal is barely a rounding error for the Brits as well. It is forecast to boost U.K. GDP by a modest 0.02 percent over 15 years.

Oh, there are a few side benefits. The two countries will recognise each other’s professional qualifications, and holiday visa access will be extended. The main concerns about the deal have been on two related fronts : agriculture, and the environment. Even though tariff-free access to Britain for Aussie beef, dairy, sheepmeats and sugar will be phased in over a long 15 year period, British farmers and NGOs have been concerned about the likely impact on British agriculture. They’re also worried about the precedent set by showing that Britain is willing to scrap its environmental standards in order to secure a trade advantage, even one as meagre as this one is.

They have a point. On the Climate Change Performance Index rankings, the UK rates 5th in terms of the range of measures it takes to protect the environment. Australia ranks a lowly 54th. (New Zealand is 28th.) As the UK branch of the World Wildlife Fund pointed out in an op ed in the Independent last week – and also here – this deal will erode British standards. It will also reward Australia unduly for its poor track record. Currently, Australia has the highest rate of deforestation in the OECD, and most of those trees are being cut down to clear ground for livestock. In that respect, the deal sets a terrible precedent for Britain’s future trade deal with the Mercosur bloc of South American nations, which are committing environmental crimes in the Amazon basin. As the WWF/UK says :

This could mean opening the UK market to agricultural imports that have contributed to widespread deforestation in the Amazon, undermining the significant work of UK and international partners to secure supply chains that are free of deforestation and conversion. Currently, there are no UK laws to enforce good environmental standards when it comes to what [Britain is] allowed to import.

Precedents aside, Australia is a seriously bad environmental player in its own right. Here’s WWF-UK again:

Australian farming allows the use of 71 highly hazardous substances and thousands more types of pesticides that are currently banned in the UK, including neonicotinoids, which harm the pollinators at the root of our food system, such as bees. The environmental standards of some foods produced in Australia are so far below the standards upheld by UK farmers that these products shouldn’t be sold in the UK at all, let alone given open access to UK markets with a zero tariff, zero quota trade deal. This isn’t simply about free trade versus protectionism. It is about delivering the best results and most sustainable approach for people and the planet….

What yesterday’s trade deal signifies is not only Britain’s desperation post Brexit, but how unregulated trade is disastrous for the planet. No doubt, New Zealand will now be jostling to secure its own “free” trade deal with Britain. By the time we do, our beef, dairy and sheepmeat exports will be competing in British supermarkets not only with local British produce, but with cheap and nasty Australian exports of the same products, and these will have got a jump on us in the queue.

No doubt, we can compete with the Australians on quality. However, the Aussie/UK deal marks a setback for our exporters, and for the planet.

Footnote: No doubt, a new, post-Brexit trade deal with the European Union is more important to us than a deal with Britain. Two-way trade (pre-Covid) between New Zealand and the UK was worth about $6 billion in 2019. By comparison: as of September 2020 , two way trade between NZ and the EU was worth $17.55 billion. Yet reportedly, the EU/NZ trade talks are going badly. At this point, New Zealand is not willing to accept the offer the Europeans have put on the table. Yesterday, Trade Minister Damien O’Connor set off for Europe to try and shore up our bargaining efforts.

Ever wondered what happened to Sarah Palin? The 2008 Republican vice-presidential candidate preceded Donald Trump as the champion of angry white Americans left behind by the market economy. In that respect, Palin was a John the Baptist precursor of Trump-as-Messiah. Since then, her star has diminished more than somewhat. To the point where yes, that’s Palin playing the singing, dancing bear on a recent episode of the Masked Singer TV show …That’s her out front, second from left. 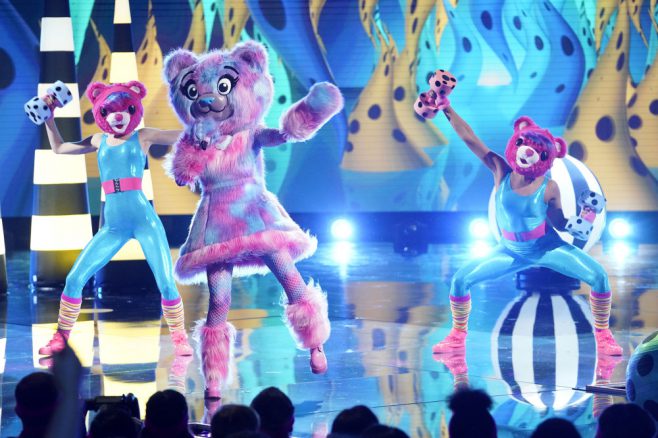 Lets hope that Palin’s career trajectory signals how Trump’s star power will fade. Right now, GOP politicians are terrified of what Trump’s fanatical base will do to anyone who breaks ranks. Yet if Trump critic Lynne Cheney survives in Wyoming in the midterm elections next year, and as the likes of Florida governor Ron DeSantis emerge as more credible presidential candidates for 2024, Trump’s grip will loosen. Democrats can take comfort from knowing that Trump can be relied on to lash out resentfully at whoever supplants him.

In recent months, the British/Nigerian rapper Little Simz has been trying to transcend the genre conventions, with mixed results. Her fire is undiminished, but it sat oddly with the sumptuous arrangement on the recent single “Introvert.” In the past, she has been at her formidable best on bare-bones tracks like “ Venom” and “ Backseat.” On the new cut “ Rollin’ Stone” the first half of the song is her in free flow mode – and there’s no-one better at it – while the latter half of the track contains the experimentation. Two halves of Simz, and this time, it is a near-perfect whole.

For old times sake, here’s a brilliant early track from when she first began to realise her life was changing, but that she had no reason to whine about it.. I love the lines about her seeing from the stage the “hella pure souls in the front row” …looking at her like she had once looked at J. Cole.