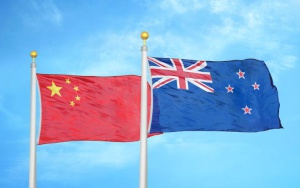 In order to obtain support from the two major parties, Act Party deputy leader Brooke Van Velden twice had to soften the language of her parliamentary motion yesterday condemning China’s persecution of the Uighurs. The key word “genocide” was deleted. Evidently, the kind of resolution passed by a conservative government in the UK proved to be far too tough for a centre-left Labour government and a centre-right National opposition to countenance. Yesterday, the two major parties were united in their fear of retribution from China.

The extent of our China cringe can be measured by comparing the two resolutions. Here’s the UK version:

That this House believes that Uyghurs and other ethnic and religious minorities in the Xinjiang Uyghur Autonomous Region are suffering crimes against humanity and genocide; and calls on the Government to act to fulfil its obligations under the Convention on the Prevention and Punishment of Genocide and all relevant instruments of international law to bring it to an end.

And here’s the weakened version that our Parliament passed yesterday:

This House is gravely concerned about the severe human rights abuses taking place against Uyghurs and other ethnic and religious minorities in the Xinjiang Uyghur Autonomous Region. We call on the Government to work with the United Nations, international partners, and to work with all relevant instruments of international law to bring these abuses to an end.

The key word missing there is “genocide.” The weasel words used by Foreign Minister Nanaia Mahuta to justify its deletion from the original motion put forward by the Act Party could hardly have been more cynical:

Frankly, that is mealy-mouthed horseshit. So we’re not going to call it genocide – even though our main Western countries have already done so – until “international courts” declare it to be so? Yet Mahuta knows full well that the UN’s human rights commissioner Michelle Bachelet has been stalled for the past two years from entering Xinjiang to make any such unfettered assessment.

Bachelet said [in February 2021] that talks to organise a visit had begun but no agreement has yet been reached. “A serious negotiation is at the present moment taking place between the office of the (UN human rights) commissioner and the Chinese authorities,” [UN secretary general Antonio] Guterres told Canada’s CBC television network on Sunday.

In addition, New Zealand – via Foreign Minister Mahuta- has been the only member country to express “ discomfort” with the 5 Eyes network being used to get around the China blockade, in order to improve our knowledge of what China has been doing to the Uighurs. The double standard is kind of breath-taking. Within New Zealand, Mahuta has been eloquent in condemning the colonial suppression of indigenous culture. But she seems deeply reluctant to condemn the wholesale destruction of Uighur culture and the suppression of the Uighur language. Hey, since it is imperative to defend te reo at home, why isn’t it imperative to defend its equivalent abroad?

New Zealand cannot credibly claim that it lacks sufficient information to classify the Chinese persecution of the Uighurs as genocide. Under the 1948 United Nations genocide convention, ratified by New Zealand, “genocide” is defined as committing any of a number of acts with intent to destroy whole or part of a national, ethnic, racial or religious group. There is a mountain of evidence that this is exactly what has been happening for several years now in Xinjiang. Routinely, New Zealand preaches on the world stage about the need to uphold international laws and UN conventions. In this case, we are putting money – keeping in China’s good books with regard to trade access – ahead of those norms and principles.

Mahuta’s suggestion that the Rwanda genocide somehow belongs in a different category to what is happening in Xinjiang is also infuriating. New Zealand was at the forefront of the few countries trying to alert the global community to the genocide that was unfolding in Rwanda during the early 1990s.We pressed for UN intervention when hardly anyone else saw it as being a necessity. In 1993/94, New Zealand was on the Security Council. Our UN representative Colin Keating played a key role in prodding the major Security Council powers into taking action on Rwanda. Here’s how Keating himself described the situation he faced in early 1994:

“What we found out in hindsight, but nobody knew at the time of the genocide in the security council apart from a few of the permanent members, was that in January 1994 the head of the UN peacekeeping mission in Rwanda, General Dallaire, a Canadian general, had warned the UN headquarters that mass atrocities were being planned, he had intelligence and he asked for authority to act against it.” That authority was not given and the intelligence was not passed on to the Security Council.

Regardless, Keating reached his own conclusions, based on his reading of the information available. The ostensible trigger for what was a pre-planned genocide was the shooting down on April 6th 1994 of a plane carrying the Rwandan president. But Keating was already on the case:

“Easter that year was right at the beginning of April, and the UN was closed on Good Friday, which was the 1st of April. I took home with me, from the office, a bunch of papers that I had been meaning to read for a long time. I sat in my apartment and read these reports about Rwanda and I thought to myself, oh my god, there have been already in Rwanda several instances of what we would call genocide. How is it that I didn’t know about that, how is it that no-one in the West knew about that and how is it not being alerted to us by the professional staff in the Secretariat ?”

The outcome of that inertia at the UN was catastrophic, as Keating explained:

Yes, blood on their hands. Still, the same failures are being repeated today, for different reasons. (No-one’s trade interests were at stake in Rwanda.) Mindful of those failures of the past though, other Western countries are now being far more pro-active, and are calling “genocide” on the basis of the reliable intel that exists about the Xinjiang situation. This includes the evidence of large forced labour camps, mass sterilisations, and the deliberate destruction of Uighur culture.

To repeat: for all our posturing on the world stage about human rights, the rule of law and our allegedly “independent” foreign policy…Jacinda Ardern is being outdone by Boris Johnson (!) on the moral urgency of the Uighur situation. Clearly, our foreign policy “independence” extends only to us taking the minimal steps least likely to annoy the Chinese Communist Party – which can be relied on to denounce yesterday’s feeble effort anyway, if only to ensure that we stay cowed.

Footnote: Yesterday, Twitter provided a useful example of a politician not being cowed by China. The Philippines are also a close trading partner of China, but that didn’t stop them taking China to the International Court of Justice (ICJ) in the Hague over China’s bogus claims to some rocky outcrops in the South China Sea that both countries claim as their own. In 2016, the ICJ found resoundingly in favour of the Philippines. At the time, China brushed the ICJ verdict aside as only “a piece of paper.”

In late April, China used its maritime militia to re-assert its claims to the disputed Scarborough Shoals. That aggression inspired this compelling tweet yesterday from Filipino senator Teddy Locsin Jnr:

China, my friend, how politely can I put it? Let me see…GET THE FUCK OUT. What are you doing to our friendship? You. Not us. We’re trying. You.

That is what is called speaking truth to power. We should try it sometime.

Footnote Two: It is not all about words. Other Western countries are not merely condemning China for committing genocide, they are imposing (a) trade sanctions (b) asset freezes and (c) travel bans on the top Chinese officials responsible for the policies being enacted in Xinjiang.

Talking of politicians going morally AWOL… This may be a niche category, but “Joshua Gone Barbados” would have to be one of the most vividly detailed songs ever written about a labour dispute. In it, songwriter Eric von Schmidt eloquently condemned the Caribbean trade unionist and politician Ebenezer Joshua (1908-1991)for (a) inciting a strike at a sugar factory on the impoverished island of St Vincent, and then (b) leaving the cane cutters and factory hands to their fate once the owners brought in a bunch of scabs and thugs.

Ever since Tom Rush turned the song into something of a minor cult item in the late 1960s – Bob Dylan did a version on the Basement Tapes – Joshua’s defenders have always claimed their man was criticised unfairly. Not so much, really. IMO, this fascinating brief history of the sugar factory central to the dispute suggests that the song had it about right, even though Joshua did redeem himself somewhat during a long period afterwards as the country’s Prime Minister. Over the past month, St Vincent has been hit by a large volcanic eruption, and then by floods and landslides. Here’s a link to a list of charities where you can donate to the relief work being attempted. On Tom Rush’s definitive version, the song’s bitter melancholy is underlined by the recognisably liquid playing of Bruce Langhorne, the session guitarist and percussionist who, allegedly, was the human inspiration for “Mr Tambourine Man.”

Since there’s not much call these days for a Tom Rush-a-thon, why not? Here’s his best known composition, which became a hit for the Walker Brothers:

And from the same album, which introduced Joni Mitchell’s “Circle Game” to the world, here’s the lovely instrumental “ Rockport Sunday”:

Fun fact: I remember Jackson Browne once saying that he’d opened on tour for Tom Rush, and that Rush had been the only musician he’d ever met whose lifestyle was so crap, he was suffering from scurvy. (The rock’n’roll life had nothing on the folk music circuit.) Rush got Covid last year, and he turned 80 in February.