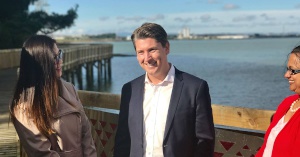 Are Fair Pay Agreements (FPAs) truly the work of the devil? Given the vehement response to them last week by (a) employer groups and (b) by their parliamentary friends on the extreme right, you could be forgiven for thinking these FPA things will mean curtains for commerce as we’ve known it for the past 30 years. Believe me, they won’t. Less excitable types will regard FPAs as heralding only a mild shift towards a more centralised form of bargaining over wages and conditions, much akin to what other successful economies (eg Germany) have recognised for decades.
From the mid-1980s onwards, the Australian economy has done quite OK under a more centralised system of workplace bargaining. In fact, our proposed FPAs are based on Australia’s modernised awards system. So…not exactly a case of socialism red in tooth and claw.

That distinction is important. As the name implies, FPAs are about enhancing the potential for fair bargaining. They are not about increasing union membership. (Given how much union power has been diminished, FPAs may have little or no impact on union membership.) The fact is…successful economies overseas have found a greater level of centralised bargaining is more efficient, delivers fairer outcomes, boosts productivity and improves worker buy-in to the company goals. Only in New Zealand do we think that an atomised workplace is a good thing, because it gives employers the “flexibility” to compel employees to accept “choices” they can’t refuse.

So what are FPAs?
They are a legally binding mechanism for delivering an industry-wide set of minimum standards. They aim to create a floor for the terms and conditions of employment by stipulating – for example – such things as hours of work, minimum wages, overtime rates and all the other ingredients of a fair pay for a fair day’s work. Firms and their workers will still be entirely free to negotiate outcomes above the minimum. To achieve the goals being sought, FPAs have needed to include requirements on the negotiating parties to initiate bargaining, to bargain in good faith, to facilitate union access to the workplace, so that workers and negotiators can be kept well informed. Importantly, they must also contain a mechanism for bringing bargaining to a close.

How do FPAs come into being?

A union in the sector can start one if they have the agreement of either 10 per cent of a workforce or 1000 employees. They can also meet a “public interest test” that is yet to be set. If they meet one of these tests, bargaining between the union (or unions) and the employers begin. The government will actually fund both sides $50,000, and employers must allow employees two two-hour paid meetings during the bargaining…If the two sides agree on something, then the FPA goes out for ratification, with both employees and employers voting. Employers get as many votes as they have employees that would be covered, with slightly more if they have less than 20 employees.
So employers will have ample protections, and especially those who operate small businesses. Essentially, this FPA proposal was the majority view put forward in 2019 by a working group chaired – ironically enough – by ex-PM Jim Bolger, whose government had brought in the Employment Contracts Act in the early 1990s that decimated the union movement.

The price of the ensuing “ flexibility” has been damaging for New Zealand. We work longer hours than the workers in almost every other OECD country, while producing less per hour. Arguably, this has been partly because a private sector fixated for the past three decades on cutting labour costs has not invested and innovated to the same extent as our trading competitors. With new technology already posing serious challenges to the modern workplace, FPAs offer a tool for managing the socio–economic challenges now on the horizon, to ensure that slashing costs and eliminating jobs isn’t – once again – New Zealand’s prime response to change. In our communities we are still counting the social costs of going down that road.

The road ahead
The government will now draft the necessary legislation, which will be introduced to Parliament later in the year. It is expected to be passed into law sometime in 2022. To date, the main sticking point with FPAs has been the requirement to bargain once the pre-conditions have been met. Employer groups are resisting that aspect of the reforms. But as Iain Lees-Galloway, the predecessor to the current Workplace Minister Michael Wood said when the Bolger working group first reported back, the compulsion involved offers a degree of protection for good employers – in that it penalises only the bad employers who would undercut the standards for everyone else, given half the chance :

“The challenge if [FPAs]are not made compulsory is ‘how do you avoid penalising good employers who pay their staff well, who are prepared to adhere to the terms and conditions of a fair pay agreement when they’re competing against someone down the road who’s not meeting those conditions?”

Exactly. To CTU president Richard Wagstaff, the FPAs promise a re-balancing of power within the workplace, a benefit felt especially for those workers who are most vulnerable.
As Wagstaff says:

In the past year we have all clearly seen the essential work that people working in our supermarkets, our cleaners, and security guards do. But they continue to be paid the minimum wage or close to it. Wages have been driven down simply to improve profit margins. We have seen this recently with the Wellington bus drivers and their dispute to settle their collective employment agreement.

“The introduction of Fair Pay Agreements signals the biggest change to workplace laws in several decades. This is what working people in union have been campaigning for; a more balanced employment relationship between working people and employers – putting people back at the centre of employment.”

Looking ahead
As Wood has already indicated, contractors will also eventually need to be covered by an FPA or something akin to it. Currently, the employment /unemployment statistics are being skewed by the large numbers of people self-designated as “contractors” who remain open to exploitation over their wages and conditions of work. Worldwide, the unscrupulous practices of major “new technology” firms– from Uber to Amazon to the film industry – that derive from their ability to treat the people who work for them as contractors rather than employees, are being successfully challenged.

To date, the firms who operate in the so called “gig economy” have been characterised by long working hours, poor hourly pay rates, and the absence of penal rates, sick pay and holiday pay entitlements. FPAs could finally offer such “contractors” a mean of organising and a genuine avenue for improving their lot. Yet that will be further down the track.

Footnote One: Given the hysteria on the right, it is worth underlining that having a mechanism for collective bargaining will not displace all other forms of workplace bargaining. In Germany, collective bargaining at industry level between individual trade unions and employers’ organisations is definitely the central arena for setting pay and conditions. Yet, as this article points out, while separate agreements between trade unions and specific companies are less common, they do exist. For example, one can point to the workplace agreement covering the motor company Volkswagen. Interestingly though, such company-specific agreements are more commonly found in the poorer parts of the country, such as in the former East Germany :

Figures from the government-backed Institute of Employment Research (IAB) show that, in 2018, almost half (46%) of employees in Germany were covered by industry-level collective agreements, with another 8% covered by agreements signed at company level – meaning overall collective bargaining coverage was 54%.
Right. So that still left 46% of German employees whose terms and conditions were not being set by collective bargaining. They key point being though…over half of the employees not covered by collectives, were still benchmarking their own negotiations on the industry-level agreements. The same would surely happen here.

As mentioned, in the wealthier parts of Germany, it is more likely to find the industry-wide collective agreements. “It is… noticeable that the proportion of employees covered by collective bargaining is 11 percentage points higher in West than in East Germany.” Meaning : collective bargaining does not deliver inflexible work arrangements, and it does not reduce a country’s wealth. Quite the opposite, it would seem.

Footnote Two: Looking a lot further down the track, if the FPA process did eventually result in higher wages, this would deliver an obvious benefit to those parts of the private sector dependent on essential (and discretionary) spending – and in addition, this would help the RBNZ to meet its inflation targets.
Working For The Man
Obvious choice, I know. Here’s Roy Orbison, at the peak of his powers, intent on climbing the social ladder the old way – by marrying the boss’s daughter, and becoming The Man.