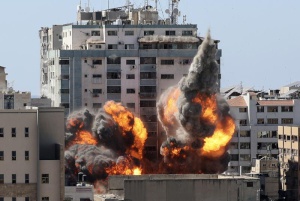 At last count, 195 Palestinians have reportedly died in the latest round of violence, 55 of them children. Roughly ten times that number have been wounded, and thousands made homeless. On the Israeli side, 8 people have died from rockets fired from Gaza. The imbalance in casualties reflects the vast gap in weaponry between the two sides. The Israelis are carrying out air strikes with impunity on densely populated civilian neighbourhoods. While the media reports cite the 3,000 rockets fired in return from Gaza, it has been less widely reported that, since 2012, the Jerusalem Post has been claiming that about 90 % of the primitive rockets fired from Gaza have been intercepted by Israel’s “Iron Dome” defence system. In fact, one reason why the Gazans fire so many rockets is to try to overwhelm Iron Dome, and enable a few rockets to get through. (Iron Dome has been described as a very expensive system built to intercept very cheap rockets.)

The death toll is, of course, only one measure of the suffering being inflicted. Yet the deadly ratio is pretty consistent. In Israel’s Operation Cast Lead military invasion of Gaza in late 2008/early 2009, an estimated 1,440 Palestinians died (with some organizations estimating that at least half of the dead – roughly 720 – were civilians), compared with 13 dead on the Israeli side, with only four of them being civilians.

Yesterday’s destruction of the AP/Al Jazeera building in Gaza has had a familiar ring to it as well.

In 2014, Palestinian rights group Al Haq said “indiscriminate attacks on media buildings have been a significant feature” of Israel’s military offensive in the Palestinian territory that year, which the United Nations said killed more than 1,500 Palestinian civilians, including more than 500 children.

Then as now, the Israeli military had been given the co-ordinates of the buildings housing the foreign media organisations, in order to protect them. Yesterday’s pinpoint demolition can only be taken as a deliberate attempt to silence the media and prevent it from informing the outside world about what is being done to the people of Gaza.

Before mentioning the events leading up to the latest outbreak, it is worth mentioning when this kind of violence did NOT occur. As the New York Times has pointed out this week, there was no such sustained reaction from Palestinians when US President Donald Trump recognised Jerusalem as the capital of Israel. Nor was there sustained protest after neighbouring countries (Bahrain, the UAE) signed up to the Abrahamic Accords that normalised closer ties with Israel, even though that meant selling out the Palestinian cause in the process. Nor was there sustained protest when Israel shirked its responsibility (as an occupying power) to vaccinate Palestinians against Covid-19.

As the NYT also noted, it had been seven years since Israel’s last major battles with Hamas, and 16 years since the last Palestinian intifada. So what was so different this time?

Reason One: Netanyahu needed it. Benjamin Netanyahu had a personal motive for instigating a war. He had just failed to meet his deadline for forming a governing coalition and in early May, Israeli president Reuven Rivlin had invited Opposition leader Yair Lapid to form a government by June 4. To do so, Lapid would need some of Israel’s extremist political parties. Netanyahu has now given those parties the war they’d been itching for. If Lapid fails, then new elections – Israel’s fifth election in two years – will be called. Netanyahu would be hoping to be seen as the military strongman who had just crushed the “terrorists” in Gaza. This gambit could still backfire on him. What he has done has brought intense insecurity to the streets of Israeli cities, and has instigated violence between Jewish Israelis and Israeli Arabs. Voters may not reward him for giving them this war.

Reason Two: The al-Aqsa mosque. Nearly a month before fighting broke out in earnest, the Israeli police had conducted a ham-fisted sortie into the venerated al-Aqsa mosque. On the first day of Ramadan in mid-April, they went in and cut the wires for the microphones to the minarets at the mosque, lest the call to prayer should distract from a speech by President Rivlin to mark Memorial Day, when Jews commemorate Israeli soldiers who died fighting for the country. Hard on the heels of the loudspeaker action, Palestinians were also forbidden to gather at a plaza outside the Damascus Gate, a popular hangout place for Palestinians in the evenings during the month of Ramadan. Protests broke out.

It was the outgrowth of years of blockades and restrictions in Gaza, decades of occupation in the West Bank, and decades more of discrimination against Arabs within the state of Israel, said Avraham Burg, a former speaker of the Israeli Parliament and former chairman of the World Zionist Organization. “All the enriched uranium was already in place,” he said. “But you needed a trigger. And the trigger was the Aqsa Mosque.”

As the protests escalated, Jewish extremists – including members of the Lehava far right organisation reportedly being wooed by Netanyahu – marched through East Jerusalem chanting “Death to Arabs !” before beating up onlookers that they thought were Arabs. In one videoed incident, they dragged a motorist from his car, beat him unconscious and left him lying on the road.

Reason Three: The East Jerusalem evictions. Also during April, and as the result of a court action instigated by Jewish settlers, six Palestinian families in the Sheikh Jarrah suburb of East Jerusalem were evicted from homes they had occupied for decades. Protests ensued. As the Reuters report says, these disputes have long histories:

The Palestinians have lived in Sheikh Jarrah since they were re-housed there in the 1950s by Jordan after fleeing or being forced to abandon their homes in West Jerusalem and Haifa during the fighting around Israel’s creation in 1948. The settlers who filed the lawsuit over Othman Ibn Affan street said they bought the land from two Jewish associations that purchased it at the end of the 19th century. A lower Israeli court found in favour of the settlers under an Israeli law that allows Jews to reclaim ownership of property lost in 1948. No such law entitles Palestinians to do the same in West Jerusalem or other parts of Israel.

And what about Biden?. Famously, Barack Obama and then vice-president Joe Biden disliked Netanyahu and found him untrustworthy. This year, there was a pointed delay before President Biden placed his first call to the Israeli PM. In March, a four page internal White House memo on a “Palestinian reset” was obtained by the US media.

positions that favoured Israeli settlement expansion in the West Bank and did not prioritise the two-state solution, an internal memo reveals…

The Biden administration memo recommends voicing US principles on achieving Israeli-Palestinian peace under a two-state solution framework “based on the 1967 lines with mutually agreed land swaps and agreements on security and refugees”.

Dream on. Negotiations have never been carried out in good faith, with the intention of reaching a just settlement. At best they have been the world’s favoured way of managing the oppression, not of ending it. In the meantime, bombs paid for by the US taxpayer continue to rain down on Gaza. This week, Foreign Policy magazine did a useful job of describing the dismal prospects for a just outcome to the Israel/Palestine conflict:

The war with Gaza will presumably end, as it has in the past, with both sides having inflicted so much suffering on the other—though with Israel having inflicted vastly more—that both can declare victory and call it a day. But that may not change the conflict inside Israel, which for the first time pits Jewish against Arab citizens. Coupled with the rising tensions in East Jerusalem, the very personal violence in Israeli cities could radicalize both sides and deepen polarization. The current wave of violence, after all, began with right-wing Jews mobs marching through East Jerusalem shouting, “Death to the Arabs!”

Theoretically, every US administration has some leverage over Israel, provided the White House is willing to take the political risks involved in using it. What about Joe Biden? Not so much, as the Foreign Policy columnist says:

The word around the White House is, “We’re not going for a Nobel Peace Prize here.”

Any attempt to do so would place the Biden administration on a collision course not only with Israel but with the U.S. Congress, where Netanyahu enjoys wider support than he does in Israel.

Any significant change would require a wide-ranging and intensive diplomatic effort by the Americans, and Biden is showing no sign of being willing to spend much of his political capital on this issue:

Whatever Biden decides to do, he will have to work through the Abrahamic countries as well as Egypt and Jordan and perhaps Qatar, each of which has various degrees of leverage both with Israel and with the Palestinians. Among his goals should be ending the crushing blockade in Gaza, freeing up travel within the West Bank, ending eviction and demolition, strengthening Palestinian self-governance, addressing the grievances of Israeli Arabs, and cracking down on violence by right-wing groups, some of whom belong to Netanyahu’s own governing coalition.

This morning, Hamas reportedly offered a ceasefire. Israel refused it. The military onslaught will continue, Netanyahu says, until the will of Hamas has been broken. Or more likely, until enough of Netanyahu’s personal political needs have been satisfied.

Footnote: Not that it seems to make any difference, but Israel’s actions in (a) using excessive and disproportionate force by bombing densely populated civilian centres and (b) targeting the media could both count as war crimes under international law. So could the indiscriminate firing by Hamas of rockets at Israeli cities, although as mentioned, the overall outcomes are far different.

In 2013, the then 23 year old Palestinian pop singer Mohammad Assaf won the final of the Arab Idol TV show. It was a fairy-tale journey from a Gaza refugee camp to international stardom. His Wikipedia page contains the details:

Mohammad Assaf travelled from Gaza Strip to Egypt to audition for Arab Idol. It took him two days to reach Egypt by car due to complications on the border. At the beginning, he had to convince [ie.bribe] the Egyptian security at the border crossing, where he was stuck for two days, to leave Gaza. Once he reached the hotel where the auditions were taking place, the doors were closed [and] they did not accept any more auditions, so he jumped over the wall. After he jumped over the wall, he couldn’t get a number to audition; he sat hopelessly in the hall where other contestants were waiting for their turn. He started singing to the contestants and a Palestinian contestant, Ramadan Abu Nahel who was waiting to audition heard him and gave him his number saying, “I know I won’t reach the finals but you will”

In the years since, Assaf has become a star throughout the Arab world, while remaining a symbol of hope for his compatriots in Gaza and on the West Bank, and throughout the Palestinian diaspora. Currently, he lives in Dubai with his wife, Reem. Assaf often combines traditional music with lyrics and images that contain topical social commentary. For example :