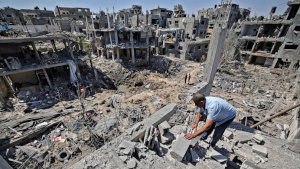 Mere days after the Israeli/Hamas ceasefire, some things have immediately returned to normal. Israeli police have reportedly been in action again against Palestinians gathered at the Damascus Gate andin al-Aqsa mosque, even though the police brutality at those sites was one of the triggers of the recent 11 day burst of fighting that killed nearly 250 Palestinians, including 66 children, and wounded about 2,000 others. Twelve people in Israel died in rocket attacks. Humanitarian aid is now resuming, and the effort to rebuild Gaza has begun again. The same destruction, rebuild and destroy again cycle that we saw in 2014, and after Israel’s wanton Operation Cast Lead invasion of late 2008/early 2009. is occuring once more. The same scenes of destruction after the bombing and sheeling of civilian centres in Gaza are circulating in the global media.

At the height of the recent round of fighting, our own government weakly called on both sides to exercise restraint. It forthrightly named Hamas rocket attacks as “ unacceptable” and said “ they must stop” – but did not single out Israeli air attacks on civilian neighbourhoods as being similarly beyond the pale. It merely urged the Israelis to be “restrained” and “avoid civilian casualties” in its responses to provocations. The Green Party’s Golriz Ghahraman expressed her ”disappointment” with the government’s response. Other minority parties in other Parliaments have done more.

Ireland for instance, has already pledged 1.5 million euros to help rebuild Gaza. One of Ireland’s minority parties has also sought to directly sanction Israel. As the Jerusalem Post reported yesterday, a motion to expel Israel’s ambassador from Ireland is expected to come to a vote in Ireland’s parliament this week.

The motion states that “over 60 children have been murdered by the [IDF,]” and that “the current escalation of violence was instigated by the attempt to ethnically cleanse 28 Palestinian families from the Sheikh Jarrah area of Jerusalem.”The motion also accuses Israel of war crimes, ethnic cleansing and illegal settlement expansion, and says “the Israeli ambassador’s presence in Ireland is untenable in these circumstances.” The motion would not be binding, but would put pressure on the government.

Reportedly, co-sponsorship is not common in the Dáil, the lower house of parliament. Therefore, too much should not be read into the small number of movers. As the Jerusalem Post conceded: “While only 11 of 160 lawmakers signed onto the motion [this] does not reflect the amount of support for it overall.” And furthermore :

Sinn Féin, another opposition party, which has 37 seats, plans to support the motion as well. The party’s youth wing posted an online resolution calling to expel Israel’s ambassador that had nearly 84,000 signatures as of Sunday.

Ultimately, the motion may be put forward as a conscience vote:

In addition, the source said, the coalition is considering allowing legislators to vote according to their conscience, in which case much of parties Fianna Fáil and the Greens, which are very pro-Palestinian, would likely vote in favour.

Aa the Post concludes, “Legislation that would put heavy fines on the sale of products from the West Bank, Golan Heights or east Jerusalem has repeatedly been advanced in the Dáil and Seanad, or senate, but never became law on the grounds that it would contravene EU trade laws.” Either way that this Irish vote on the Gaza atrocities goes, the effort puts New Zealand’s tepid response to shame.

In the US, the latest Biden administration response on Gaza situation feels like something out of a John Oliver black comedy routine. Amid the usual meaningless US advocacy of a “two state solution” that daily becomes more impossible, and the resumption of conscience salving aid to the Palestinians, the US is also providing Israel with a fresh military arms package that includes a new “smart bomb :”

The Biden administration’s $753 million smart bomb package for Israel includes a little-known weapon—one quarter the size of Israel’s current main smart bomb—that Pentagon sources think could calm critics of Israel’s bombing…The State Department notification, sent to Congress on May 5, is classified, but Newsweek has learned that in justifying the new sale of this Small Diameter Bomb (SDB), the administration stated that the “size and accuracy of the SDB I allows for an effective munition with less collateral damage.”

Great sales pitch. Who knew that it was the size of Israel’s bombs that contributed to the carnage in Gaza? Hmm. This could be a gamechanger, but only if Israel’s air strikes on apartment buildings in Gaza suddenly develop an interest in minimising civilian casualties. (We haven’t seen sign of that so far.) Unlike Israel, which has an Iron Dome defence system that intercepts some 90% of the primitive rockets fired from Gaza, the Palestinians are defenceless against the air bombardment and shelling of their homes. It seems the height of cynicism for the Biden administration to sell Israel more weapons to replenish its arsenal – and then toss a new smart bomb into the package to ease the conscience of the American public.

Clearly, the HRPP party that still heads the caretaker government in Samoa did lose the last election, fair and square. It then tried to rig the result by creating a new MP. After that gambit failed, the head of state obligingly refused to re-convene Parliament. When that trick failed, the HRPP locked the doors of Parliament. For now, the stalemate continues. Despite what the Samoan people said at the ballot box and despite what the Supreme Court has deemed to be lawful, the caretaker government has triggered a crisis of such magnitude that it is gambling on fresh elections being called, in which it might have better luck. Even if new elections are called, it seems that the HRPP will stay in power until it gets the election result it wants. Above all else, what the caretaker government is really taking care of is its own self-interest.

To justify his power grab, Tuilaepa Sailele Malielegaoi and his cronies have been draping themselves with the cloak of tradition, and have sought the blessings of the church. It looks more like they are degrading tradition, and trying to turn the church into a partisan tool of the HRPP. They seem unwilling to surrender power to anyone – and certainly not to the woman (Fiame Naomi Mata’afa) who leads the FAST party that won the most seats at the last election. The real “tradition” on display is the tradition of dictatorships clinging to power because of their messianic belief that they are the only reliable guardians of the nation’s destiny. Well, that’s not how a modern democracy works.

The international community needs to remind the care-taker government of its obligation to respect the will of the people, and the rule of law. But one can see why PM Jacinda Ardern would not want to intervene in ways that would make the Samoa’s legitimate rulers – the FAST party – look like the tool of foreign, neo-colonial powers. That would only strengthen the HRPP’s bogus claim to be an upholder of tradition. Even so, Samoan democracy needs to be defended, and somehow without playing into the hands of the people determined to subvert it.

The longer this crisis continues, the more likely it is that fresh elections will be called, and the more likely it is that Tuilaepa’s ‘bloodless coup’ will be successful. But by going down this road, Tuilaepa has poisoned the democratic process in Samoa, and created bitter divisions in his country that seem likely to last for a generation. As with the coups in Fiji, New Zealand appears impotent to affect the outcome.