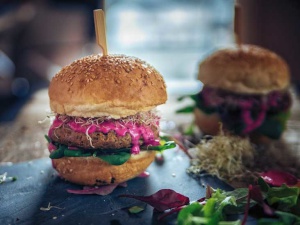 Talk about living in a bubble. As vegetarianism and veganism become normalised – there are more options on restaurant menus! – it can be easy to think that the whole world is gradually giving up on meat. Alas, the reverse is true. Americans for instance consumed 100 kilograms of meat and poultry in 2018, up from 75 kilograms in 1960, according to the US Department of Agriculture figures. Over the same 60-year period, global meat production has nearly quintupled, from 71 million tons to 340 million tons. Meat consumption per capita in China has reportedly doubled since 1990. In China as elsewhere, factors like urbanisation, population growth and the expanding middle class have combined to drive a steep rise in meat consumption. In many parts of the world, the conspicuous consumption of meat, poultry and seafood is treated as a sign of social success.

That’s good news for our meat exporters who are looking at a $2.71 trillion global meat market by the year 2040. But it is terrible news for the planet, and for the animals with whom we share it. In a New York Times op ed a fortnight ago, Ezra Klein spelled out several good reasons why industrial-scale animal agriculture poses a threat to survival that’s comparable to our dependence on fossil fuels. In case you missed the article (the NYT is pay-walled) his arguments bear repetition, starting with a few salient points about pandemics. Unfortunately, the bugs do tend to jump from animals to humans, and under conditions that intensive agriculture fosters.

As best we can tell, the novel coronavirus jumped from bats, to some other animal, to humans, with the locus of infection being a Chinese meat market. There’s nothing unusual about that. Swine flus — yes, plural — jump from pigs to humans. Avian flus jump from birds to humans. Ebola most likely came from monkeys. “Preventing the Next Pandemic,” a report by the United Nations Environment Program, estimates that 75 percent of the new infectious diseases that threaten humans come from animals.

The more meat we eat, Klein points out, the more need for intensive agricultural technologies to meet the rising level of demand. This intensification is brutalising for the animals, and puts humans at risk:

The animals are bred to gain weight fast, crowded together in sprawling industrial operations and pumped full of antibiotics to prevent disease. These operations are petri dishes for viral mutation. The animals, whose immune systems are suppressed by stress and fear, fall ill easily, and every creature is a fresh opportunity for a virus to develop into a form humans can catch and then spread.

That’s not the only health risk posed by intensive agriculture :

About 65 percent of antibiotics in the United States are sold for use on farms. These antibiotics are often, if not mostly, used to keep animals from getting sick, not to treat them once they’re ill. They’re then excreted in animal waste, where they make their way into waterways, into fish and into us. Antibiotic-resistant diseases are already killing 700,000 people a year worldwide. The U.N.’s interagency group on antimicrobial resistance estimates that could rise to 10 million per year by 2050. To put that toll in perspective, there are around three million confirmed deaths from Covid-19 so far.

Right. And then, Klein continues, there are the climate change considerations. The consolations that we cling to – hey, New Zealand’s intensive agricultural production is necessary to feed the hungry planet ! – don’t really stack up. For one thing, modern farming happens to be a hopelessly inefficient form of land use, and thus an unsustainable way of feeding humanity :

Only 18 percent of the global calorie supply, and only 37 percent of the global protein supply, comes from meat and dairy. But about half of all habitable land on the planet is given over to agriculture, and more than 75 percent of that goes to animal agriculture. This raises our disease risk. We keep encroaching deeper into the wilderness, bringing both our domesticated animals and ourselves into contact with new pathogens. But it’s also a huge driver of global warming: We’re cutting forests that were sequestering carbon and turning them over to cows, which emit tons of methane, a particularly potent greenhouse gas.

New Zealand contributes more than its fair share of this potent driver of climate change. Farming creates methane and nitrous oxide gases, which account for nearly half this country’s greenhouse gas emissions. Overall :

About a quarter of global greenhouse gas emissions are traceable to the food supply chain. Animal agriculture accounts for about three-quarters of those emissions and nearly 90 percent of those in the average American diet. A 2020 study found that even if all fossil fuel emissions ceased today, the food system would still push warming more than 1.5 degrees Celsius above pre-industrial levels, which most scientists consider unsafe.

At this point, Klein tentatively raises the issue of how we choose to treat the animals that we eat. Personally, he doesn’t regard the eating of meat as being necessarily immoral. How it gets onto the plate though, is another story :

What I believe is immoral is the way we treat animals in most factory farms. And the scale of that suffering melts the mind. A reasonable estimate is that about 70 billion land animals are raised and slaughtered for food each year, a vast majority of them chickens….We treat too many animals like inputs, and their suffering as a mere by-product. Cheap meat isn’t really cheap. It’s just the animal that paid the cost, living in conditions so gruesome I fear describing them. But suffice it to say: If we could produce the meat we want without the suffering we now inflict, it would be one of the great achievements of our age.

In time, it is likely that New Zealand – and its farmers – will look back in shame at our participation in these cruel practices. Increasingly, such industrial-scale barbarism cannot be justified as being regrettable, but necessary. And that, Klein concludes, is where some reason for optimism exists. It has to do with the emerging technology for (and marketing of) plant-based and/or lab grown “meatless meat” to replace the harms done by our current inefficient and immoral methods for producing animal protein for human consumption. While the market for such products is already gathering steam, Klein believes the urgency of the problem cannot be left to the free market, which is known to be woefully inefficient and cumbersome when it comes to meeting social needs. (There are patents to be protected, potential rivals to be blocked, and shareholder demands to be met.) Only governments, Klein argues, can provide the scale of investment and the readiness to innovate that are required :

So far, most of these advances [in plant -based or lab grown alternatives] and most of these investments, are through private dollars, with the findings locked up in patents, by companies competing with one another for market share. We’re going to need to move faster than that. “If we leave this endeavour to the tender mercies of the market there will be vanishingly few products to choose from and it’ll take a very long time,” Bruce Friedrich, co-founder and executive director of the Good Food Institute, told me.

This path may seem to be a forlorn hope in New Zealand. The strength of our agriculture lobby has made politicians gunshy about taking any meaningful regulatory action to reduce the impact our farming sector is having on climate change, water and soil degradation and animal suffering. Yet just as our wool exports have been disrupted by synthetics, our meat industry is facing a similar kind of challenge. Farming as we’ve known it, needs to adapt or it will decline. To head off competition, the private meat industry giants in the US ( eg Tyson Foods) are already investing in the companies producing the plant-based and lab-grown alternatives. These could soon be taking a significant portion – analysts have been tipping at least 10% – of the current market for animal-based protein.

In future, Klein suggests, the alternative ‘meatless meat” products could initially be used to reduce the harms being done by current practices. They could for instance, replace much of “the cheap commodity meat” that goes into “so many burgers and chicken nuggets and fish sticks, as animal-based meat becomes a much smaller part of our diet. But we [could]raise those animals more humanely, and run less risk to the planet and ourselves.”

Footnote: Obviously, Ezra Klein isn’t the only person arguing that governments need to recognise and act upon the planetary and national need to minimise our dependence on animal-based protein. This site makes the same useful connections between food production, climate change and the preservation of wildlife diversity :

• Food accounts for over a quarter (26%) of global greenhouse gas emissions1;
• Half of the world’s habitable (ice- and desert-free) land is used for agriculture;
• 70% of global freshwater withdrawals are used for agriculture2;
• 78% of global ocean and freshwater eutrophication (the pollution of waterways with nutrient-rich pollutants) is caused by agriculture3;
• 94% of mammal biomass (excluding humans) is livestock. This means livestock outweigh wild mammals by a factor of 15-to-1.4 Of the 28,000 species evaluated to be threatened with extinction on the IUCN Red List, agriculture and aquaculture is listed as a threat for 24,000 of them.5

In other words…. “Food production lies at the heart of trying to tackle climate change, reducing water stress, pollution, restoring lands back to forests or grasslands, and protecting the world’s wildlife.”

Footnote Two: Recently, New Zealand has only just begun to consider how the land available for food production is being squeezed by (a) the encroachment of housing onto hitherto productive land and (b) the diversion of land from farming into forestry. As indicated above, there more fundamental issues involved in how we should be addressing the trade-offs between housing, food production and land use.

Footnote Three : Even allowing for the increase in global population since 1960, one of the most compelling illustrations of the rise in global meat consumption has been this graphic, which shows the tonnages involved over the past 60 years, as based upon the UN’s Food and Agriculture Organisation figures. 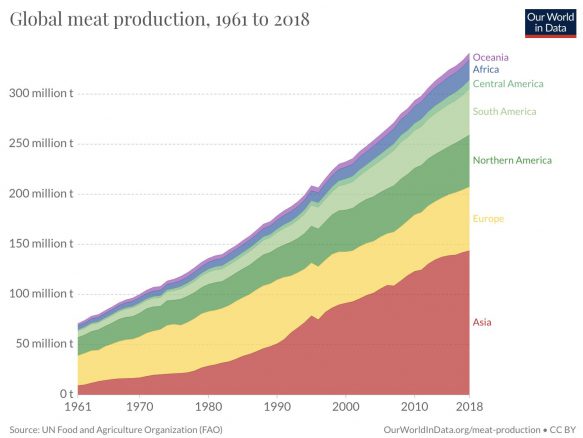 At the very least, the graphic suggests that global action cannot succeed by denying the world’s taste for meat.= If it is to be successful, the alternatives will have to provide the same “taste” approximation as meat, although at less cost to animals, to humans and to the environment. At the supermarket, vegetarians may just have to accept the wider need for meatless meat that tastes like meat, even if that’s the last thing on their minds.

For well over a decade, the New Orleans-based singer/songwriter Carsie Blanton has been releasing her in-offensively tuneful and politically liberal pop music. While she’s easy for hard-bitten wannabes to patronise, the skill with which she constructs this music is admirable. Here’s her new single. Arguably, her deadpan fatalism about how everything is coming apart feels more credibly of-the-moment than you know, doing shouty rage against the dying of the light.

Talking of quasi-medicated floatiness off the edge of the world, this shoegazey track by Mia Joy is almost the definition of the word “ethereal.” It sounds a bit like early Mazzy Star, but without the underlying angst. And the video has banana telephones. Very cute.