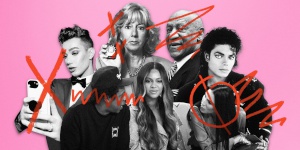 If there really is anyone out there who feels genuinely panicked about what ‘cancel culture ‘ is doing to our precious freedoms, then maybe they should just take a deep breath, look hard at who has allegedly been ‘ cancelled’ and see if they can detect any trace of a lasting “cancellation“ effect. Chances are, the alleged cancellees will be doing just fine. By and large, they will be people who do not lack for a public platform – never have, never will – and the downstream effects of being “ cancelled” will almost invariably be trending towards zero.

Meaning: the last time I looked, Kanye West and J. K. Rowling were still billionaires. (Reportedly Rowling’s sales increased last year in the UK despite/because of her transphobic manifesto.) Woody Allen is still planning to shoot his next film in Paris this year. Lauren Southern’s Youtube channel still has 656,000 subscribers. These folks seem to be doing more than OK for people who have (allegedly) been the victims of a digital lynch mob. The rare exceptions – the ones who have experienced career-ending repercussions – have been the likes of Harvey Weinstein, the late Jeffrey Epstein, Matt Lauer, Bill Cosby, Johnny Depp, and Kevin Spacey. These are people whose actions now make it impossible for them to credibly claim victimary status. Not that they haven’t tried for it.

So… How come there is such a readiness to assign superpowers of career cancellation to ordinary people who (on the evidence) lack the ability to cancel anything much beyond their Netflix subscription? It would suggest that cancel culture has been vastly oversold. The fake furore over it has looked more like an attempt by the dominant cultural, economic and political elites to exempt themselves from criticism, by claiming persecution by the mob. Not so much a right to speak freely, as a demand to be heard in respectful silence.

When this stuff is seen in the round, there’s a pattern to it. As Vox News says, the pattern usually unfolds rather like this:

A celebrity or other public figure does or says something offensive. A public backlash, often fuelled by politically progressive social media, ensues. Then come the calls to cancel the person — that is, to effectively end their career or revoke their cultural cachet – whether through boycotts of their work or disciplinary action from an employer. To many people, this process of publicly calling for accountability, and boycotting if nothing else seems to work, has become an important tool of social justice — a way of combatting, through collective action, some of the huge power imbalances that often exist between public figures with far-reaching platforms and audiences, and the people and communities their words and actions may harm.

Right. But then comes the attempted turning of the tables:

…Conservative politicians and pundits have increasingly embraced the argument that cancel culture, rather than being a way of speaking truth to power, has spun out of control and become a senseless form of social media mob rule….an unstoppable force descending to ruin the careers of anyone who dares to push society’s moral boundaries. This framing frequently portrays the offender as the victim of reckless vigilante justice.

Sympathy for the devil, indeed. Time and again the offensive onslaughts of the culturally empowered get portrayed as a project that’s worthy of admiration, because it allegedly entails the fearless challenging of social norms. It is usually no such thing. The “challenge” tends to play out in an insulated forum in which the likes of Lauren Southern amuse their peers by goading the peasants at the gates. As mentioned, the voices angling for victim status at the hands of cancel culture (usually they’re the voices of angry white men) rarely skip a career beat, despite the heat that’s being generated.

Historically, there’s nothing new about cancel culture. In many ways, it is just an amplified version of the whining about“ political correctness” aka “p. c. gone mad.” Back then too, the p.c. crowd were allegedly storming the ramparts, oppressively policing language use and querying the god-given right to publicly express one’s resentments of gays, blacks Asians and trans people, without being made to feel bad about it. Jeez, can’t you people take a joke? Again, what’s being demanded is not simply the right to speak, but the demand to be exempt from blowback.

Despite all the faux outrage about cancel culture, New Zealand hasn’t (yet) had much of a public debate about what should be defined as “hate speech” within what the government is proposing to introduce into law. At some point, the process will dovetail with the forms of harmful speech targeted by the Christchurch Call. In fact, it was the Christchurch mosque attacks – and the shooter’s online manifesto – that motivated the government to act.

Free speech has never been an absolute right here, or anywhere else. Not even in the US, despite the constitutional protections contained in the First Amendment :

Categories of speech that are given lesser or no protection by the First Amendment (and therefore may be restricted) include obscenity, fraud, child pornography, speech integral to illegal conduct, speech that incites imminent lawless action, speech that violates intellectual property law, true threats, and commercial speech such as advertising. Defamation that causes harm to reputation is a tort and also an exception to free speech.

Currently in New Zealand, the legal boundaries for what qualifies as hate speech are those set out in section 61 and in section 131 of the Human Rights Act. These provisions include procedures for lodging complaints and a mediation process. At the end of the road, a tribunal can require the offender to desist and even in exceptional cases to pay monetary damages. In practice though, these provisions have been more aspirational than real, largely because they have been notoriously difficult to enforce. What the government is proposing to do is to shift the process into the Crimes Act, to widen the scope of protection, to clarify the language involved and to increase the potential penalties. In the current climate, all of this is bound to be controversial, whatever shape the legislation finally takes.

Eddie Clark, a public law lecturer at Victoria University has usefully described what the government is trying to do:

The resulting proposals pull in two different directions: on one hand tightening definitions of what qualifies as hate speech, on the other significantly broadening the categories to which it can apply.

Among other things, Clark points out, the proposals expand the protections in some directions, and narrow them in others :

The language would also be revised to make it an offence to intentionally “stir up, maintain, or normalise hatred” against a nominated group through “threatening, abusive, or insulting communications, including inciting violence”. This is narrower than the existing [Human Rights] law, meaning speech intended to bring a group into “contempt or ridicule” would no longer be covered.

In its Cabinet paper, Clark says, the government is also proposing to expand the recommendations made by the Royal Commission into the mosque shootings:

Where the Cabinet paper goes significantly further than the royal commission is in its recommendation the new law be extended beyond race and religion to cover all categories protected under section 21 of the Human Rights Act. These include age, sex, disability, religion, race, sexual orientation, political opinion and a number of others.

The Cabinet paper also proposes to add a prohibition on the incitement of discrimination, and it pointedly defines the grounds for discrimination so as to include gender identity and sex characteristics. Clearly, the government is aware of the conflicts between the so called TERFs (trans-exclusionary radical feminists) and the transgender community, and is seeking to limit the potential for transphobic actions and commentary. However, as Clark usefully points out:

Despite some claims to the contrary, the proposed laws would not cover (for example) the unkindness and rudeness implicit in casually mis-gendering a trans person.

What Clark does find to be of more concern is the proposal to carry the Human Rights Act protections against discrimination based on “political opinion” over into the arena of hate speech legislation. As he says, “Political opinion is an area in which robust, even hostile, debate is important, and there is potential for a chilling effect.” As yet, the government has not yet released a formal draft of the legislation that it has in mind.

Footnote One : What should be clear from the above is that here – and in the US, UK and elsewhere – hate speech legislation is not about protecting people from having hurt feelings. It is about protecting people and communities from harm. For better or worse, the test for proving that harm is substantial. As Clark says. “ The threshold for criminal liability is very high, requiring a high degree of animosity and an effect far beyond offending an individual.”

Footnote Two: Whatever the wording of the legislation, its application will have to be on a case by case basis, if at all. The context matters, and so do the power imbalances. These will differ in the details of each case. A decade ago for instance, I opposed the de-platforming of the reggae musician Beenie Man from a local music festival. (In the past, some of Beenie Man’s music had included anti-gay lyrics.) IMO, it seemed like virtue signalling to de-platform a minor artist singing in a patois unintelligible to 95% of the crowd, while celebrating artists with a far bigger audience (Eminem, Guns & Roses) who had expressed much the same anti-gay sentiments all too clearly. When Beenie Man said it, this was an outrage. When Eminem said the same kind of stuff, it was outrageous.

Footnote Three. Political correctness, callout culture and cancel culture, as Vox astutely points out, all owe their origins to the US civil rights movement, which initiated the concrete strategy of boycotts that later became a feature of the anti-apartheid movement. The same techniques are being used today in the Boycott Israel movement. Interestingly, some of the loudest critics of cancel culture also happen to be prominent critics of the customer boycotts of products made in Israel. They’re consistent, at least.

Here’s the Who, with a cautionary tale from the Monterey Pop Festival. When you aren’t allowed to say “ fuck off “ in a song, you might well resort to the destruction of property.