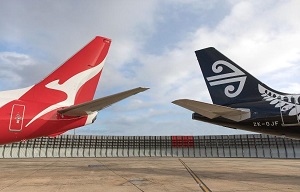 A
midst the coverage of the hugs and kisses and reunion tears one hates to be a killjoy… But there has been little attention paid to the pattern of travel we’re likely to see with the Trans-tasman bubble. Clearly, there has been a lot of pent-up demand for the Visiting Friends and Relatives (VFR) kind of travel which – while welcome on humanitarian grounds – will be of less benefit to our ailing tourism industry than say, holiday excursions and high-end business travel. Sure, the people coming here mainly to visit the grandkids and stay with the family will spend a bit in cafes and on accommodation, but not so much in scenic destinations, and on bungee jumping and white-water rafting. According to Air New Zealand, three quarters of the initial bubble influx fell into the “visiting friends and family” category.

That’s nice, but the prime aim of creating the bubble was to restore the practices (and spending patterns) of traditional tourism. If and when the VFR travel dissipates and something more like normal tourism resumes, that won’t necessarily be mission accomplished, either. A conflict will then arise between our desire to foster domestic tourism, and the lure for Kiwis of spending their money offshore on trips to the Gold Coast or the Blue Mountains. Similarly, the Morrison government has been handing out travel vouchers to lure Australians to home destinations like Cairns, but Queenstown will now loom as an attractive alternative. As yet, no one quite knows just how the net benefits of the investment in domestic tourism vs the travel bubble will pan out.

For better and worse, the travel bubble means that whatever they do will have potential repercussions here, and vice versa. But can they be trusted? The stereotypes endure. As Privacy Commissioner John Edwards tweeted yesterday, maybe it is time we finally buried the underarm bowling incident – if only because, he added wryly, there are more recent and more compelling reasons for holding a grudge. Edwards cited the Tampa, their refugee detention policy, their deportation of Kiwis and their coal exports. I’d also add Mel Gibson and Tony Abbott in his Speedos to that list.

As things stand, New Zealanders are fairly ambivalent about the travel bubble, not that you wouldn’t know it from the general tenor of the coverage. As the Guardian reported yesterday:

[The travel bubble] has been greeted with trepidation by the wider New Zealand public, with polling finding only around half of New Zealanders, or 49%, were in favour of opening the trans-Tasman bubble. The poll by Research New Zealand for RNZ surveyed a sample of 1,000 New Zealanders, and found 22% of respondents were still on the fence about the bubble, and 28% were against an opening.

These misgivings may dissolve in time, if all goes well. Yet the ongoing problem with Transtasman joint action is that their response to the pandemic is still wedded to the problematic AstraZeneca vaccine, while we have hitched our wagon to the Pfizer vaccine, which is fast becoming the global gold standard. This difference has implications. Yesterday the Aussie politicians gave us further reason to think twice about what opening up to our Transtasman neighbour and its internal problems may involve.

Right now, Australian PM Scott Morrison is going through a rough period politically, because of (a) the delays in the vaccine rollout and (b) the question marks hovering worldwide over the AstraZeneca vaccine in which Australia has invested so heavily. Yesterday Morrison brought state leaders together to try and get the vaccination programme back on the rails. The main drivers for this effort being Morrison’s poll ratings, then tourism recovery, and then public safety – roughly, in that order.

So….in order to get the vaccine rollout numbers looking better, Victoria’s state government has agreed to create three new mass vaccination hubs to administer the AstraZeneca vaccine to people aged over 50, and to those under 50 willing to risk it. At those three new hubs in Melbourne and Geelong, only the AstraZeneca vaccine will be available. The hubs will co-exist with GP clinics, which have been the cornerstone of the Aussie vaccine rollout.

Hmm.. Yet as almost everyone has heard, the Astra Zeneca vaccine has been associated with a rare, serious (and sometimes fatal) blood clotting side effect. In Europe and elsewhere, those rare blood clots have been found disproportionately among women under 50, and especially among even younger women. So why is Victoria barrelling on regardless? The usual story: yes, there is a serious risk but the chances are you’ll dodge the bullet and in any case, catching Covid-19 is even riskier. As professor Ben Cowie, the health bureaucrat in charge of Victoria’s vaccine rollout has conceded :“Whilst there are very rare, serious side effects of the AstraZeneca vaccine, particularly for people aged under 50 years, essentially we’re balancing this against the risk of a pandemic.”

Right. Yet only a week ago, Victoria’s acting premier James Merlino had put the rollout of the AstraZeneca vaccine on hold. At the time, Merlino said that the pause would (a) allow for new training for staff to deal with public concerns and(b) allow for legal liability worries to be resolved, after reports that some doctors were reluctant to offer the AstraZeneca vaccine to under 50s “because of legal concerns.” Translation: they were worried about being sued.

Since then, has the AstraZeneca vaccine been found to be safer ? No. All that has changed is that the staff administering the shots have been “trained” in how to talk anxious members of the public down off the ledge, and the doctors have been re-assured that they probably can’t be sued if anything goes wrong. But will, as promised, the option of taking the Pfizer vaccine instead be open to people under 50, and especially to the younger women known to be most at risk? That’s still only a maybe. As mentioned, the Pfizer option won’t be available at the mass vaccination hubs. In the meantime, it seems to be full speed ahead with treating the people of Victoria as the canaries in this coal mine.

Among everything else that’s wrong with this picture, the official rationale that the AstraZeneca vaccine is safe for people over 50 and is only problematic for those aged younger seems pretty shaky. After all, the Australian woman who died a few days ago from the blood clotting side effect after having her AstraZeneca vaccine shot was aged 48, which surely, is still within the margin of error for anyone in their 50s. Reportedly, two similar cases are still in hospital.

It is also fascinating that the worries of Aussie GPs about their legal liability for administering vaccines (that are known to carry a rare but real risk) have apparently been met. How? You might well ask. It seems that the GPs legal defence would run something like this: given that the risks associated with the AstraZeneca vaccines have been widely publicised, anyone turning up at those vaccination hubs or GP clinics will know that they’re running a risk, and so if anything goes badly wrong, their families won’t be able to sue the doctors, or the state or federal government, or the health bureaucrats. Caveat emptor, basically. Have an AstraZeneca vaccine shot, Victoria seems to be saying, but its your funeral, lady. Literally.

Yikes. At a time when many people are still gunshy about vaccines in general, the level of cynical decision-making that’s evident across the Tasman plays right into the hands of the loony anti-vaxxers. Taking the AstraZeneca vaccine should not be a death lottery. If this is how Australia discharges its duty of care, we might be well advised not to be entering a bubble with them. Scott Morrison – and some of the Aussie state premiers – seem to be tipping the risks and consequences right back onto the public, and saying “Hey, it is your choice. A few of you may die but only a few and if you’re lucky, it won’t be you.” Look at the big picture. That is, if you’re still alive to do so.

Frankly, we should be thanking our lucky stars that New Zealanders are not facing the same Russian roulette situation as our pals across the Tasman. Initially, we spread our bets between four different vaccines. In a particularly smart move, we switched instantly to Pfizer for our mass vaccination rollout as soon as the problems with AstraZeneca began to surface. With hindsight, that was a brave early call, given the apparent unsuitability of the Pfizer shot for vaccinating an entire population, thanks to its difficult “ cold chain” storage” requirements. As it did with its decision last year to close our borders and impose a stage four lockdown, the Ardern government seems able to make tough calls early, and to get them right.

But since we’ve now put all our eggs in the Pfizer basket, what’s its safety record? The main reported side effect with the Pfizer vaccine to date has been “anaphylactic shock” reactions of the sort normally associated with allergies, and with reactions to certain medications, including sometimes to doses of chemotherapy. As the US Center for Disease Studies reported in January, the early data from the US first round of Pfizer doses last December had found that these negative anaphylactic reactions were occurring at a rate of 11.1 per million. Further study into the allergic reactions to the Pfizer (and Moderna) mRna vaccines has just been initiated.

But if that early 11.1 per million ratio roughly holds steady for the second Pfizer dose as well, we would still be getting about 35 -40 cases here if we do manage to vaccinate about 70% of the entire population of New Zealand, or roughly 3.5 million people. In the normal hospital setting, those sort of reactions are quickly and safely treatable with a shot of a drug called epinephrine. So….every GP clinic and every vaccination site in New Zealand will have stocks of epinephrine on hand ready to go within the 15 minutes before the reaction turns deadly – and the vaccinating staff will have been trained to (a) recognise anaphylaxis and (b) administer the antidote, right? Right?

Footnote: There’s another thing New Zealanders should know about our new bubble BFF, Scott Morrison. Yesterday, Morrison continued to promote to state premiers his risky brainwave of moving to a system of home quarantine from hotel quarantine if and when Australia’s international borders are opened. The state premiers are reportedly wary about Morrison’s idea. According to the Australian New Daily online news outlet, experts have said this would increase the risk of community transmission but would free up more places for returning Australians and tourists. Good to know. We’re all in a different ball game now. One where economic opportunism, political face-saving and public safety are all being juggled in the air by our new cobber in Canberra.

Correction: In a recent Werewolf column, I mistakenly failed to mention that Andrew Little is no longer Justice Minister, and therefore, his comments about drug reform were made in his capacity as Health Minister. Kris Faafoi is now the Justice Minister.