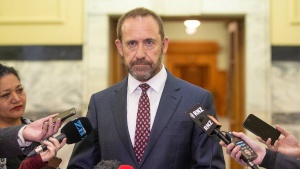 Once again, Labour has chosen not to use (a) its parliamentary majority and (b) the huge mandate it was given at the last election in order to (c) bring about progressive social change. Once again, Labour seems to regard its main purpose for being in power as being to keep National and Act out of power. Will Labour for instance, overhaul our out-dated, unsafe, and unjust laws on drugs?

No, it will not. Instead, Labour is choosing to treat last year’s non-binding referendum on the very specific, controversial issue of cannabis legalisation – which ended up with a cliff-hanger 50.7 % “No” outcome – as being the final word on the subject for the foreseeable. Reportedly, Justice Minister Andrew Little believes that the 50.7% result rules out any action by the government on lesser steps – like say, cannabis de-criminalisation – until such time as

another referendum can be put before the public:

[Justice Minister Andrew] Little said the government was now constrained by last year’s public vote on cannabis legalisation, which returned 50.7 percent in opposition. “I would interpret that as ‘no, we’re not quite ready for this level of liberalisation just yet’,” Little said. Little believed, given the referendum’s tight margin, the public would expect to have a vote on any further significant drug reform.

Oh and besides, this is not something that Little cares about all that much :

Little declined to put a time frame on when it might be appropriate to hold another vote, but noted that it was not his top priority.

Wow. So the rest of the developed world can enact sensible drug de-criminalisation and legalisation laws, and Little and the Labour government can go ahead and de-criminalise abortion without holding a referendum vote. Yet on drug reform it is hiding behind the cannabis referendum outcome, and trying to portray its reluctance as being a mark of virtue. It isn’t. And some of its allies are willing to call Labour out for it:

Green Party MP Chlöe Swarbrick, who has been trying build cross-party consensus on de-criminalisation, said she was baffled by Little’s refusal to move on drug reform. She said both the mental health inquiry and the Safe and Effective Justice review recommended an overhaul of the Misuse of Drugs Act.

“It seems like an absolute abdication of political responsibility,” she said.” What on earth is the point of being elected to Parliament and having such an overwhelming mandate, if not to undertake the things that you believe in?”

Good question. More than ever, this government looks like the dog that chased the car and having caught it, now has no idea what to do with it. Apart from the serious health and justice shortcomings of the drug policy that Little has chosen to perpetuate, his timidity isn’t even good politics. By not seizing the political agenda and enacting progressive policies, Labour is looking dead in the water. As a consequence, it is suffering the death of a thousand cuts over its competence in running managed isolation facilities and in rolling out vaccines on time.

Sure, those are important issues, but they are playing a prominent role in the current media cycle only because Labour appears unable/unwilling to lead from the front. It has a vision deficit. The Labour PM and her deputy are expert counter-punchers and are very capable micro-managers of the ambulances at the foot of the cliff. But what’s called for right now is less caring, and more daring.

Thanks to Covid, Prince Philip’s funeral will be a private affair that won’t put the British public’s alleged affection for Philip to the test in ways that a public state funeral would have done. Old news now, but the tributes for Philip have rung more than usually hollow. Some have been contradictory. Supposedly, Philip was a man who spoke his mind, said what he meant, meant what he said. Yet the ugly things he said have been reflexively passed off as “gaffes” – which my dictionary defines as being “an unintentional act or remark causing embarrassment to its originator..” Given how repeatedly Philip made racist or misogynist remarks – and they’re well documented here – you have to conclude that he was either cosmically clueless, or simply didn’t care. I’m betting on the latter. So are others:

“He was a throwback to old-school racism. Painting him as a benign, cuddly uncle of the nation is simply untrue,” said Kehinde Andrews, Professor of Black Studies at Birmingham City University, on Friday. “When he says things about Chinese people’s [“slitty”] eyes and [aboriginals] chucking spears, it’s very ugly and would not be tolerated anywhere else nor from anyone else,” Andrews told CNN.

Interestingly, Philip’s commitment to public service and to his duties as the Queen’s consort have been offered as some kind of counterweight to his public utterances. It might be more accurate to see them as having been entwined. After all, the institution that Philip served has been (historically) an instrument of the racism inherent in Britain’s colonising role, and – as the Oprah interview recently demonstrated – those racist attitudes are still very much alive within the current royal family.

Arguably then, Philip’s departure from the scene should be being treated as an opportunity to revisit the folly of New Zealand continuing to be constitutionally linked to this ghastly family, and to the Crown they serve. Prince Harry and Meghan Markle have shown that it is possible to escape. It’s time we did, too.

Footnote: Of all the tributes heaped on Philip, the Act Party outdid itself. Act’s leader, David Seymour seems to be one of those rarest of political animals, a libertarian monarchist:

[Philip] spoke plainly and joyfully, often saying what many would like to with a twinkle in his eye. We will all miss him dearly.”

Speak for yourself, man. Seymour’s contention that hey we’re all racists and misogynists at heart and that Philip “joyfully” articulated those attitudes on our behalf with a twinkle in his eye is deeply, weirdly wrong. Seymour hasn’t been the only one saying much the same in recent days. It remains one of the more disturbing aspects of Philip’s toxic legacy.

The Canadian indigenous musician, film-maker and politician Willie Dunn (1941-2013) has just had his music (much if it is from the 1970s) re-released on a compilation album called Creation Never Sleeps, Creation Never Dies by the Light in the Attic label. Here’s “Pontiac” from that collection:

And since today marks the 60th anniversary of the first human orbiting of the earth (by the Soviet cosmonaut Yuri Gagarin) here’s the British duo Public Service Broadcasting doing him proud:

Correction: I mistakenly failed to mention that Andrew Little is no longer Justice Minister, and therefore, his comments about drug reform were made in his capacity as Health Minister. Kris Faafoi is now the Justice Minister.