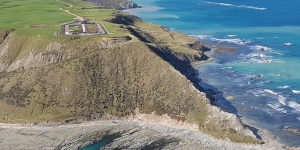 Yesterday, the government finally released a four part timetable setting out which groups will get vaccinated with the Pfizer/BioNTech vaccine and in what sequence …And yes, it did look very much like the four part plan that Australia announced in January. Since yesterday there has been quibbling about which social groups should be prioritised, and what the logistical problems will be in delivering the necessary two doses of the Pfizer vaccine, given that it needs to be stored in super cold conditions, and with a three week interval between the shots.

Fine, but there’s a weird time lag involved here. Like most of the other vaccine candidates, the Pfizer vaccine has reportedly been less successful against new variants like the South African strain. As a result, and while we’re getting the logistics in place for a two dose regime, Pfizer /BioNTech are busily gearing up for a third “booster” shot that will (presumably) make its vaccine more effective against the variants. As their press release put it :

Pfizer Inc. and BioNTech SE announced today they have begun an evaluation of the safety and immunogenicity of a third dose of the Pfizer-BioNTech COVID-19 vaccine (BNT162b2) to understand the effect of a booster on immunity against COVID-19 caused by the circulating and potential newly emerging SARS-CoV-2 variants. The study is part of the companies’ clinical development strategy to determine the effectiveness of a third dose against evolving variants.

So… The Pfizer vaccine looks like a three dose regime, not a two dose effort – and with a substantial time lag likely before the third shot that will protect us against the South African variant emerges over the horizon. In the meantime, the government probably does need to be more transparent about our current state of knowledge about just how effective the current two dose Pfizer/BioNTech vaccine will be against the UK and South African variants. Unfortunately, Pfizer/BioNTech themselves don’t really seem to know. That‘s why they want to test their “booster” version to find out. In fact, the “booster” shot sounds more like an entirely new version of the original vaccine:

…. In order to be prepared for any potential future strain changes, Pfizer and BioNTech are in ongoing discussions with regulatory authorities, including the U.S. Food and Drug Administration (FDA) and the European Medicines Agency, regarding a registration-enabling clinical study to evaluate a variant-specific vaccine having a modified mRNA sequence. This study would use a new construct of the Pfizer-BioNTech vaccine based on the B.1.351 lineage, first identified in South Africa.

Right. But in the meantime, Pfizer/BioNTech are also trying to re-assure their customers that their current product works just fine, really:

Based on in-vitro studies conducted to date and observations from real world evidence, the Companies have not observed changes to neutralizing antibody levels that would predict a significant reduction in protection provided by two doses of BNT162b2

However, that “ no significant reduction in protection” involves shifting the goalposts : to where the vaccine is seen mainly as a shield against serious hospitalisation and death. Which is progress. No question, stopping the disease from progressing to serious illness and death is a desirable quality – but it is not the firewall against the virus that the public had hoped the vaccines would provide, especially since the vaccine that we will be getting is already known to be less effective against the South African variant. ( Those upbeat 95% efficacy rates apply to lab tests against the original virus.)

After all… Logically, if everything really was hunky dory with the protection provided by the two dose version, why would Pfizer/BioNTtech be now racing to develop their third “booster” version of their vaccine? Moreover… Has New Zealand had any signals from Pfizer/BioNTech that we will have access to its booster version, once that has gone through its testing/trialling hoops, and reaches the market – and at what additional cost?

Aussie, Aussie
Embarrassing to see National Party leader Judith Collins praising Australian PM Scott Morrison for offering leadership in managing Covid. Really? Early on in the pandemic, Australia’s relatively open economy resulted in over 900 deaths and their recent success in controlling the disease (via lockdowns, enhanced contact tracing and stamping out community outbreaks) has been the outcome of Australia acting more like New Zealand, not less like it.

As Covid Minister Chris Hipkins pointed out yesterday, it has been Australia that has been reluctant about the travel bubble, not us – so much so that the emphasis has now shifted to New Zealand negotiating bubbles with individual states. That was the context of Morrison’s crack at New Zealand. He was publicising a support package for Aussie domestic tourism . Morrison was exhorting Aussies to go to Cairns, not to Queenstown. Somehow, Collins interpreted that as being good for Queenstown.

Moreover… When Auckland had its recent community outbreak, Australia immediately slammed its doors shut to travellers from New Zealand, and re-imposed managed isolation requirements etc. To be consistent, we would need to do the same at the first sign of community cases across the Tasman, in order to ensure we didn’t import the disease. Point being: local tourism operators seem to think that a trans Tasman “travel bubble” would be a return to normality. It wouldn’t. It would be a tentative, conditional arrangement prone to regular disruptions originating on both sides of the Tasman..

Footnote
Judith Collins holding up Scott Morrison as an example of strong leadership seems particularly bizarre right now. For weeks, Morrison has shown a distinct lack of leadership and political courage in his handling of the allegations made by parliamentary worker Brittany Higgins that she was raped two years ago in the office of Defence Minister Linda Reynolds, by one of Reynolds’ staff.

Reynolds subsequently accused Higgins of being a ‘lying cow’ but has since apologised for the comment. The Liberal Party has used social media to attack Higgins, but has since taken down the postings. Throughout, Morrison has claimed that he heard about the rape claim for the first time only in mid-February 2021. Yeah right. Morrison has also been a gawking bystander with respect to the historic rape allegations against his Attorney General Christian Porter, an incident that led to the subsequent suicide of the victim. Morrison says he hasn’t even read the 30 pages of evidence against Porter – and his compassion for Higgins seemed to begin and end when he said that his wife had reminded him that it would be terrible if such a thing ever happened to one of his own daughters.

A few weeks ago, there was a scandal over Air New Zealand making money from doing work for the Saudi military. This month, Rocket Lab – originally a Kiwi firm until it got taken over by American interests – is due to launch its next satellite payload into space. Reportedly, the March launch will include a war fighting package called Gunsmoke J, described here in these terms:
Gunsmoke-J, formerly named Jacob’s Ladder, are experimental 3U CubeSats designed by the US Army SMDC (Space Missile Defense Command) to demonstrate advanced information collection in direct support of the Army combat operations. The satellites consist of a LANL built Prometheus Block-2 1.5U CubeSat featuring the attached 1.5U Gunsmoke-J experiment module….Gunsmoke-J uses emerging advanced electronics to allow the use of dedicated intelligence assets to provide tactically actionable targeting data to warfighters on a responsive and persistent timeline.

A Space News story in February was headlined “U.S. Army satellite to bring imagery directly to troops on the ground..” It included this :

The experimental spacecraft named Gunsmoke-J is one of seven satellites that will lift off from New Zealand in mid-March in Rocket Lab’s 19th Electron launch. The payloads will be deployed to orbits between 450 kilometers and 550 kilometers above Earth. The Army Space and Missile Defense Command has been working on Gunsmoke-J for several years. About the size of a loaf of bread, the satellite is part of a larger Army effort to demonstrate overhead data collection in direct support of combat operations.

Lira Frye, a spokeswoman for the Army Space and Missile Defense Command, said Gunsmoke-J is a demonstration of technologies “that could assist the ground force commander in long-range precision fires and other activities.”

So basically, the Rocket Lab launch site on the Mahia peninsula in Hawke’s Bay is being used to enhance the Pentagon’s battle field competence at killing the opponents of US foreign policy. The Green Party has weighed in on this issue, calling it a breach of national security. No response yet from a Labour government which – back in the mid 1980s – once made a thing about not being an accomplice of US military geo-politics.