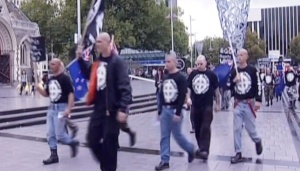 All very well to talk about “modernising” our terrorism legislation (hey, it was written back in 2002 in the wake of 9/11) in order to target violent white nationalist groups. True enough, our current list of designated terrorist organisations does merely import the UN’s list of terrorist entities. (We like to be seen to be good global citizens.) Yet chances are, there probably aren’t all that many Kiwis out there who are itching to join the Shining Path group in Peru.

Even so, this “modernising” of the definition of a terrorist is easier said than done. That is, if we want to be careful that any new definition doesn’t let current and future governments misuse the new label (and the broader designation powers) for their own purposes. And besides….surely in this age of Internet recruitment, are terrorist “ groups” really the prime concern? Arguably, the main terrorist threats are being planned and carried out by “lone wolf” agents who may be orbiting around a similar set of shared beliefs, but who tend to act out those beliefs according to their own timetable.

Besides, these deadly loners may also lack the usual political agendas. White nationalist ideologies are only one dimension of the terrorist problem posed by young (usually white) men. Today and tomorrow’s terrorist acts can be the sexualised violence committed by men who can’t find women willing to have sex with them. The Toronto truck terrorist for instance, was an “incel” ( ie an involuntarily celibate person,) and his stated motive was retribution for being “forced” to live in that anger-inducing state.

Similarly, last week’s anti-Asian massage parlour terrorist acts in Atlanta were committed by a 21 year old man who had been radicalised by Christian teachings that led him to act violently against what he saw as lust-inducing sites of sexual temptation that were posing a danger to his immortal soul. Good luck then, with trying to write a modern definition of terrorism that’s broad enough to include Christian teachings about “no sex before marriage.” Evidently, there are other forms of ‘sex addiction” besides the one from which Michael Douglas used to suffer, and they’re far more dangerous to women.

Anyone taking a good look at section 5 of the 2002 Terrorism Suppression Act can see how hard it is to adequately define key concepts like “ terrorism” or “terrorist acts” or “terrorist outcomes” without trampling all over the freedom to dissent. The Act explicitly recognises the problem at section 5 (clause 5) when it says : “To avoid doubt, the fact that a person engages in any protest, advocacy, or dissent, or engages in any strike, lockout, or other industrial action, is not, by itself, a sufficient basis for inferring that the person” was aiming to commit a terrorist act or to cause a terrorising outcome.

For the record, terrorist acts mean those violent acts committed for “ political, ideological or religious” reasons. Terrorist outcomes are such acts that cause harm to persons, to property, to the environment or to the national economy via the deliberate spread of harmful organisms. Interestingly, and as written explicitly in the Act, any form of the dissent protest and industrial action listed above is not “of itself” proof of a terrorist intent or of a terrorist outcome. It could be. But it wouldn’t be necessarily – unless further evidence suggested otherwise. Point being, the existing definitions are pretty broad already. And it is hard to see how “expanding” them wouldn’t infringe on the genuine, democratic forms of protest, dissent, and industrial action.

To some, the problem isn’t with the definition, but in the reluctance to designate. Reportedly, Brenton Tarrant is the only white nationalist designated by the Prime Minister (under the terms of the Act) as a terrorist. Some analysts are seeing the lack of designation of white nationalist groups as a political failing, and not so much one that’s reflective of a too narrow definition of what constitutes terrorism. Really? The authorities are not usually shy about using the powers conferred on them. If we go further down this road then in no time at all, it seems safe to predict that a future government will be designating the Mongrel Mob as a terrorist group in order to seize their bikes and close their club houses. Some people (and political parties) would see that as being good populist politics. Yet enough laws already exist that enable Police to seize any private property that has been accumulated via criminal acts. We don’t need to give the authorities further powers in this area.

Ultimately, society will not be any safer if we create a broader definition of terrorism and designate more local groups as “ terrorist” organisations whose membership dues and social activities can be criminalised. As mentioned, modern terrorists tend to be lone wolf actors radicalised on Internet forums that the SIS – as the Royal Commission has noted – appears to be incapable of monitoring in a competent fashion. For example : the recent bomb threat made against two Christchurch mosques was posted on the notorious 4chan website, but was detected by members of the public who notified the Police. The threat had not been noticed at all by our well-funded security services. That would seem to be the problem worth addressing. Fixing the gaps in our ability to detect and respond to online threats looks like a far more urgent priority than any shortcomings in our terrorism laws, definitions and designations.

Bolger, Obama, Ardern
Talking about gradual radicalisation… The evolution of former PM Jim Bolger has been an interesting process to behold. Like Jimmy Carter, Bolger has been a more interesting figure out of office than while in it. Besides recently calling for a capital gains tax and a more equitable tax system in general, Bolger has also become a strong advocate on behalf of those people who, in his words, are “falling off the edge of society”. That’s ironic, given that the benefit cuts enacted under his leadership have done so much of the social and personal harms that he currently laments.

When pressed on this point – the exchange begins around 14 minutes into this RNZ interview a few weeks ago – Bolger claimed the benefit cuts seemed to be necessary at the time, given the state of the economy that he inherited:

“We had to take some very substantive steps to bring the economy back. I mean, the Rogernomics era destroyed the economy. I’m sorry. I know there’s a lot of New Zealanders who still don’t believe it, but that’s the facts of life. And go back and check the figures if you don’t believe me. You don’t have to believe me…”

The evils of Rogernomics aside, Bolger did concede that maybe he and his colleagues did “overcorrect.” ( All those years ago, was Bolger really the captive of the neo-liberal zealots in his caucus?) Now, 30 years later, he wants to see action on behalf of those at the bottom who are missing out. “ I‘m getting a bit tired of passionate speeches from some leaders, and nothing is happening.” Oddly enough, this contrast between old and uncool politicians calling for radical change, and charismatic younger politicians paralysed by the political risks this might entail, is being played out right now in the US.

In particular, they’re playing out between a Joe Biden who had long been patronised as an old compromising hack and windbag by the cool kids in the Obama administration. Oddly enough though, it seems to be Biden who is enacting the more radical policies. This New York Times column contrasts Biden and Obama, and concludes with a point that’s relevant here, with respect to the Ardern administration:

Obama’s failure to go big and to send the tumbrels rolling down Wall Street certainly greased the runway for Donald Trump. The paradox of Obama is that Americans embraced radical change by electing him but then he held himself in check, mistakenly believing that he was all the change they could handle.

Six months after an election that has given Labour the chance to go big, Jacinda Ardern is holding back in the same way, in the mistaken belief that she is all the change that we can handle. Maybe she should be listening more to old Uncle Jim.