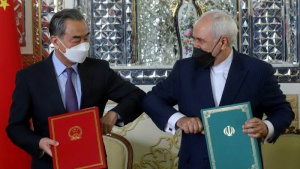 One of the most significant developments in global politics in a generation has flown in almost entirely beneath the radar of the Western media. On Saturday, Iran and China officially signed a 25 year, $400 billion co-operation pact. As one expert regional analyst has said, this deal will give East Asia its biggest presence in the Middle East since the Mongol invasion seven hundred years ago. It marks another major diplomatic setback for the United States, which is still reeling from the harm done by the Trump administration.

Instead of opening up Iran to trade with the West – as US President Barack Obama had hoped to do with the 2015 nuclear deal – the reverse has happened. By tearing up the nuclear deal, and joining forces with Saudi Arabia in demonising Iran, Donald Trump succeeded only in pushing Iran straight into the arms of China, which has seized the opportunity with both hands. As Middle East expert Juan Cole says:

China’s entry into Iran in such a big way is the most consequential change in the geopolitics of the Middle East since the fall of the Berlin Wall and the collapse of the Soviet Union, which made the US the sole Middle East superpower (this was visible in the 1991 Gulf War and the 2003 unilateral US war on Iraq). Moscow’s return as a patron for the Baath regime in Syria is small potatoes in comparison.

So far, the Biden administration has been unable to decide how to re-configure its Iran policy, in order to undo the damage done by his predecessor. China, Russia and Iran though are not waiting around for the US – and for other Western countries, including New Zealand – to make their minds up about how to re-normalise trade and diplomatic links with Teheran. When the China deal was first mooted back in September 2019, the Petrochemical Economist journal reported at the time that the pact would have economic, cultural and security dimensions including the stationing of up to 5,000 Chinese “security personnel” inside the country, ostensibly “to protect energy and petrochemical assets.”

All along the fear has been that China will provide the mullahs with a system of internal surveillance in several of Iran’s major cities, akin to what China has imposed on the Uighurs in Xinjiang province:

Beijing’s strategic vision for Iran [is] as a fully-functioning client state of China by the end of the 25-year period. By that time, Iran will be an irreplaceable geographical and geopolitical foundation stone in Beijing’s ‘One Belt, One Road’ project, as well as providing a large pool of young, well-educated, relatively cheap labour for Chinese industry. The mass surveillance, monitoring, and control systems to cover Iran’s population is to begin its full roll-out as from the second week of November[2020]…

In the short term, the China deal will provide Iran with the market it desperately needs for its oil and gas exports. It will also deliver the foreign capital Iran needs to upgrade its transport and manufacturing capacity. This won’t be an act of charity on China’s part :

In return for making the capital available, Chinese companies will be given first refusal on oil and gas projects. For its part, Iran is hoping to improve its diplomatic and economic position, and to restart a number of energy project that were stalled by the re-imposition of US sanctions last year, such as the giant South Pars gas field.

Those gas exports will then become central to China’s efforts to green its economy. As Juan Cole says:

On China’s side, it locks in an assured source of petroleum and natural gas for the next quarter-century, as China moves toward its 2060 goal of net carbon zero. It may be that China hopes initially to replace its coal plants, which now generate 60% of its energy, with Iranian natural gas, which would be half as carbon intensive, as a first step toward moving entirely to green energy.

All up, China is likely to turn out to have been an even bigger beneficiary of the idiotic policies of the Trump administration than Russia has been. Thanks to Trump’s stupidity, the map of the Middle East has been rewritten, the iron grip of the mullahs has been strengthened, and the Chinese economy has been handed on a plate a reliable source of cheap, relatively green energy for the next 25 years. It doesn’t stop there. When it comes to diplomatic clout and force projection, China now has a major client state and military platform in a vital region of global politics where it never had a significant presence beforehand. Unfortunately, things have moved past the point where the Biden administration can repair the damage that Trump has done.

Is it important – as National claims- for the government to announce a target number for what percentage of the population it aims to vaccinate? No. Any such target would be arbitrary, and would be roundly criticised as such. The real target is “as many as possible” given that (a) some people will choose not to avail themselves of the opportunity, and (b) problems could arise with vaccine deliveries and (c) an outbreak of community transmission would render an arbitrary target even more meaningless than it would be at the outset. Ultimately, the setting of a target wouldn’t add a single New Zealander to the queue of those lining up to be vaccinated. Plus, the assumption that health workers need an arbitrary vaccination target to do their job properly is pretty insulting.

Still, one can see why National wants a target to be set, since this would provide it with a political club with which to beat the government. Set the target too high, and the government has failed. Set it too low and the government lacks ambition. The entire premise is wrong. Despite the thrashing National received at the last election, it evidently hasn’t learned that the public opposes the fight against Covid being turned into an arena kitted out for the scoring of cheap political points.

Here’s the reality: the Ardern government didn’t invent Covid. It hasn’t willfully imposed lockdowns on the population. It cannot magically provide the tourism sector with a sustainable source of income to replace everything that the sector has lost from the collapse of international tourism. (Sometimes bad things happen to good people). Similarly, the government cannot unilaterally declare a trans-Tasman bubble with multiple Australian states and territories without ensuring compliance and safeguards and responsibilities are in place in the light of a community outbreak occurring on either side of the Tasman. (Who then looks after the foreign tourists stranded indefinitely by a sudden lockdown, who pays the bill etc.) No government can ensure that such a bubble will deliver an irreversible return to the normality that existed, pre-Covid.

This doesn’t mean that the government is exempt from criticism. It does mean that not every inconvenience caused by the pandemic is the product of a culpable failing on the part of government. We happen to be in the midst of a crisis. The rest of the world thinks we’re handling that crisis pretty well, and wish they could be here. Conjuring up bad faith, stoking resentment and inflating petty examples of human error is precisely the approach the electorate rejected last October.

So, no…. We don’t need a vaccination target to do the job properly. Science suggests that herd immunity requires a level of vaccination higher than the roughly 70% one we are likely to achieve with the Covid vaccinations, given the level of anti-vaxx mis-information that’s out there. Moreover – and crucially – the success we have had to date in managing this crisis has meant that we haven’t experienced the deaths, severe illness and anxiety on the scale seen overseas. Elsewhere, getting vaccinated is seen to be literally a matter of life and death. It has been our very success that is lulling so many into thinking that getting vaccinated is a lifestyle option. It isn’t.