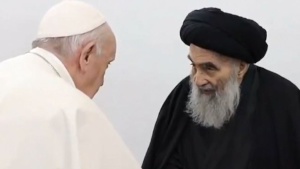 As an exercise in global symbolic politics, it would be hard to top last week’s meeting in Iraq between Pope Francis and the most respected cleric in Shia Islam, the Grand Ayatollah Ali al-Sistani. Both men have strong liberal credentials. Francis has led a welcome break from his policies of his two arch-conservative predecessors. In fact, you would have to go all the way back to the early 1960s, to the widely loved liberal reformer Papa Roncalli (aka John XXIII) to find a Pope who seems more in tune with socially progressive forces.

The 94 year old al-Sistani is a more complex figure. His credentials as the most learned religious authority in Shia Islam are undisputed. From his humble home in Najaf, Iraq, al-Sistani condemned the disastrous US invasion of 2003 at the time. In 2014, he famously issued a fatwa that called on all able bodied Shi’ite volunteers to join the militias fighting against Islamic State. In the process, he urged tolerance towards all religious minorities, including the Christian and Yazidi populations that Islamic State and other Sunni fundamentalists had been targeting. He also supported the 2009 Green Revolution in Iran that eventually failed to expand the role of secular democracy in that country. Consistently, al-Sistani has opposed the involvement in politics by the mullahs in Iran. Correctly, he pointed out that the blurring of the lines between religious authority and political power would eventually end up discrediting religion in the eyes of the public.

Like Pope Francis though, al-Sistani is not a figure without controversy. Last year, the popular Iranian dissident and blogger Ruhollah Zam was lured out of his refuge in France on the (bogus) promise of a meeting with al-Sistani. Once in Iraq, Zam was seized by Iranian security forces, taken back to Iran and executed. While al-Sistani was not an accomplice in the trap, he has been criticised for not appealing (even only symbolically) to his fellow Shi’a ayatollahs in Tehran to spare Zam’s life. Many Iranians believe that the office of al-Sistani’s son-in-law Javad Shahrestanii (who is al-Sistani’s representative in Iran) was involved in the Zam plot

In similar vein, al-Sistani has never condemned the harsh retribution carried out against the supporters of the 2009 Green Revolution. Hundreds of young Iranians were executed in the aftermath of that social movement. Having supported the attempt at opening Iran up to greater democracy, al-Sistani remained silent while those who believed in it were hunted down, tortured and eliminated. Pope Francis has also had his critics. Some Catholic conservatives feel he has strayed too far from the path of orthodoxy, while some liberal critics feel that (a) his reforms have not gone far enough, and (b) have not been entrenched in ways that will survive his papacy. (Francis replied to some of his critics in this memorable statement in September, 2019.)

Their joint agenda
All of that aside, what did Francis and al-Sistani talk about in Najaf? Part of their conversation was private. Their joint public statement made the expected calls for tolerance and mutual understanding. Francis was in Iraq partly because of the steep decline in Iraq’s Catholic congregation which had flourished under the secular reign of Saddam Hussein. Since the 2003 invasion, the Catholic congregation has shrunk from 1.5 million to barely 250,000 believers today. Sectarian conflict sent many Catholics fleeing into exile abroad, while many of those that remained inside Iraq were systematically persecuted and driven underground during the hey-day of the IS caliphate.

By meeting with al-Sistani and issuing calls for mutual tolerance and respect, Francis was hoping to convince Catholics in Iraq that they had not been abandoned. For al-Sistani’s part, there might have been some hope that Pope Francis might have greater sway with the Catholic president now occupying the White House. Pointedly, the joint communique urged the lifting of “economic blockades” throughout the region. Exactly one year ago, Iranian clerics had delivered a letter to Pope Francis asking for his help in ending the US economic sanctions against Iran that have inflicted so much harm on ordinary people, especially during the Covid pandemic:

On March 22 [2020] an Iranian Shiite leader, the Ayatollah Seyed Mostafa Mohaghegh Damad, delivered a letter to Pope Francis imploring his intervention to end economic sanctions against Iran as it endures one of the world’s worst Covid-19 outbreaks.

The Iranian people, he wrote, “are struggling painfully with the loss of loved ones caused very often by the serious lack of medical resources due to the consequences of sanctions imposed by the United States.” Suspending the sanctions regime he called “a humanitarian action” proper to those who believe in Jesus, who “for the whole world is a universal symbol of peace and love.”

Lifting the US sanctions
So far, the lifting of US sanctions against Iran and has proved to be more difficult than Biden had originally supposed. Biden clearly wants to lift the sanctions against Iran, if only to re-balance US policy towards Saudi Arabia, and to stop Iran from being driven into the arms of China. Yet at the same time, Biden has felt the need to avoid a domestic backlash from looking soft on the mullahs, so…. any steps to normalise relations apparently will have to be done by both sides, simultaneously. That’s not an easy dance to co-ordinate. Also, the mullahs clearly don’t want to hand a political victory to the relatively liberal administration of Hassan Rouhani, only months before the next general elections in Iran, due mid year.

So the mullahs have been playing a spoiler role. That’s something they can economically afford to do, since they control the smuggling trade that has flourished under the US sanctions, while ordinary Iranians have suffered. As al-Sistani correctly predicted, the political strategizing by the mullahs has had an extremely corrosive effect on religious authority. Caught between mindless US hostility and the iron rule of the mullahs, Iranian society has simply imploded.

Footnote: Ironically, Pope Francis’ response to his critics ( link above) had a few pointers to offer as to why PM Jacinda Ardern has cancelled her weekly “interview” with Newstalk’s Mike Hosking. Francis made a useful distinction between criticism made in good faith, and criticism made from a fixed position that has no interest in dialogue:

Criticism is a component in construction, and if your criticism is unjust, be prepared to receive a response, and get into dialogue, and arrive to the right conclusion. This is the dynamic of true criticism. The [other] kind of] criticism instead…..is like throwing the stone and then hiding your hand. This is not beneficial, it is no help. It helps small cliques, who do not want to hear the response to their criticism. Instead, fair criticism….is open to a response. This is constructive….[But] to criticize without wanting to hear a response and without getting into dialogue is not to have the [general] good at heart, it is chasing after a fixed idea.”

Chasing after fixed ideas. Serving ideas held by small cliques. Criticising without wanting to hear the response. Yep, all of that sounds like Mike Hosking. His weekly browbeating of Ardern – like his previous bootlicking of John Key – has had nothing to do with dialogue, or with journalism. Journalism is about talking truth to power, not talking nonstop about the power of your own truths. There was no social benefit in having Hosking use his audience with the PM to expound on his own ideological fixations, as if by some god-given right. We all, Ardern included, have better things to do.

Iran, Artistry
One of the great forces in traditional Persian music – the singer Mohammed Reza Shajarian – died in October 2020 at the age of 80. A supporter of the 2009 Green Revolution, Shajarian earned the wrath of the mullahs for doing so, but was protected to some extent by the reverence with which he was publicly regarded. Here’s Shajarian in 2013, recorded during one of those typically intimate 15 minute Tiny Desk Concerts for NPR.