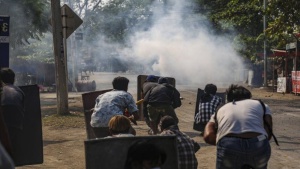 During yesterday’s protests in Myanmar over 50 demonstrators were shot dead, one police officer died, and several Chinese owned factories were set on fire. Among other things, this escalation marked a tactical shift by the democracy movement. Until recently, the passive, resistance of the protesters was an appeal to foreign powers to do something significant to bring the military junta to heel, and to give the country’s imperfect experiment with democratic rule an opportunity to resume.

Yet despite all of the fine words in support of democracy, the outside world plainly has no appetite for armed intervention to stop the carnage, and there is little willingness (especially among Myanmar’s ASEAN neighbours ) to even apply much in the way of diplomatic pressure. If the coup leaders are ever going to change course, it will need to be because of economic factors, not humanitarian ones.

China/Hong Kong is the biggest source of foreign investment in Myanmar, closely followed by Singapore. Significantly…most of the protesters killed yesterday were demonstrating outside burning Chinese-owned factories, and that’s because China is viewed by the protest movement as the junta’s main superpower ally. Only by deterring foreign investors and pushing the economy over a cliff can the protesters hope to make significant gains.

Even before the coup, Myanmar was seen to be a high risk/get rich quick zone for low wage manufacturing firms geared for export. Well known Western firms using Myanmar’s cheap labour force include the luggage-maker Samsonite, the clothing firm LL Bean and the fashion retailer H& M. A small tier of its 54 million people are also seen to be an emerging market for a range of consumer goods from motorbikes to smart phones. Foreign investment was running at $US5.5billion in the last fiscal year, down from the peak of $US9. 5 billion in 2015.15, but still well above the circa $US1.4billion recorded eight years ago, when the country first opened itself up to foreign investors and trade. GDP growth last year was only 1.7%, so the economy wasn’t exactly in robust shape, even before the February 1st coup.

While the West has made much of the noise about the demise of democracy in Myanmar, the ASEAN countries have been more muted in their response.
While China remains Myanmar’s largest trading partner, its biggest foreign investor last year was Singapore. Japan, South Korea and Thailand have also poured money into the country, making it much less isolated than it was during the decades of military rule. In their public statements, the Chinese have gone to extraordinary rhetorical lengths to avoid even a hint of criticism, with the state news agency, Xinhua, [initially] referring to the coup as a “major Cabinet reshuffle.”

Since then, China has also blocked a UN Security Council statement condemning the military crackdown. As the BBC has noted, China and Russia have also shielded Myanmar from UN criticism of its oppression of the Rohingya population. Not that China is thrilled about the coup. That may be because even Myanmar’s constrained version of democracy was a better option for China than dealing with the prickly, paranoid rule of the generals. As Foreign Policy put it recently: “

For China, Aung San Suu Kyi is by far a more reliable economic and political partner than the Myanmar military—also known as the Tatmadaw. Others have argued that the Tatmadaw’s relative willingness to reject China’s economic advances—such as former President Thein Sein’s suspension of the $3.6 billion Myitsone Dam project in 2011—show it’s not a good partner for Beijing. But Chinese attitudes toward the military may have actually warmed in recent years. Where the narrative that the military is a friend of the Chinese crumbles is when realpolitik comes into play. In short, the Myanmar military remains more shielded and independent from Chinese influence than the democratically elected government—and that’s bad news for Beijing.

Well yes, but that’s now water under the bridge. Briskly defending the generals at the UN is one way that China can try to win the hearts and minds of the junta, even if some of the generals will remain deeply suspicious of China’s longer tern intentions. Right now though, China needs the generals to protect Chinese-owned property from being burned down, while the generals need China to provide diplomatic cover for their atrocities. For now, they need each other. The protestors though, are on their own.

Footnote: For a glimpse into the mindset of the Myanmar military, this three minute drone overflight of the country’s bizarre new capital city is worth your while.

BTS and its critics

For a programme that has been going gaga for weeks over a yacht race, RNZ’s Morning Report is on shaky ground when it comes to mocking other forms of transient pleasure. But yesterday morning, we got these pearls of wisdom (about the South Korean band BTS) from RNZ business editor Gyles Beckford:

“You should explain what K-pop is. Korean pop. They’re a boy band. They look pretty. They sing well. They’re mass produced, they’re highly successful, and they’ll be replaced next month.”

Good grief. Keep in mind that 90 % of Beckford’s working day is devoted to tracking the hourly ups and downs of the US share-market, whose investors have the attention span of a demented butterfly. The hourly movements in the Dow Jones are a topic of deep interest to only those few New Zealanders who look to the US share-market for guidance on how they should be thinking and acting, every morning. On the fickleness spectrum, Beckford and his audience make BTS fans look like pillars of stability and critical independence.

The Morning Report stance is worth a rebuttal, if only because it is so typical. BTS made their smash debut over seven years ago, and they’ve been the most popular band in the world for the past four years, and their fandom now has outreach. As Werewolf reported last year:

Highly organised armies of Korean pop fans have successfully weaponised their online power and thrown it in behind the Black Lives Matter movement. First, the fans raided the Dallas police protest surveillance app and filled it with K-pop idol chat and videos. Then they raided and occupied the racist White Lives Matter website and similarly flooded it with memes and videos of favourite K-pop idols. Then – famously – some of the estimated 90 million K-pop fans worldwide flooded the website for Donald Trump’s campaign rally in Tulsa with fake registration requests that lulled Team Trump into bragging that there’d been a million requests for tickets from people clamouring to hear the President, before reality struck in the shape of a half empty arena.

Evidently, click activism can have real life consequences. Plus, there’s this: :

As mentioned in this column a while ago, some fans of the band BTS, the Korean pop industry’s colossus, have organised themselves to buy BTS merchandise and give it away, while the An Album For Every Army sub-unit buys BTS albums and distributes them it to their less fortunate fellow fans who love the band just as much, but who can’t afford the price tab. The BTS fan machine is well described here and even better, here.

No doubt, there is a dark side to the K-pop story, as has become evident over the past 18 months. As Werewolf indicated:

As in many other cultural industries, the stories of misogyny, anti-black and anti-queer practices are also common in K-pop. The gruelling process of grooming and training K-pop idols in music and dance make the youth involved ripe for all forms of exploitation. Inevitably, this legacy has served to complicate K-pop’s relationship with Black Lives Matter. Initial point being – a lot of K-pop imitates, borrows, or steals outright from r&b, and from hip hop. In that sense, the online activism could be seen as a belated form of payback, for K-pop’s ongoing acts of cultural larceny. Even a casual glance at the videos shows that K-pop is full of hoodie cosplay, plus the fade cuts, the corn-rows, the chains, the dollar sticks, the gangsta content, the faux black voices and….how exactly is this to be read ? Is it sincere mimicry/adaptation, or rankly offensive daylight robbery. ?

Even that judgement though, isn’t a straightforward matter. Some of the commentary on K-pop has made a useful distinction between (a) appropriation, whereby someone sees or hears something and thinks “I’m going to steal that” and (b) mis-appropriation, whereby a musical and cultural style has become so prevalent in global culture as to make any claims to original ownership almost beside the point – given how such content is now seen to comprise signifiers of cool for entire generations, worldwide.

Yes, BTS and a lot of other K-pop acts have carried out acts of appropriation/misappropriation over the years. So did a lot of ‘Pacific reggae’ musicians before them with regard to a musical culture created in Jamaica, and much of early New Zealand hip hop used to treat south Auckland as being virtually synonymous with South Central L.A. (Arguably, being a member of an indigenous culture doesn’t convey an automatic licence to ‘mis-appropriate’ – in the sense above – the music and the cultural stylings of another indigenous culture.)

But back to BTS. As Vox News reported over a year ago, BTS is an underdog story of a South Korean band successfully taking on the world. While their music/dance/connection with fans is distinctive, it is the scale of their success that sets them apart – and not only from other K-pop bands, but even from other music industry titans like Taylor Swift and Beyonce. Here are a few figures that Beckford might be able to grasp. In 2019, BTS reportedly brought $4.65 billion into the South Korean economy through physical album sales, concert tickets, and branded merchandise. The band is currently worth 0.3 percent of the country’s entire gross domestic product and by 2023, it is projected to have contributed $48 billion to the South Korean economy. In 2018, a report by the Hyundai Research Institute (HRI) think tank contained some even more staggering figures.

Overall, HRI estimated that 796,000 foreigners (on average) had been visiting South Korea for BTS-related reasons in every year since the group’s debut in 2013. BTS-related exports totalled US$1.12 billion in 2019, including US$233.98 million in clothing and accessories,US$426.64 million in cosmetics and US$456.49 million in foodstuffs, over the same period. In short, BTS is estimated to have been responsible for 7.6 percent of the 10.4 million foreign tourists who visited South Korea in 2018 and for 1.7 percent of consumer exports during that year.
Of course, none of this is worth the attention of serious men of commerce with their minds on issues of lasting moment, like share-market swings and yacht races. Vox News has a good explanation as to how this is such a common response :

….Skepticism and resistance to their status as the world’s biggest pop stars still persist on the grounds of their “boy band” label, the (wrongful) assumption that their fan base is fuelled solely by teenage devotion, and xenophobia from an industry traditionally dominated by white Western stars.

Yep, that makes sense, especially the xenophobia bit. Here from 2017, is the Steve Aoki remix of the BTS hit “Mic Drop” which harks back to that early reliance on hip hop tropes, while pointing forward to the global domination that by then, was already in train: