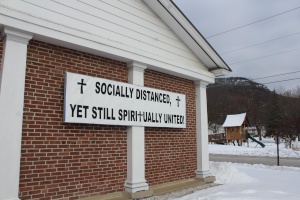 Quite the switch. Barely three months ago, the government was priding itself on cannily spreading its vaccine bets between Pfizer, AstraZeneca, Novovaxx and the Johnson and Johnson vaccine being produced by its subsidiary, Janssen. It had seemed like a good idea to have supply contracts in place with almost the entire field given the uncertainties about (a) the supply chains, given the fierce global demand for the vaccines (b) the unproven effectiveness rates against the virus and its variants and (c) the logistical challenges posed by each vaccine. Janssen is a single were single shot vaccine that can be stored in a fridge. Most of the others required two doses, and while Astrazeneca vaccine could be stored in a fridge, the Pfizeer required a super cold storage chain all the way from the lab to the delivery point.

That cold chain requirement had initially seemed to rule out using the Pfizer vaccine as the main ingredient in a mass vaccination programme. Yet now, apparently not. Yesterday the government put almost all of its chips on the Pfizer vaccine and announced it had bought up 8.5 million doses, enough for all 4.25 million New Zealanders. So why has this decision been made? It isn’t “simpler” (logistically speaking) to have one vaccine. All of the vaccines are extracted from a vial, with a syringe. If anything, the Pfizer vaccine is harder to deliver in a mass vaccination setting, and not merely because of the cold chain requirement. As Werewolf pointed out in January, the Pfizer vaccine requires a special syringe (and dexterity in using it) in order to extract all of the six doses that Pfizer claims is contained in each of its vials.

In early January, and after a fierce battle with the US Food and Drug Administration, Pfizer successfully won a crucial word change to its contracts whereby the FDA grudgingly and formally conceded that each vial contains six shots, even though it takes a special “ low dead volume” syringe (and ability in using it) to extract that last shot. In addition, not every hospital or vaccinator has that equipment and the necessary extraction skills readily available.

In short, you can’t really make a case for the Pfizer vaccination on the basis of it being logistically simpler. It isn’t. The rate of spillage and waste will be higher. Also, Pfizer conceded in February that its vaccine is significantly less effective against the South African variant.

• A laboratory study suggests that the South African variant of the coronavirus may reduce antibody protection from the Pfizer/BioNTech vaccine by two-thirds, and it is not clear if the shot will be effective against the mutation, the companies said on Wednesday. The study found the vaccine was still able to neutralize the virus and there is not yet evidence from trials in people that the variant reduces vaccine protection, the companies said. Still, they are making investments and talking to regulators about developing an updated version of their mRNA vaccine or a booster shot, if needed.

Will we be getting by July that “updated version of their MRNA vaccine”? . Probably not, since it has yet to be developed by Pfizer, tested, and made available on the market. What we’re getting will not be as effective against the South African variant. The real reasons why we have doubled down Pfizer are not so much because of its omherent virtues, but because the supply chain/efficacy problems with some of its rivals appear to be even greater. For example :

(b) In an entirely separate dispute, some elements in the Catholic Church have put a moral question mark over Johnson & Johnson’s Janssen vaccine by linking it to the abortion issue. This has to do with the alleged role of “abortion cell lines” in the production and testing of Covid vaccines in general, and with the Janssen vaccine in particular. . Here’s an extract from the US Catholic Bishops’ press statement published on their website

Can all of this be justified for the greater good of saving lives during a pandemic.? Emphatically yes, says the Vatican. The Vatican watchdog on doctrinal and ethical issues – the Congregation for the Doctrine of the Faith – has weighed in to make the point that the saving of lives during a pandemic over-rides any moral qualms to do with the use of “abortion derived cell lines” in Covid vaccine development. As the USCCB press statement concedes:

The Congregation for the Doctrine of the Faith has judged that ‘when ethically irreproachable Covid-19 vaccines are not available … it is morally acceptable to receive Covid-19 vaccines that have used cell lines from aborted fetuses in their research and production process. However, if one can choose among equally safe and effective COVID-19 vaccines, the vaccine with the least connection to abortion-derived cell lines should be chosen. “

In other words, if Catholics have the ability to choose a vaccine, the Pfizer vaccine should be chosen over the Janssen vaccine, as the more moral option:“While we should continue to insist that pharmaceutical companies stop using abortion-derived cell lines, given the world-wide suffering that this pandemic is causing, we affirm again that being vaccinated can be an act of charity that serves the common good.”

Clearly, the New Zealand government has chosen not to risk this battle. At a time when polls suggest that (already)one in five New Zealanders are susceptible to anti-vaxx messaging – on the spectrum from outright hostility to persuadable anxiety – the last thing the government would want is to have its vaccination drive being re-framed by Catholic anti-vaxxers as ( inaccurately) inviting people to be injected with cells from aborted fetuses. By comparison, the Pfizer vaccine (while imperfect) does look like a safer bet, as much as on moral/political grounds as on epidemiological grounds.

Footnote. For the record, a brief history of the development of vaccines in the laboratory from human cell tissue can be found here. The development of a vaccine to prevent the terrible birth deformities associated with congenital rubella syndrome for instance, are still traceable ( to some extent) to the cell lines obtained decades ago, from a single fetus:

At the height of a rubella epidemic that began in Europe and spread to the United States in the mid-1960s, [researcher Stanley]Plotkin calculated that 1% of all births at Philadelphia General Hospital were affected by congenital rubella syndrome. In some cases, women who were infected with rubella while pregnant terminated their pregnancies due to the serious risks from CRS. Following one such abortion, the fetus was sent to Plotkin at the laboratory he had devoted to rubella research. Testing the kidney of the fetus, Plotkin found and isolated the rubella virus. Separately, Leonard Hayflick (also working at the Wistar Institute at that time) developed a cell strain called WI-38 using lung cells from an aborted fetus. Hayflick found that many viruses, including rubella, grew well in the WI-38, and he showed that it proved to be free of contaminants and safe to use for human vaccines…The rubella vaccine developed with WI-38 is still used throughout much of the world today as part of the combined MMR (measles, mumps, and rubella) vaccine.

To be clear : the Pfizer vaccine does not contain actual cells from an aborted fetus. The original cell lines from long ago were manipulated substantially in the laboratory and have been developed into new cells.

Footnote Two: For the interested, the vaccine concerns of the US Catholic Bishops were usefully laid to rest in this article a few days ago in the Philadelphia Inquirer newspaper. Conservative commentators in the US media have also debated the abortion-based moral objections to vaccines both here and at greater length here. As the columnist Ramesh Ponnuru concluded in his article for the conservative National Review :

Neither the Pfizer nor the Moderna vaccine used cells taken from aborted human beings for their development or production. Both were, however, tested using cells that may have been derived from an abortion in 1973.The connection between that possible abortion and the vaccines is attenuated. No one who takes [ the Pfizer vaccine] to protect himself and his community from COVID need worry that he is either causing an abortion, encouraging abortion in the future, or conferring approval of it.

Good to know. For his part, Pope Francis has been a strong advocate for the Covid vaccination programme, worldwide.

So once again – as we were back in 1997 – we are being confronted with the reality of the ghastly family that provides us with our head of state. As they did with Diana, the Windsor Firm has blown a golden chance to humanise and modernise their gothic institution. No wonder Prince Harry and Meghan Markle chose not to allow the same forces that destroyed Harry’s mother to treat them as fair game Last week’s attempt by the Firm to smear Markle for the alleged bullying of her staff was typically clumsy. Terrorising staff is something that Prince Charles has made into an art form down the years – in everything from the rituals required for making him a cup of tea, to the preparing of his bath and folding of his towel to his foot-stamping demands (in the past) that his staff had to lie about his whereabouts to his then-wife, in order to conceal his infidelities.

And yet…. the Palace has immediately said it will ‘investigate” the allegations against the Duchess of Sussex, even though it still can’t bring itself to “investigate” the compelling evidence of Prince Andrew’s active association with a convicted pederast, including his ongoing refusal to talk to the FBI about it.

Ultimately… The main target audience for the Oprah interview was probably American, not British. It is in the US that the accusations of racism will cut the deepest. As for us…PM Jacinda Ardern was right to observe a few days ago that New Zealand is not about to become a republic. Yet once the reign of Queen Elizabeth II is over, that mood could change very quickly. Dynastic rule will pass on to a Charles whom we know all too well – and then to a William who seems to have gone from youth straight into advanced middle age without picking up a personality along the way. Faced with the prospect of this pair for the next half century, New Zealand might well be open to considering the republican alternative.

Malice From the Palace

When it comes to royal titles being a shield for your loved ones against the malice from the Palace …Prince Harry’s new theme song could well be Gene Chandler’s great hit from 1962 :
As I walk through this world
Nothing can stop the Duke of Earl
And-a you, you are my girl
And no one can hurt you, oh no….
And when I hold you
You’ll be my Duchess, Duchess of Earl
We’ll walk through my dukedom
And a paradise we will share….