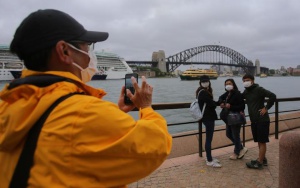 It isn’t only on the cricket field that Australia performs better. The clarity and degree of detail in Australia’s published schedule of the priorities for its vaccine rollout has been very impressive. Here for instance, is their initial “1a” top priority category:

Quarantine and border workers, including:
• staff at entry points to the country (such as sea ports and land borders)
• staff working in quarantine facilities, including those employed under Commonwealth, state or private agreements, and
• Commonwealth employees (including Defence personnel) who are identified as having the potential to encounter returning travellers as part of their work.
Frontline health care worker sub-groups for prioritisation
• frontline staff in facilities or services such as hospital emergency departments,COVID-19 and respiratory wards, Intensive Care Units and High-dependency Units
• laboratory staff handling potentially infectious material
• ambulance and paramedics service
• GP respiratory clinics
• COVID-19 testing facilities
*All other healthcare workers are included in Phase 1b, including medical and tertiary students with placements in these healthcare settings.
Aged care and disability care staff
• nursing and personal care staff
• allied health professionals who routinely provide care
• kitchen, cleaning, laundry, garden and office staff
Aged care and disability care residents

All of the above is estimated to require 1.4 million vaccine doses. Only then do we get into the “1b”category :
Elderly adults aged 80 years and over
Elderly adults aged 70-79 years
Other health care workers
Aboriginal and Torres Strait Islander people > 55

The four phases of the Australian rollout are available here. The figures include estimates of number of doses required in each of the four stages, and much of the relevant information has been mapped. There is also an interactive “checker” available here, which enables the public to work out which stage of vaccine delivery they’re likely to fall into.
In the meantime, Australians can also download a backgrounder on what they can do to ready themselves (eg by keeping safe, and by getting the necessary medical documents in order,) so that the vaccine rollout can proceed as smoothly as possible, once it commences.

Compare and contrast all of that sharp, clear advice with a New Zealand situation that Covid Minister Chris Hipkins has described as a “ rolling maul ” Apparently, it will unfold if, when and as the planes carrying the vaccines touch the ground. Sure, its true that you can’t vaccinate anybody if you don’t have the vaccines. But that doesn’t preclude planning and publicising the sequence of what will happen after the planes arrive. Evidence of planning is particularly necessary given the reportedly high level of anti-vaxx sentiment out there in the NZ community. While the intensity level varies – some currently anxious people may be persuadable – it would help if the government looked like it knew what it is doing, and wasn’t just making things up as it went along. Publishing a similar priority schedule to the Aussies would inspire confidence, even if subsequent vaccine delivery hiccups do end up causing a few delays. Even then, the overall priority rankings shouldn’t be affected.

What won’t help the cause of coherent planning is the fragmented DHB system of health delivery that exists in New Zealand. The Covid planners in the DPMC will have to work around that liability, bequeathed to us by the market zealots who thought that having 19 different and competing health bodies in this small country would boost efficiency. Still, Australia has managed to devise a vaccine rollout schedule that transcends state/territory borders, so clearly the tasks of co-ordination are not impossible. But a rolling maul? Lets hope that isn’t an accurate description of the planning to date.

Footnote One: Interestingly, the Australians haven’t tried to distinguish between pre-existing health conditions. Heart problems, respiratory ailments and diabetes will all apparently be treated as equal grounds for inclusion in the 1b category. Notably though, the Australians have acknowledged the role of ethnicity in health status and life expectancy. Indigenous Aboriginal and Torres Islanders qualify in the1b category at age 55, far earlier than the qualification age for European/Asian and other populations.

Footnote Two: A case is being made here for treating south Auckland as a number one priority for vaccination once border /managed isolation staff have received the vaccine. \\The government response has been that the region would become a top priority only when the mass vaccination stage of the programme begins in the second half of 2021. Logically, all of south Auckland should go up the priority list only in the context of a prevention strategy based on how best to continue to keep the virus out of the country. Instead, we – and Australia – have adopted a protection programme, based on progressively inoculating those whose lives and wellbeing are deemed to be under the most serious threat from the virus. Basically, we have had the luxury of adopting a protection strategy because the virus hasn’t (yet) embedded itself here.

However, if we proceeded to (right now )vaccinate everyone in south Auckland because we’d concluded that its workforce, low income levels, crowded housing and ethnic composition were variables that make the entire population vulnerable to the virus, the parhn forward wouldn’t be simple. We would have to (a) how to define the region and the size of the population it contained that had to be vaccinated (b) whether enough vaccine doses were on hand to administer the two doses required to that many people and (c) whether the super ‘cold chain’ Pfizer vaccine that we do currently have on hand is a practical tool for a mass vaccination programme.

One of the reasons for adopting a ‘protection’ strategy (ie. to inoculate the most vulnerable in stages and only then proceed to the general population) was because there was an underlying assumption that community transmission would eventually occur here. Arguably, we have therefore needed to vaccinate the most vulnerable for that likelihood in order (a) to minimise the deadly impact and (b) to prevent the health system from being overwhelmed. Even now, we are still only one outbreak away from the kind of runaway transmission that occurred last year in Victoria, and elsewhere.

That’s why the authorities have concluded that we should use the advantage we now enjoy, in order to protect the most vulnerable first. That includes the Covid frontline workers in south Auckland… But true, it does not include all of the low income, poorly housed, service sector workers who live in that region. Australia is proceeding along the same lines as we are, and is postponing the blanketing of entire suburbs and ethnic populations with automatic access to vaccination. That time will come though, but only later in the year.