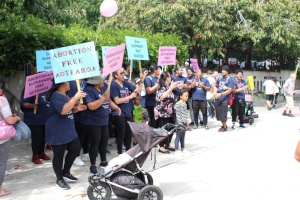 Yesterday, the abortion law reform organisation ALRANZ celebrated 50 years of existence since its founding AGM in 1971 – and in marking the anniversary, former president Dame Margaret Sparrow noted how much had changed “and how long it took to change it.” Too right. For decades, abortion was regarded as an offence conditionally administered under the Crimes Act, until a law change last year saw it take its rightful place as a medical procedure conditionally available to women under the Health Act.

On abortion law, New Zealand has consistently lagged behind Australia, a country that’s normally seen as being far more conservative on social issues. The state of Victoria for instance de-criminalised abortion back in 2008 and – with the exception of South Australia, which made the same law change only a few weeks ago – the rest of Australia has been well ahead of us in passing laws that define abortion as a medical procedure and embrace the implications of doing so. For example: Australian law has had no difficulty in creating 150 metre “ safe access zones” around abortion clinics to protect (a) the women seeking abortions and (b) the health workers providing the service, from the abuse and the preaching efforts of anti-abortion protesters. New Zealand has yet to offer women the same protections. Labour MP Louisa Wall has introduced a bill to (belatedly) fix this loophole.

Wall’s bill would not have been necessary if Act Parry David Seymour had not carried out a clever clogs manoeuvre in the House last year that effectively gutted the safe zone provisions meant to be a key part of the reforms of the 1977 abortion laws. Thanks to Seymour, the House is now being put through the time wasting expense of passing Wall’s separate bill and thereby finally giving substance to the provision contained in the original reform package. But hey, don’t expect the Taxpayers Union to be consistent and condemn Seymour’s gambit, and the subsequent waste of taxpayer money. That won’t happen.

The free speech smokescreen
Interestingly, a series of Aussie state legislatures and Australia’s highest court have consistently rejected the argument that creating safe access zones around abortion clinics would set a dangerous precedent for freedom of expression. The Australian High Court proceedings are available here.

The Solicitor-General for Victoria submitted that the activities of protesters had previously created an environment of “conflict, fear and intimidation” outside abortion clinics, and that these activities were harmful to both patients and staff in a number of ways. .. In particular, it was said that existing laws did not adequately protect women and staff against the effects of these activities.
To repeat: what is clear from the state submissions and from the Australian High Court judgement itself, is that the key point at issue with the safe access zones was not the right to political speech and protest – rather, it was whether the protection of the dignity of the women and the staff being targeted was consistent with the stated principles of the public health system. As the Victorian Solicitor- General submitted :

Generally speaking, the High Court noted, to force a political message upon another person is inconsistent with the human dignity of that person. While there is an interest to be protected in fostering free expression and political comment by members of the community, the Court argued that this is not to be interpreted as putting an obligation on anyone else in the community to receive such messages. Moreover, the Court ruled, a safe access zone does not unfairly and unequally put at a disadvantage the views of the anti-abortion movement. In terms of content, the Court pointed out, the safe zone is completely viewpoint neutral. No views about abortion (pro or con) can be expressed within them.

Nor, in context, was this a case where freedom of expression was being curtailed merely to spare “hurt feelings” or “discomfort”.

The tendentious suggestion that the communication prohibition might be engaged by conduct apt to cause no more than “discomfort” or “hurt feelings” calls to mind suggestions to the effect that political speech cannot be truly free if it can be silenced for no reason other than to spare the feelings of those spoken about. Suggestions to that effect may have some attraction in the context of public conflict between commercial or industrial rivals or in the context of a political debate between participants who choose to enter public controversy. But they have no attraction in a context in which persons attending to a private health issue, while in a vulnerable state by reason of that issue, are subjected to behaviour apt to cause them to eschew the medical advice and assistance that they would otherwise be disposed to seek and obtain.

In New Zealand, those same rights to dignity have been enshrined in the Medical Council Code of Rights. Arguably then, abortion clinic safe access zones are a necessary protection for what the abortion law reforms have defined to be a medical procedure. In other words, the failure to create safe access zones around abortion facilities creates a disturbing gap in the medical ethics dimension of our public health system.

Yet unfortunately, that’s currently where we’re at. Until Wall’s bill becomes law, New Zealand women will still have to run the gauntlet of the same aggressive bigotry from which their sisters in Australia have been shielded by law. Women here have Seymour to thank for keeping them in this hazardous and distressing situation, and on specious “ free speech” grounds. There’s quite a contradiction here. This is the same politician who assured the public that his euthanasia legislation would contain protections to ensure that anyone wanting to avail themselves of that particular medical procedure would not have their difficult personal decision subjected to external pressure. So why does Seymour think it is dangerous to provide the same protections to women seeking an abortion?

Open Source Security
Very disappointing last week to see Police Commissioner Andrew Coster trying to paint the Police as the victims of a double standard On the one hand, Coster argued in his NZ Herald op ed, the public don’t want young brown people being approached and photographed in public places – but at the very same time, people do want the Police to monitor white extremists online. Frankly, Coster may be the only person in New Zealand able to see those two things as a double standard. Approaching a group of young people – to see if they knew anything say, about a burglary in the neighbourhood – doesn’t then justify photographing them for inclusion in a Police data bank. That looks more like racial (and age) stereotyping.

For some time, the SIS has inspired similar concerns about stereotyping. Among other things, the second anniversary of the Christchurch mosque shootings has been a reminder of how the misguided security service focus on Islamic terrorism helped the shooter to carry out his plans, undetected. Yet in recent weeks, criminal charges have been laid in relation to postings on the 4chan website about threatened bomb attacks on both Christchurch mosques.

When the media inquired as to why this information was detected and reported by a member of the public rather than by the intelligence services meant to be monitoring websites like 4chan, Canterbury district commander Superintendent John Price reportedly said: “Whether it comes from the public or the intelligence sources, what’s important is that we take these things seriously.” Well, no. Surely it does matter that once again the SIS has dropped the ball.

A culture change seems necessary. Both the Police and the SIS have long regarded transparency as posing a threat to their operations, rather than it being a key part of them doing the job properly. It seems a difficult concept for them to take on board. For decades, they’ve operated on the basis that they should reveal as little as possible about their operational practices and priorities. In the past, secret information was seen to be the very best information. The public was kept in the dark, for what was thought to be their own good. Trust the authorities. They’re doing important stuff, and know what they’re doing etc.

That’s just not how it is anymore. The Police and SIS face a new threat environment. Practices that previously had a mystique – the secret tip-offs, the covert surveillance, and the intelligence gossip from 5 Eyes partners – are now likely to be a hindrance, rather than a help. Many security risks are out there in plain sight, on the likes of 4chan. If they’re cyber security threats, many of the major miscreants are located offshore. Yet as the Royal Commission reported, the SIS seriously lacks expertise in detecting and managing online threats.

That’s a problem, right. How can deeply tribal organisations like the Police and SIS be trained to operate in an open source world? Taking photographs and amassing image banks of young people – and especially of rangatahi – in public places may (technically) be legal. Yet you’d think the Police would have realised the downside, and that treating an entire generation as the potential enemy is not a good “hearts and minds’ strategy.

Instead, the Police need to be transparent about their facial recognition policy, and about what privacy safeguards ( if any) exist within it. The SIS needs to recruit people with the tech ability – and more importantly with the sensibility – necessary to navigate around the modern Internet, such that they know what they’re at. They also need to reveal which countries are generating the cyber attacks being launched against us, even if those countries also happen to be our trading partners. Basically….in a climate of suspicion, an open source approach is the only sustainable way for the Police and SIS to go.

Chance the Rapper
Now 28, Chance has deep roots in Chicago social activism. His dad worked for black Chicago mayor Harold Washington and for then-senator Barack Obama. It is easy to forget that social grounding, given the playful psychedelic free associations in some of his releases since the breakthrough Acid Rap mixtape in 2013. He’s always been worth checking out, though. 2019’s “We Go High” track played beautifully on both meanings of Michelle Obama’s famous exhortation. On this new “The Heart and the Tongue” single he goes all the way back to the ancient Greeks (to Thales of Miletus no less) to find a genuine resting place from the forces fostering division and false unities, right inside his own head…Good video too, which he also directed.