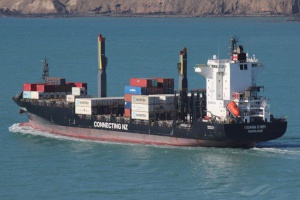 The enduring damage done by the economic reforms of the 1980/1990s is still playing out in the communities that lost thousands of well-paid full time jobs, and with a subsequent influx of drugs, domestic violence and mental health problems. A far less visible victim of the market mania for de-regulation has been coastal shipping. As Maritime Union national secretary Craig Harrison recently pointed out:

We had 34 New Zealand flagged ships in 1994. Today we have just one Kiwi flagged container ship. That’s an incredible loss. We used to protect our coastal shipping by requiring domestic freight to be shipped only by New Zealand registered vessels operating under New Zealand law. We did this because we recognised shipping was vital to our economic interests. When that protection was removed in the deregulation of the 1990’s, the fleet dwindled in the face of international companies, running crews who weren’t protected by New Zealand’s minimum employment standards.

In stark contrast, the home of free market capitalism has always forbidden that sort of thing. Under the Jones Act, the US still requires goods shipped between U.S. ports to be transported on ships that are built, owned, and operated by US citizens or permanent residents. We are still paying the price for doing the opposite. Essentially, we have made ourselves captive to the priorities of large international shipping lines that dump incoming freight at the likes of the Port of Auckland (POAL) or Tauranga, fuelling port congestion and freight delays. Most of this cargo is reliant on trucks and ( belatedly) on rail. Export goods originating in all parts of the country face the same problems in reverse.

What Harrison has been calling for is more of a hub and spoke operation where coastal ships that are more attuned to the delivery needs of our relatively small scale import/export trade are deployed to shift containers to and fro from hubs like Tauranga, POAL and Lyttleton to regional spokes like Nelson, Timaru, Napier, Bluff, New Plymouth etc. It just isn’t worth the while of international container shipping to service the regional NZ trade.

Obviously, we wouldn’t have to build or to buy this new domestic fleet. The ships would be available for charter. These smaller, domestically flagged and crewed ships could then respond flexibly to market demand, while reducing congestion and creating full time jobs both on the water and in provincial ports. These jobs would help offset any job losses in trucking. Talking of which…since fewer trucks would be on our roads, there would be less of the current costly damage to our roading network, and fewer truck-related traffic accidents. Overall, it could only be a win/win outcome if ships and rail could be made to function in unison to carry a good deal more of this country’s imports, exports and perishable goods to and fro from the major port hubs.

The promotion of coastal shipping is not merely consistent with the belated revival (by Labour and New Zealand First) of the provincial rail network, but is an essential adjunct to it. There would be environmental gains as well. This week, the Climate Change Commission draft report signalled the need for New Zealand to de-carbonise the transport sector. Much of the subsequent debate has been about the transition to electric passenger vehicles, and the gradual phasing out of private cars reliant on fossil fuels. Yet our dependency on trucking is an area where gains can be made, and without waiting for Elon Musk and his rivals to come up with viable self-driving and battery operated trucks.

The reality is that – right now- more of our freight could be being moved by rail and coastal shipping networks less prone to emissions, and open to further advances from electrification. As mentioned, there would be immediate emissions reduction gains by reducing the number of trucks pounding up and down the roading system. Further ahead, the technology for battery-powered and/or hydrogen powered container ships is already well under way. This advance won’t arrive overnight, for reasons pointed out in this Wired magazine article. Yet with a recent 8 million euro injection funds from the European Union, delivery of

The good ship Topeka will run on a 1,000-kilowatt-hour battery and a specialised hydrogen fuel cell, which means the vessel would emit no greenhouse gas emissions from the moment it launches, currently scheduled for 2024…the Topeka will be our first step towards scalable LH2 [liquid green hydrogen] fuelled maritime operations. We shall create a full LH2 infrastructure and commercial ecosystem, while at the same time removing yearly some 25,000 trucks from the roads,” Per Brinchmann, vice-president of special projects at Wilhelmsen, the project’s coordinators, said in a statement.

Basically, if we can put the chartering infrastructure for coastal shipping in place, we would then be well positioned when the de-carbonised shipping fleets begin to arrive in five or ten years time, which is roughly the “put up or pay up” time for New Zealand to meet its Paris climate change commitments.

Point being : a coastal shipping revival would not be a nostalgia trip likely to re-empower the wharfies for a replay of the 1951 lockout. Instead, it would be a forward-facing policy consistent with the pressing needs to (a) de-carbonise the transport sector (b) work in harmony with rail and (c) prepare this small trading nation for the trading environment of the future, in which we will be constantly needing to re-assure our customers in foreign markets that New Zealand is doing all it can to reduce its global carbon footprint. Arguably then, each of the three emission reduction budgets cited in the Climate Change Commission report should set out the progress being made on turning the coastal shipping revival into a reality, with line items citing the funds being allocated to make it happen.

Finally… There are a few other potential advantages from a sizeable government investment in this sector. As we saw in the aftermath of the 2016 Kaikoura earthquake, the transport links to and from New Zealand’s population centres can be extremely vulnerable to natural disasters. In the wake of a major earthquake Wellington – for instance – could well be cut off for months. Almost inevitably, a major quake would do damage (a) to the city’s fragile water supply lines, some of which run adjacent to fault lines along the Hutt Road. and (b) to the rail network and (c) to the grand total of two roads (ie up Ngauranga Gorge and to the Hutt Valley) that link the capital city to the rest of the North Island. After a quake, Wellington could well become entirely dependent on coastal shipping. If only it existed, in a meaningful way.

Footnote: At present, “New Zealand’s leading dedicated coastal ship operator and sustainable domestic cargo carrier”is the Pacifica Shipping Line, which ferries freight to and from our regional ports via the MV Moana Chief. Ironically though, Pacifica was bought in 2014 by the China Navigation Company, which is the deep sea ship owning and operating arm of the multi-national Swire Group, a Hong Kong and London based conglomerate started by John Swire in Liverpool in 1816.

The Swire Group has been active in China since 1866, where it is better known as Taikoo. Since 1948, Swire has owned the Cathay Pacific airline among a raft of other enterprises, from hotels and office buildings on several continents to fleets of container ships and tankers to sugar factories etc. China Navigation itself was founded by John Swire’s son in 1872, initially to ferry freight up the Yangtze River. Little of this history is on Pacifica’s website, but the website is still worth checking out.

Last week’s pandemic research report by the ultra-conservative Lowy Institute in Australia deserved more media attention here than it got. On the basis of six measures of the global response to the pandemic, we were rated number one in the world for our Covid efforts, while Australia came in eighth. So much for those persistent claims by the National Party that Australia has managed the pandemic better than we have. Given that the ultra conservatives at the Lowy Institute have disagreed so sharply on this point and with figures to back it up, the centre-right complainers here should just pack it in.

Cassandra Jenkins is a mid 30s American artist/musician, and a friend and contemporary of Emmylou Harris and Eleanor Friedberger. The title of her new album is a reference to a Met retrospective called Phenomenal Nature by the textile artist/sculptor Mrinalini Muhkerjee. In fact, the “Hard Drive” track begins with a voice memo that Jenkins recorded after chatting with a security guard at the Met exhibition.

Inevitably the mix of spoken word and speak/singing on “Hard Drive” will remind some people of Laurie Anderson, but the tone is different, and lacking in irony. Basically, Jenkins uses all the various meanings of “ Hard Drive” as a meditative peg for her own hard won sense of balance and purpose, to the point where even the music that envelops her thoughts starts to seem like just another external sheathing and distraction. It has been a hard drive and she’s not there yet, but count it down with her: one, two, three…