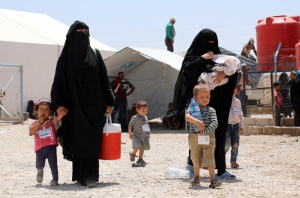 Not for the first time, New Zealand’s leaders did us proud yesterday while – faced with the same moral challenge- Australia leaders fouled their nest. The case of 26-year-old Suhayra Aden and her two surviving pre-school children is clear cut. If Western democracies truly believe in a world governed by international law, they need to shoulder the political risks and responsibilities involved in maintaining those norms. Yet for the past 20 years, Australia has done the exact opposite. Whenever there are redneck votes to be won by pandering to toxic “Australia First” sentiments, there will always be political operatives like Scott Morrison and Peter Dutton who evidently have no qualms about unloading Australia’s responsibilities onto other countries.

Enough already. Aden lived in Australia from the age of six, and travelled to Syria when she was 19. She had three children there, fathered by two Swedish men who had joined Islamic State. Both men and one of her children died in Syria. There is no evidence that Aden has committed violent criminal acts. True, she has been described by Turkey as a “terrorist” but

as the Australian Broadcasting Corporation has reported:

The Turkish government has in the past labelled as terrorists people who merely lived under Islamic State and did not participate in fighting or actual acts of terrorism.

There is no evidence this woman personally participates in acts of terrorism. The Interpol “Blue Note” under which Aden was held concedes as much. The colour coded Interpol system –

available here – describes “Blue Notes” as signifying Aden was to be treated as a person of interest “in order to collect additional information about a person’s identity, location or activities in relation to a crime.” Meaning : she was classified by Interpol as being a potential source of information about terrorism. This category is opposed to “Red Notes” which involve people wanted for crimes, or “ Green Notes” where such a person “is considered to be a possible threat to public safety.”

To repeat: Aden was being sought not for committing terrorist acts, but because she can provide useful evidence about her own activities, and, potentially, about the actions of others. If brought back to New Zealand, Aden would presumably – as an Islamic State supporter – face charges here under our Terrorism Suppression Act.

Frankly, New Zealand is tired of being patronised, and of having its views treated with contempt. Especially by a country that has consistently chosen to pander to the worst racist and xenophobic views held at home, instead of facing up to its international obligations. For the past 25 years, Australia has spectacularly failed to abide by the commitments it made as a signatory to the UN Refugee Convention. Before and since the 9/11 attacks, conservative Australian politicians have demonised asylum seekers as potential terrorists, while simultaneously wedging their Labour Party opponents as being “soft on terrorism.” In the early 2000s, New Zealand came to the rescue and gave a home to roughly 150 of the 433 Tampa boat people denied entry to Australia. In the case of this Tampa refugee at least, the story had a particularly happy ending.

Since then, we have offered to take more of Australia’s refugees. Rather than lose face, Australia has preferred to let those refugees and their children rot in detention, indefinitely. Meanwhile, Australia has continued to export its problems. Brenton Tarrant, the Australian white supremacist came over here and committed the biggest mass murder in New Zealand history. Moreover… Australia happens to be a country whose founding mythology has been based on its readiness to offer 18th and 19th century convicts a second chance to prove their worth. Of late though, it has been deporting people after they’ve served their sentences and paid their debt to society.

This policy has uprooted people and innocent families, regardless of the fact that some of them have lived in Australia from childhood, paid their taxes there, and raised their children there. Families have been kicked out to countries where they have no ties or support networks of family and friends. Again, New Zealand has provided a home to many of the victims of this despicable policy. Our protests about it have been ignored.

In sum, the current case in Turkey is merely the latest example of Australia ducking its obligations as a good international citizen,. Apparently, New Zealand PM Jacinda Arden and Australian PM Scott Morrison had spoken a couple of years ago about what would happen if and when Aden re-surfaced. Arden’s anger yesterday – and her accusations that Morrison has acted in bad faith – speaks for itself. Ardern has been presented with a fait accompli. Morrison has hidden behind Australia’s readiness to pass laws that enable it to wash its hands of the likes of Aden and her children.

Given that the interests of pre-school children need to be treated as paramount, it is hard to see how separating them from their mother could possibly be in their best interests. Not to mention the fact that Aden’s wider family is still resident in Australia, and their mother has yet to be tried, let alone convicted of committing terrorist acts. She made some terrible decisions in her late teens. Yet if Australia had its way – and if New Zealand wasn’t there to pick up the pieces – Aden and her children would have been made stateless. Need it be mentioned that rendering your citizens stateless is also a violation of international law?

Footnote One. Ardern’s reasoned and articulate outrage– however unpopular the underlying principles may be to the redneck audience here at home – should be a source of pride to all New Zealanders. To no-one’s surprise though, National Party leader Judith Collins has tried to make political capital out of the situation. Basically, National has given lip service to the needs of the children while simultaneously advocating that we should follow Australia’s example and strip their mother of her citizenship, regardless of the impact on the children this would have, and regardless of those UN conventions aimed at reducing the world’s population of stateless people who – literally – have nowhere to go.

Footnote Two: The Aden case has given fresh relevance to the case of Mark Taylor, the New Zealand jihadist who is – presumably – still being held in Syria in a jail run by Kurdish forces. To all outward appearances, New Zealand has washed its hands of Taylor. Thankfully though, it should be far easier to assist Suhayra Aden and her children in Turkey, given that we have an ambassador based in that country. Also, Turkey has expressed a readiness in some other such cases in putting foreign nationals who supported Islamic State onto planes back home. Neither of these important conditions exist in the far more dangerous and still contested regions of Syria where Taylor has been held.

Unfortunately, the steps to resolve Taylor’s situation have s been complicated by the reluctance of the international community to deal directly with the Kurds inside Syria about the fate of their foreign nationals. Such interactions would convey on the Syrian Kurds an international diplomatic status that would enrage Turkey and other neighbouring countries who continue to strongly resist the claims to independence of the Kurdish communities in their midst. All such contact has to be undertaken below the radar, if at all. Ultimately, we will only know if any efforts have been undertaken to secure Taylor’s release if and when they succeed.