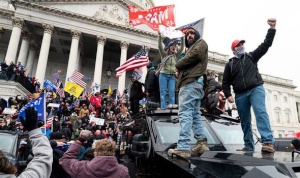 Hong Kong and Washington DC. On the same morning, the tyrants in power in Beijing and their counterpart in the White House have shown how they refuse to accept the legitimacy of any different points of view, and the prospect of losing power.

The scenes at the Capitol building have been unbelievable. After days of warning that the protesters were massing and likely to be violent, and with President Donald Trump urging them on…and given the precedents that right wing protesters had stormed state legislatures elsewhere in the country…why wasn’t a perimeter put around the Capitol, and equipped with sufficient power to maintain it?

The difference between the Capitol Police/National Guard response to the “Black Lives Matter” protests and the handling of right wing nationalist protests continues to be striking. Repeatedly, gun toting nationalist groups had been allowed to storm and disrupt state legislatures with impunity, in the likes of Michigan and Idaho. The FBI even foiled a plot to kidnap the governor of Michigan by nationalists opposed to the precautionary wearing of masks. In stark contrast, massed ranks of Police and National Guardsmen have blocked street access by Black Lives Matter protesters, and fired tear gas canister, rubber bullets and stun grenades into their midst.

You have to ask – how was it possible for the authorities to use more violence to dispel a peaceful crowd gathered outside that church in Washington DC in August (to enable Trump’s photo op) than they used to defend the Capitol building when it was engaged in the process of certifying the nation’s election results? Today’s protest will pass. Yet clearly, the intolerance and social division that has been stoked for personal gain by Trump’s poisonous presidency will endure. And there will always be idiots like Kevin Sorbo around on Twitter to stoke the fires.

Research by Arizona criminology professor Ed Maguire (cited on the 538 website) suggests that in line with the double standards shown by the Police and National Guard, left wing and right wing protesters encounter different tactics during the Police response to their protests. With good reason, left-wing protesters commonly believe that Police are against them and will rough them up more than they will other kinds of protesters. By contrast, right-wing protesters believe that police are solidly on their side.

Maguire pointed to the Black Lives Matter protests in Portland, Oregon last summer, where right-wing protesters brought bear mace and other weapons to a protest and used them on both left-wing counter protesters and members of the press. Even as that happened….Portland police chose to take a hands-off approach, something that ended up only increasing the left-wing protesters’ sense of grievance against the police.

In that respect, US police nationwide seem to have internalised the same views ; ie. that left wing protests need to be met with force, while right wing protests are best handled with tolerance, and by stepping aside until they finally run out of steam. In an interview with right wing Stop the Steal protesters in Arizona, Maguire told 538’s
Maggie Koerth about how surprised he’s been by how strong – and by how religious – their belief in Police support had been.

“They believed God was on their side and police were backing them…. leftists are godless and they hate God and hate America. [But right-wing protesters] were God fearing moral people and police would always back them for that reason.”

Will today’s events in Washington where – belatedly – the Police have acted against Trumpist protesters change that perception? Probably not. Most of the god-fearing types went home early from the protest, once the rally had concluded. Trump’s subsequent message of love and appreciation to the hard core who stayed on to storm the Capitol sounded more like a tactical retreat than a condemnation. In all likelihood, the hard core will be back again on inauguration day, January 20.

All of this has somewhat overshadowed the Democrats’ twin victories in the Georgia Senate races, where the outcomes effectively hand control of the US Senate to the Democratic Party. For the next two years at least, the Democrats will control three arms of the US federal government. ( The House, the Senate, and the Presidency.) Thankfully, both Raphael Warnock and Jon Ossoff won by margins large enough to avoid the .5 threshold within which Georgia law allows for recounts.
What made these victories possible? Easy: it was black turnout. Everything about these two contests was exceptional including the estimated $800 million spent on them over past two months. Incredibly, the estimated 4.4 million voter turnout for these two by-elections exceeded (by the order of hundreds of thousands), the voter turnout at the November 3 general election.

At the heart of this effort was the phenomenal increase in turnout by black voters – who among their other achievements elected the first black senator ( Warnock) in the state’s history. This was overdue. Black voters reportedly comprise 30% of Georgia’s electorate, but only 12% nationwide. On page 19 of this link, there’s a fascinating table showing the differing ethnic composition in the support for the Democratic Party and the Republican Party in Georgia, which- when projected out to 2036, indicates a steady decline in the white vote on which the Republicans currently depend. White nationalism looks like being a dead end street for the Republicans, in more ways than one.
The turnout and the eventual results defied the attempts at right wing obstruction. Last night, the Atlanta Journal-Constitution newspaper reported this:

”In Fulton County, election officials reported that cars blocked poll workers from returning absentee ballots that had been picked up from drop boxes, Georgia’s state election manager Gabriel] Sterling said. The ballots arrived, but they were delayed.
More than anything, the result in Georgia will boost the status and national profile of Stacey Abrams, the architect of Georgia’s Democratic registration and organising drive. In a couple of years time, Abrams will be a likely contender once again for governor of Georgia. Both the successful Senate candidates that she endorsed have strong ties to the black community and to its political machinery. Warnock is pastor of the same church that Martin Luther King and his father called home, and the 33 year Ossoff has worked for local black politicians, and for local health and welfare community causes.
Crucially, Abrams had stressed that victory in Georgia would require the Democrats to expand their organisational efforts within – but also beyond – the metro areas of Atlanta, Savannah, Augusta and Macon that had long been the party strongholds – and head out into red-leaning countries across the state. She succeeded, wildly. In the end, Ossoff and Warnock managed to outperform what Biden has achieved in November in the likes of red-leaning counties like Paulding, Carroll, and Bartow, among others.

Last night, Nathaniel Rakich also had examples of how the organisational effort across several elections ( helped by demographic changes favouring Democrats) had succeeded in the counties and suburban areas around the mega-metro c0mplex of Atlanta :
Want to see what a re-alignment looks like? Cobb County (94 percent of the expected vote reporting) and Gwinnett County (98 percent reporting) — both in the Atlanta suburbs — voted for Mitt Romney by 12 points and 9 points .
respectively. Tonight, they are voting for Warnock by 16 points and 21 points, respectively.

What will it eventually mean? For starters, winning the Senate will mean that the Democrats will no longer be beholden to the outgoing Senate majority leader Mitch McConnell, who has (arguably) been the most powerful politician in America over the past six years. In itself, it won’t make radical change possible. Some major legislative changes would require a 60% majority in the Senate. The Republicans will probably still be able to filibuster and stall legislation and some appointments that they don’t like.

Moreover, it was already being argued last night on social media that the Georgia outcome really empowers the Democrats own most conservative senator, Joe Manchin of Virginia, whose vote will now be necessary for any laws that come down the pike.

My House has many Manchins

True enough. But Manchin and other conservative Democrats would never have voted for the Green New Deal, anyway. If there is a silver lining to this situation, it is that Manchin will probably form a cross-party bloc of “moderates” – including Republicans like Mitt Romney and Susan Collins, as well as liaising with fellow conservative Democrats like Kyrsten Sinema and Mark Kelly. Normally such a bloc would be seen as an impediment to radical change, which it certainly will be. Yet in the current toxic environment in Washington, any mechanism that allows for cross party c0-operation and the rebuilding of the Republican Party along more moderate lines post-Trump, should probably be welcomed.

None of this is meant to downplay the significance of having a Senate majority. In areas like health, welfare, Supreme Court appointments and when it comes to other key federal positions, the Democrats can now pursue their own moderately liberal agenda. By necessity, Biden’s presidency will be focussed for the next two years on the pandemic. In the 2022 midterms, his administration will be judged almost exclusively on its success or failure on ending the pandemic, creating jobs and getting society back to something akin to normal. Everything else will be peripheral to the Covid-19 challenge. Winning the Georgia runoffs (and thus, the Senate)means that Biden’s efforts against the virus will not be hobbled from the outset by the Republican Party.

As for the Republican Party…It has been happy to serve as the vehicle for the cult of Trump, and it is now reaping the harvest of Trump’s corruption and false narratives. Ironically, Trump’s strident rhetoric about stolen elections may have deterred enough of his supporters from voting – why bother, if it’s a fraud?- as to ensure the Republican defeats. In November, quite a large number of voters had split the ticket between voting for Joe Biden as president, while voting for David Perdue as senator. It kept Perdue in the frame for yesterday’s run-off.

This time though, Perdue suffered by being linked to Kelly (“I’m more conservative than Attila the Hun”) Loeffler. Any way that you look at it, Trumpism had a really bad night in Georgia. Thanks to the Washington riot though, it is the Republican Party that now has the hangover. After all that, some soothing music is probably called for. Here’s Nashville guitarist William Tyler with his rendition of a very well-known tune: