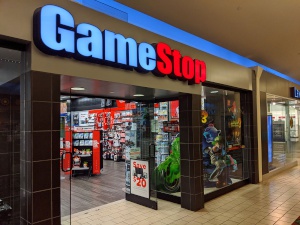 For over a decade, the stock market in the US (and everywhere else) has been utterly detached from the lives and the wellbeing of ordinary people. During 2020 for instance, as the Covid economic recession raged and jobs were lost a rates unseen since the Great Depression, the Wall Street speculators treated it as just another day at the races. While Middle America burned, the tycoon sector partied on regardless.

Well, a day of reckoning has now arrived in the unlikely shape of GameStop, hitherto a fading video store chain. In recent weeks this stock has surged in value from $18 to an incredible $280 a share, causing an immense amount of grief for hedge funds that had been going about their usual business of rigging the game to ensure the stock declined in value, to their benefit. Within the space of a couple of weeks, cosy expectations of major profits have tuned into terrified experiences of huge losses…. Basically, a merry band of small investors working collectively on the social media platform Reddit have mobilised with the express purpose of giving the giant Wall Street hedge funds a taste of their own medicine.

They have succeeded beyond their wildest dreams. And predictably, much of the mainstream business media and market regulators have been aghast. Some analysts have wondered aloud as to whether” foreign powers” have been involved. Dark comparisons have been drawn between the Reddit gambit and the way Facebook and Youtube have been used by domestic terrorists and right wing extremists. There have been calls for intervention and market regulation to stop what is happening to GameStop, now that the same techniques seem to be spreading to the pumping up in value of other ailing stocks like Blackberry.

Incredible. At best, there was only a bit of handwringing on the sidelines when the Wall Street tycoons were doing exactly the same thing throughout 2020. By and large, it was seen to business as usual when hedge funds, tip sheets and brokerages were fuelling speculative and highly profitable ( to them) frenzies that had nothing to do with adding value, building corporate infrastructure, creating jobs and doing all those other efficient and productive things that market investors allegedly do, to society’s benefit.

Yet as soon as Wall Street itself became the target – and the Reddit manoeuvre on GameStop has cost some hedge funds billions of dollars – there have been loud calls for market regulation, in order to protect the entrenched players. What the GameStop saga illustrates most of all is the belief that that there should be one rule for the one per centers, and a different set of rules for everyone else.

In order to understand the GameStop gambit, it is necessary to get your head around the practice known as “short selling.” Here’s a good, succinct explanation from the New York Times:

Short-selling works this way: An investor, who expects a stock price to fall, borrows shares of that company from another investor for a fee and sells it immediately, hoping that when the price does fall, they can buy the shares back cheaply, return them to the owner and pocket the difference.

There is a certain level of risk involved :

If the stock rises, the short seller is exposed to losses that are theoretically infinite. (After all, share prices can keep rising, while they can only fall to zero.) For that reason, when a bet goes wrong, short sellers rush to repurchase the shares they borrowed so that they can return them and exit their trades — a process known as covering.

That’s what happened/is happening in spades with GameStop and with other chosen stocks of the Reddit investors mobilised on the Wall Street Bets website :

As retail investors began to buy up its shares and options — many of them egged on by Wall Street Bets and other forums — its stock began to surge, forcing the short-selling hedge funds to buy back the borrowed shares at a higher price, which itself pushed the stock price higher. In Wall Street parlance, this is a “short squeeze” — a strategy sometimes employed by sophisticated investors against one another.

Why GameStop ? It may have had something to do with the Reddit crew on Wall Street Bets noticing back in May 2020 that over 80% of the trades in GameStop were being done by short sellers. So they grasped that if they wanted to turn this back onto the institutional predators – ie the hedge funds that buy short, and then use their networks of tip sheets and brokerages to spread the word that the stock is heading downwards, thereby minimising the risk surrounding their profit taking – then GameStop probably looked like an ideal vehicle.

As Enjeti says, the Reddit people are gamblers too, so don’t try this at home. In fact, no-one knows what effect the inevitable unravelling of this stock will have on the small investors who put their own money into teaching Wall Street this salutary lesson. Some will have already made a lot of money, some will lose if they’re still holding the shares when things finally do go south. But for now, the schadenfreude involved in watching capitalism’s biggest predators take a beating is gratifying. Moreover, any subsequent regulation by the Biden administration will be difficult to target. Trying to outlaw Reddit-style pile-ons surely would not be able to avoid penalising the same kind of anti-social behaviours by the usual cartel of institutional players.

Footnote: Here’s an update, as Gamestop share values plunged (temporarily) after Reddit moderators briefly caused Wall Street Bets to close for an hour. Even so, GameStop shares were still sitting at $US292 earlier today. Blackberry and other targeted stocks have also fallen in value. We may be nearing the end game. Forbes magazine

offered some thoughts yesterday on the possible outcomes.

Footnote Two : And now the Robinhood app with which the Redditers launched their mission has halted trades in GameStop and seven other stocks caught up in the Reddit gambit.

The move slammed the upward surge in their share prices into reverse and sparked allegations that the hedge funds had wielded influence over Robinhood and other trading platforms to stop the rout. The fallout even caused unlikely accord between opposite extremes of the US political spectrum, with Republican Ted Cruz and Democrat Alexandria Ocasio-Cortez both calling for a hearing into the decision to halt the trades.

Ironically, the app was supposed to ‘democratise’ financial trades. Like other aspects of democracy, Robinhood seems vulnerable to pressure, if and when the elites feel their interests are being threatened.

Watching Tucker Carlson on Fox News is never good for your mental health. But it has been fascinating in recent weeks to watch Fox try and navigate the waters now that the conservative flagship Donald J Trump has been sunk. In response to this calamity Fox has chosen to go hard, hard right to fend off the challenge from the likes of the upstart NewsMax network, which has been eating Fox’s lunch over the past three months with the “Stop The Steal” crowd, Yet interestingly, Fox doesn’t seem to be featuring Trump himself. (Twitter may not the only outlet to have de-platformed the 45th president.)

How is this Trumpism-without-Trump strategy playing out for Fox? Really, really badly.

For the first time in 20 years, Fox News can no longer say it’s the top-rated cable news network. In fact, from Election Day through Biden’s inauguration, Fox not only didn’t finish on top — it also finished behind both CNN and MSNBC in total viewers.

And the details are grim.

From Election Day through Inauguration Day, when Democrat Joe Biden was sworn in to succeed Trump as president, CNN was the most-watched cable news network in both total viewers (1.8 million) and those 25-to-54 (501,000), the key news demographic, according to Nielsen ratings.Fox dropped to third (1.5 million) across the day, trailing MSNBC (1.6 million), although it narrowly leads MSNBC (283,000 to 278,000) among viewers ages 25 to 54. CNN also took over the top spot among viewers in the key demographic in prime time, where Fox features its biggest hitters – opinion hosts Tucker Carlson, Sean Hannity and Laura Ingraham – although Fox remains No. 1 overall.

As you might have expected, Fox viewers were not interested in watching the Biden inauguration. On the day, CNN was No. 1 and Fox finished last among news networks with 2.2 million, the exact reverse of the viewership for Trump’s inauguration day in 2016. As one of the few people who did watch Tucker Carlson on Fox on Inauguration Day, I can report that the attack lines have been pretty consistent.

Then and since, Carlson and his guests have kept hammering away that (a) the Pentagon/NSA elite and its liberal minions are back in power, and (b) these Biden liberals and deep state operatives will tolerate no dissent from their godless worldview. That s because (c) they’re rich, heartless and totally detached from the lives and challenges of ordinary citizens. Look at how many celebrities were invited to that inauguration ceremony! And besides (d) they’re all socialists and atheists who hate and despise you personally. Why, they’re calling you racists and “white supremacists” for the sin of standing up for honest, all-American beliefs and values!

The good news is that this sort of messaging doesn’t seem to be working for Fox, not anymore. Not without Trump standing alongside them.

Footnote: On that “celebrities” point, you can check out this pictorial link

to click on every person present at the Biden inauguration. Good to see that left wing “celebrities” like Amy Coney Barrett and Brett Kavanaugh were there. But even hardened celebrity watchers might struggle to identify the celebrity credentials of Lloyd Doggett, Paul Masto, Bill Pascrell Jnr and Randy Florke. All of them were at the Biden inauguration, though, whoever they are.