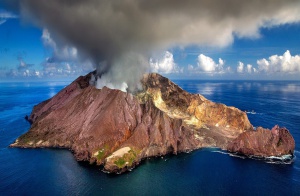 Somewhere in Heaven, Helen Kelly must be smiling about Worksafe’s criminal prosecution of 10 firms and three individuals for their roles in the lead up to the Whakaari /White Island tragedy. In tandem with the subsequent coronial inquest, these court proceedings will hopefully culminate in the creation ( finally!) of a central agency to regulate the adventure tourism sector and improve public safety on matters like risk assessment, safety guidelines, inspection, enforcement and injury reporting.

What Kelly achieved (as the driving force behind the 2015 Health and Safety At Work Act) was to reduce the death, injury and suffering in conventional workplaces such as forestry, fishing, manufacturing and farming. That 2015 legislation is now being applied by Worksafe to the adventure tourism marketplace. Unfortunately it will come too late for the 22 people who died and the dozen or more people who suffered catastrophic injuries in the events of December 9, 2019.

Better late than never though. Unbelievably this week, there have still been calls that this was a ‘natural disaster’ and that no-one should be held accountable for putting people in harm’s way… Because the laying of criminal charges “won’t bring them back.” Good grief. Such claims miss the point entirely. Besides providing justice for the victims for any dereliction of care that is proven, the prosecutions will also serve as a salutary means of deterrence.

Plainly, Worksafe’s court proceedings will establish and affirm the standards that society expects and the law requires of people entrusted with a duty of care. Sure, no-one could predict to the exact day on which the eruption would occur, but GeoNet’s raising of the risk level to Level Two had signalled that an eruption could be imminent. Yet beyond that point, the system (incredibly) contracted out all the key decisions to the tour operators and island owners who had a commercial incentive to push their luck. This yawning gap between science and commerce needs to be bridged, in the interests of public safety.

One possible change: surely, the likes of GeoNet need to be given the powers to declare an ‘exclusion zone’ around a volcanic site. Such powers are reportedly common in foreign sites of volcanic tourism. That would be a good start. And since tourism activities are inviting people into risk situations for commercial gain, the ultimate decisions on access cannot be left to the people who have a profit incentive sitting alongside their alleged local knowledge and expertise. No doubt, the court proceedings will consider the extent to which “following established guidelines” will count as a compelling defence. It may not, if it transpires that the “guidelines” in question amounted to little more than “so far, so good, so let’s keep doing it.”

Disdain for ‘red tape’ is a safety problem

On that point, the Whakaari/White Island tragedy has been another reminder that New Zealand has a tendency to wing it on safety procedures, until tragedy reveals the inadequacy of existing practice. In 2009 for instance, the Christchurch teenager Catherine Peters died in a mis-managed bungee swing from a bridge in the Manawatu Gorge. It transpired that for nine years of the firm’s existence, the operator reportedly had no staff to assist him, no-one to give him breaks, no-one to keep back crowds, and no-one to double-check that the ropes or harnesses were secure.

“The fact that the swing had operated for years without incident was a matter “more of good luck than good management”, the coroner noted.

Exactly. So far, so good will serve as an operating principle…only until the luck runs out and people die, or suffer grievous harm. In the Whakaari/White Island case, the court will be tasked with examining whether the previous ferrying of tourists (without incident) to the lip of an active volcano during a Level 2 GeoNet alert, had also been more good luck than good management. Playing Russian roulette and surviving for a while doesn’t really validate the practice.

Preventive care just doesn’t seem to be in our genes though. Bravado, a “she’ll be right” attitude, and the drive to maximise profit have proven time and again to be a toxic national cocktail, especially so when the relatively few safeguards that do exist get treated as impositions to be endured at best, and flouted at worst. If the Worksafe court proceedings can succeed in driving such attitudes and practices out of adventure tourism, it could even be an industry worth saving, post Covid.

In the wake of last year’s eruption, the flaws in our ability to monitor and regulate adventure tourism came to light. Evidently, no reliable comparative data exists on the true extent of the deaths, injuries and expense associated with this sector, because there is no centralised system – or requirement – for recording the incidence and nature of mishaps when they do occur.

Part of the reason for this information void has been that adventure tourism has come to straddle so many different domains. Transport, aviation, maritime and labour are all part of the picture, but with differing oversight responsibilities, safety standards and data retention requirements. Even the annualised figures that exist commonly exclude deaths by drowning, or from flying or boating mishaps.

The prevailing ideology in government and business circles hasn’t helped, either. In a climate where “red tape” and regulation are seen as a fussy hindrance and disposable cost burden, there has been little incentive to improve safety procedures. Even after the Pike River disaster (another classic example of cost- cutting co-inciding with lax oversight) no one in central government or the industry has been much of a mind to invest the resources for preventing – or keeping a reliable tally – of the problem.

This Kiwi “she’ll be right: attitude has been reflected in the protestations that visiting the island was an inherently risky activity whose outcome couldn’t possibly have been predicted, let alone prevented. There is so much that’s wrong with that line of thinking it is hard to know where to start. Had the victims been adequately informed of the deadly risks they faced? Or alerted to the implications of a raised Level Two GeoNet warning – let alone warned about the absence of any practical rescue measures if the worst did happen? Had they been told that scientific staff had been forbidden to access the island until the risk conditions had improved? Almost certainly not.

Even when adventure tourism customers sign waivers, the continuation of the commercial tour surely sends a counter-signal that the current risk levels are acceptable, and that business as usual can safely proceed. Surely, it would be ridiculous to expect tourism customers to be omniscient about the risks on the day, at a level beyond that being demonstrated by the experienced local tour operators. To shovel all the responsibility back onto the customers would be highly unjust. Customers can reasonably expect a higher, not a lower level of care from the people they are paying for the service.

It is not as if all adventure tourists are young, and keen to fill their boots with the thrills of danger. These tours were being marketed – on cruise ships for instance – to older people in the 40 to 60 age group, and were being packaged as expertly guided encounters with natural wonders. The separate court action pending in the US courts will determine whether the Royal Caribbean cruise line (from which several of the victims came) had (a) adequately warned their passengers and (b) sought advice from the local tour operators about the implications of the raised levels of risk identified by GeoNet in the preceding weeks. Some of those cruise ship passengers had signed onto their Whakaari/White Island tour option months beforehand. On the eve of their tour, were they specifically and adequately warned about the now-heightened levels of risk?

Obviously, the next disaster won’t occur in the same setting, and the same mistakes won’t be made in the same fashion. Hopefully however, the Worksafe court proceedings, the coronial inquiry and the American court cases will all work together to engender a greater respect among industry operators for risk and safety precautions. At the end of the day, it won’t be easy (or cheap) to train sufficient numbers of inspectors to competently monitor the borderline between acceptable and unacceptable levels of risk in this sector. But if we continue to live in denial that this country’s adventure tourism has a recurring problem with its risk perceptions and risk management, the cost will continue be racked up in lives, injury and grief.

Footnote: Worksafe’s court actions are all to do with compliance with the legal requirements preceding the disaster. The lack of a Plan B in the wake of the eruption should have underlined the need for the response side of the tragedy to be also examined by government, and with a similar view to improvement.

After all…on the day, the official response seems to have been to shut down access to the island, effectively abandoning the victims to their fate. There seemed to be no will and no strategy for quickly launching a rescue effort.. The brave rescue operations that were mounted by volunteers – and which did save lives – were carried out before officialdom got its act together, and even then were in effective defiance of Police and civil defence prohibitions.

This situation needs to be addressed, but the government seems very unwilling to do so. It has been depressing to hear the likes of Kiri Allan, the newly minted Minister of Emergency Management, close ranks and claim that there is no need for an inquiry into how the response effort was managed. We seem determined to fly blind into the next disaster.

Interesting that New Zealand has been more moved to complain about an offensive tweet by a Chinese official about the Australian forces’ killings of 39 Afghan civilians than we were about the actual killings themselves. The best we managed on that score was that it wasn’t us, and that the Brereton report didn’t implicate us…but beyond that, nothing. Yet the moment the Chinese try to satirise the killings, we’re outraged. At the satire.

Talking about this sort of thing, wouldn’t it have been nice if our scientific community – the folks at the Monaghan Institute? The Royal Society? – had felt moved to publicly denounce the politically-inspired killing of Iran’s top nuclear scientist? One would have thought that at least one of the nation’s scientific bodies or university science departments would have felt impelled to publicly point out that killing scientists for political reasons is a bad thing, really.

Footnote: Yet as it should, the international science community can always stir itself to outrage when Iran is the perpetrator. If only it could be just as concerned and as scientifically balanced when Iranians are the victims.