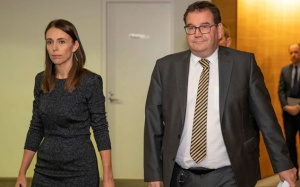 Long on aims, short on delivery. Greta Thunberg is not the only person who feels that the Ardern government is better at aspirations than achievement. Once upon a time, Jacinda Ardern may have called climate change “this generation’s nuclear free moment” but…during the same fortnight that New Zealand declared a climate emergency, this country was not awarded a speaking slot and did not take an active role in a major UN climate change virtual conference, apparently because we didn’t have any ambitious new proposals to bring to the table. In fact:

Of the 43 Annex I countries – industrialised nations which have benefited the most from greenhouse gas emissions and therefore have the greatest obligation to reduce emissions – just 12 have seen net emissions increase since 1990. New Zealand is one of those.

Thunberg may have got it wrong when she said this country had committed itself to reducing less than one per cent of the nation’s emissions overall by 2025. She seemed to be equating the country’s entire emissions reduction effort with its commitment to reduce public sector emissions. By 2025, Climate Change Minister James Shaw is hoping this will result in a 7 per cent cut in our total emissions…Yet even so, as Stuff recently reported, there has to be a question mark over just how much of a reduction gain we’ll actually get from state housing, schools and hospitals. And besides…the estimated gains have to be shaky, given that as of September 2020, only eight out of 46 state agencies have up-to-date figures on their carbon emissions.

You get the picture. Even amongst the allegedly radical Greens that centre-left voters were keen to see returned to Parliament in order to keep Labour honest, radical change is not in prospect. Thunberg may have been wrong on the details, but she was dead right in the thrust of her criticism. Our emissions reduction efforts have not engaged with the urgency of the problem. Unfortunately, this failing is indicative of a far wider problem.

Voting For Change
Most of the people who voted for Labour this year were voting for change – and not for business as usual with leavenings of caring concern on the side. Voters not only gave Labour (and the Greens) a mandate for significant change, but also handed them the power to follow through on it. The social needs – in housing, health, poverty, student debt, benefit levels etc – are glaringly obvious. So if not now, when ?

Imagine if it had been a centre right National/Act government that had just been swept into office by similar margins. By now, they’d be starting to sell off every existing state enterprise to their mates, would be scrapping the remnants of the welfare safety net and awarding themselves massive tax cuts. It would be the whole Thatcherite package once again, on steroids. Nothing remotely comparable seems to be on the agenda of this Labour government, and the Greens are abetting Labour in its displays of virtue signalling.

So far, Labour has been more willing to announce the radical policies that it won’t pursue be pursuing – no wealth tax of any sort, no meaningful capital gains tax on Ardern’s watch – than announce what radical steps it will take. Much has been made of the 400,000 former National voters who crossed over to Labour in the October election. Retaining them seems to have become a pressing Labour priority.

There’s no good reason for Labour letting itself be trapped in this way, by its own policy triangulations. This year, 1,443,546 people voted Labour, 226,754 voted Green, and a further 33,632 voted for the new, leftist version of the Maori Party for a grand total of1,703,932 people voting for a centre-left agenda. To govern as if the imagined tolerance levels of only 400,000 of those 1.7 million people should now dictate Labour’s actions seems utterly perverse. After all, most of the voters in question are likely to be fairweather friends liable to desert Labour just as soon as National gets its leadership problems sorted.

To repeat : Labour had been empowered to govern alone and has won the first absolute majority ever recorded under MMP. Given the historic opportunity on offer, it isn’t enough to merely build a few more houses, improve public transport a bit, and tinker with the income abatement rates for the few beneficiaries able to get a job at the local supermarket. In no particular order, here are a few things a transformational centre-left government might do:

1.Write off student debt. This is a matter of generational fairness. The boomers enjoyed free education and an easy employment market. Once in power they awarded themselves massive tax breaks and have bequeathed a socially toxic housing market where – largely – only those blessed with wealthy parents can ger a foothold. The least that can be done is to remove the student dent millstone, thereby making saving for a housing deposit more of a possibility. And yes,. free tertiary education used to be a birth right. It could be again.

2. Raise benefit levels immediately as recommended by the government’s own
Welfare Expert Advisory Group. This would reduce poverty overnight, and provide a major injection into the retail economy. Given the extent of raw need, and because unemployment is bound to worsen in 2021 from the effects of the pandemic, an immediate increase to benefit levels should be this government’s number one priority.

3. Scrap the array of health charges preventing sick people from accessing primary health care. Currently, the cost barrier of going to the doctor imposes hardship on families unfairly vulnerable to the diseases of poverty. It is also a false economy that induces people to postpone preventative care until conditions worsen and people have to present for emergency care at the hospital door. Again, boomers enjoyed free primary health care access when young. They should take pains to bequeath it to their children and grandchildren.

4. Make agriculture pay for its pollution. The government should cease pandering to farming’s demands that greenhouse gas emissions and waterways pollution can only be reduced at a speed (and to an extent) that imposes no additional costs on farmers. Currently, farming seems to believe it has a right to expect taxpayers to pick up the tab for the environmental damage it leaves in its wake. This has to stop.

5. Tax and regulate the banks in ways that reduce the extortionate levels of profit they funnel offshore every year, and the predatory practices they pursue against their New Zealand customers. Here’s a small example : before the festive season began, why didn’t this Labour government have regulations in place to make banks reduce the extortionate charges they levy on local retailers for Paywave transactions – which are pitched in New Zealancd at percentage rates well above what the banks charge in Australia and the UK?
The average fee charged for credit cards is 1.6 per cent but they can top 2 per cent. That compares to 0.8 per cent on average in Australia and 0.5 per cent in the United Kingdom.In New Zealand, a typical contactless debit card payment costs 1.2 per cent, compared to 0.6 per cent in Australia and 0.2 per cent in the UK.
More importantly, why is Labour routing our pandemic -related quantitative easing (QE) measures though the banks as middle men – thereby allowing them to clip the ticket on these transactions – rather than enabling the Reserve Bank to make the money directly available to government?

The list could go and on. There’s an argument for using QE measures to ensure everyone a basic income in the light of what the pandemic, workplace automation and AI are already doing to employment. (The risk is that a cost-cutting future government could easily reduce a UBI-like scheme to subsistence levels.). But you get the picture. In isolation, none of these measures qualify as “transformational.” That term should require the government to enact systemic changes – and not just to improve things here and there in their own sweet time as the current economic settings permit.

Since the election, Labour appears to have set out to dissipate any momentum from its victory and to lower expectations. One can only conclude this is because it is gun shy of the political flak, if it sought to do more. Whatever the reason, there an evident mismatch between the opportunity for change, and the appetite for political risk. Grant Robertson learned his trade in the similarly cautious administration of Helen Clark and Michael Cullen. Both he and Ardern would have been right at home in any of Tony Blair’s “Third Way” governments. (Ardern worked during the mid-2000s as a senior adviser in a policy unit within Blair’s Cabinet office.) No doubt, both Ardern and Robertson would like to reduce poverty, but only without disrupting the economic settings that keep on generating it. That’s the deep irony. Voters have put the potential for revolutionary change within reach of a Labour leadership that is instinctively averse to it.

Footnote One: Arguably, New Zealand has had only two ‘transformational’ governments in the past 80 years. The Savage government of the mid-1930s ended the Depression, created the welfare state and promoted egalitarian norms that served the country pretty well for the next 50 years. The first Lange/Douglas government of the mid-1980s privatised key public assets and promoted a market ideology that still sets the boundaries on what is regarded to be acceptable public policy. Both governments changed this country utterly. At the time, they took the public with them.

Footnote Two: BTW, can Ardern really, and unilaterally rule out a wealth tax and a meaningful capital gains tax? Labour went through a lot of convulsions a few years to create a better balance between the party and its parliamentary wing. In the process, the membership rank and file and the union affiliates took back some of the power, Since then and by winning elections, Ardern appears to have single-handedly pulled power right back into the parliamentary wing once more..

Yet surely, it shouldn’t be her call alone as to whether and how the party chooses to tax the rich. Similarly, Ardern shouldn’t be allowed to hold the party to ransom – no meaningful capital gains tax or I walk – on other policy fronts either..