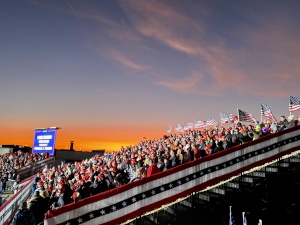 UPDATE: Biden supporters shouldn’t count their chickens just yet. There is still a victory path for Trump if Biden loses Arizona, and Trump wins Pennsylvania and Georgia. Clearly Arizona was called for Biden insanely early by both AP and Fox News. The counting of the 415,000 currently remaining has been breaking of late to Trump at exactly the same ratio 59/41 as he needs to catch up to Biden overall. But as the 538 site says, some of the remainder are from Pima County ( capital : Tucson) which is somewhat bluer than the county where Trump has been making his recent gains. In the voting to date, Pima went nearly 60-38 for Biden, which is somewhat reassuring.
Georgia is still very, very close, and there will be a final tally ( supposedly)between 6pm and 9pm tonight NZ time.. Biden is gaining ground from the Fulton CountyAtlanta area. But will it be enough?
In Pennsylvania, there is also some doubt as to just how many Biden votes may still be awaiting counting in Philadelphia. This state probably won’t see a result before Saturday NZ time result.

UPDATE: Biden has reportedly won Michigan by some 67,000 votes, apparently on the back of a turnout among black voters in Detroit exceeding what Hillary Clinton managed in 2016. Together with Biden’s victory in Wisconsin this lifts Biden to 253 Electoral College votes. Trump is currently on 214, with 71 Electoral College votes outstanding.

Let’s be clear about what US President Donald Trump is doing. Last night’s declaration of victory before all the valid votes had been counted is an ongoing attempt at a presidential coup d’etat. It is a coup that he expects to be rubberstamped by a compliant Supreme Court and enforced on the streets by his goon squads of armed militia. If this was happening in Venezuela, New Zealand’s Foreign Minister would be denouncing it, and rightly so. So… where is the rebuke from our Minister of Foreign Affairs, and the defence of the principles that underpin democracy?

Elsewhere – in Australia and in Ireland, for example – their respective foreign ministers have already issued statements that implicitly denounce Trump’s actions:

Australia’s shadow foreign secretary Penny Wong, called for all the votes to be counted and the democratic process to be respected: “It’s in Australia’s interest that America remains a credible, stable democracy,” she tweeted.

In an apparent shot at Trump, who falsely claimed victory, Ireland’s Foreign Minister Simon Coveney said, “This election is not over and it won’t be over until all of the votes have been counted. So I think it’s unwise for anybody regardless of who they are, to be declaring a result.”

At some point today, Prime Minister Jacinda Ardern, and/or MFAT needs to be issuing a statement along similar lines. It is sad to watch democracy in the United States being degraded, but that means we shouldn’t be sitting silent on the sidelines as it happens, for fear of annoying the despot.

Ironically, the victory that Trump eked out in 2016 among the Rust Belt states in the Midwest is being played out again, this time in reverse. On the Electoral College journey to the required 270 vote figure, Democratic contender Joe Biden has 227 votes from the contests already declared, as opposed to Trump’s 213. The outstanding states, current margins and percentages of the votes still to be counted are:

Wisconsin (Update) Wisconsin has been called for Biden, but by a margin so thin that there’ll be a recount.

Pennsylvania (20 Electoral College votes) 80% counted. Trump leads by 400,000, but big Democratic-leaning blocs from Pittsburgh and Philadelphia are still to be counted.

All of these contests – except Pennsylvania (and possibly Nevada) – should be declared later today. The arithmetic says Biden could get across the line to 274 from his current 227 simply by winning Wisconsin, Michigan, and Arizona. In that scenario, Pennsylvania would be a bonus. Conversely, if Trump wins Georgia, Pennsylvania and Nevada, he still gets to only 255 Electoral College votes from his current 213. Meaning: it’s still a knife edge but Biden has more reason to be hopeful.

Whether a President Biden could govern with anything like a normal Democratic agenda is another matter – faced as he would be with a hostile Supreme Court and a Senate still in the hands of his opponents. Clearly, the Democrats have failed to flip the Senate after losing Senate contests in Iowa, Maine, North Carolina and South Carolina. Both of the Georgia senatorial contests may go to run-offs in January that the Democrats would probably lose.

In Florida, Biden performed well among seniors and suburbanites, but never recovered from the devastating results in Miami-Dade County, where Latino men apparently bought into Trump’s messaging that Biden would be a weak tool in the hands of radical socialists who would tank the economy. Nationwide, Trump has for months enjoyed good poll numbers for his handling of the economy. In addition, his supporters seemed receptive to his messaging that everything would have been great if China hadn’t inflicted a pandemic on the US for which Trump supporters largely exempted him from blame. To some extent, Trump prevailed among those who prioritised the economy, Biden among those who prioritised the handling of the pandemic.

This story will be updated over the course of the day, as returns come in.