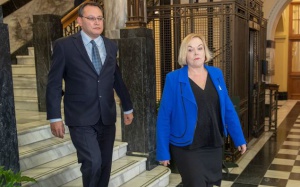 Good to hear there is at least one Covid vaccine in the pipeline, and that Pfizer is claiming a 90% level of efficacy for it. In National Party circles, there is an even higher level of certainty that Judith Collins will not be leading National into the 2023 election, so yesterday’s choice of Shane Reti as her deputy had a mirage-like quality to it. In time, we all know this team will dissolve and fade, as if it had never been.

That being the case, why would any National MPs with ambition – Mark Mitchell, Michael Woodhouse etc – put themselves forward for a position known to be transient? They have good reason to bide their time. Like the rest of their caucus colleagues, they’re hoping that National’s faith in Christopher Luxon (as The One who will lead them back to victory) is not going to be just one more mirage.

In the meantime, Shane Reti is an ideal place holder No enemies, has expertise in the health area, and is no threat to Collins, whom he calls his “dream leader.” Yikes. It is a low hurdle, but Reti brings more plusses and fewer liabilities to the table than Gerry Brownlee. In any case, its not as if the Labour government is going to be brought to its knees by National’s efforts. Labour’s eventual demise is likely to be by its own hand, either by actions that misfire, or by inaction born of timidity. National merely has to stay open for business. It also has to hope and pray that the Act Party doesn’t do anything rash that might damage the centre-right brand in the interim.

Footnote: Collins has already hinted that today’s reshuffle of caucus roles will elevate Barbara Kuriger and Mark Mitchell. Collins has the tricky job of managing two former leaders in Simon Bridges and Todd Muller – one of whom still wants his old job back – and there’s also one potential future leader (Luxon) in the frame. Possible solution: why not share the Finance/Economic Development roles between Bridges and Luxon, and let them sort it out behind the bike-sheds? Former Finance spokesperson Paul Goldsmith is likely to have to retrain. A Transport or Infrastructure role might give Goldsmith some valuable skills in filling in holes. We’ll find out the details at 1.30pm this afternoon.

Evidently, no leading figure in the Republican Party is going to step forward and tell Donald Trump that he’s lost, thereby earning themselves the eternal hatred of the MAGA faithful. For any Republican with ambition, it would be political suicide to be seen to be the bringer of the bad news, and as a premature colluder with the Democrats. Instead, the Republicans are (a) indulging Trump, (b) tacitly maintaining a“this election was stolen” myth that none of them believe, but which is very useful for (c) keeping the faithful fired up. Not just for January’s Senate runoff contests in Georgia, but forever.

Good luck to Biden then, with his unifying rhetoric. Yes theoretically, they’re all Americans. But being at war with reality and with their fellow Americans has just delivered the Republicans several major gains in the House and continued control of the Senate. Why on earth would they change their ways? Where’s the incentive for them to do so? Trump will pass, but Trumpism is a winning brand. The fallen hero’s grievances will be the altar at which Republicans worship for decades to come. Move over, Ronald Reagan.

As for Trump, why would he have an exit strategy? He has always responded to his business failures by defying the banks and his creditors. Why would he now declare political bankruptcy and concede, when he’s always been rewarded before for living in denial and expecting others to bail him out?

This call to violence (from the second ranking Republican in the House) is not exactly what anyone would call “tacit”.

Footnote Two: Supposedly, a Trump TV network could eventually be on the cards in 2021. (Investors very welcome.) Probably, it wouldn’t be featuring Donald Trump 24/7. Even the MAGA faithful might baulk at that prospect, but one can just imagine the programme schedule. Ivanka as the new Oprah. The Kellyanne Conway Hour, followed by…Eric, Don Jnr and Friends. Rudy’s Rumpus Room. And for nostalgics, Meet The Press with Sean Spicer. Seriously, there could be room in the market for Trump TV. Fox News has had the centre-right/far right corner all to itself for a very long time.

And interestingly…over the past few days, Fox has been putting daylight between itself and its former idol. This new era of distancing was demonstrated by this incident, and by these comments from Fox host Laura Ingraham. Both examples suggest that Rupert Murdoch has concluded that President Trump has passed his ‘use by” date. Embracing reality in this way is a high risk strategy for Fox though, since Trump has been their magic amulet. Grim times ahead, maybe. Reportedly, Fox’s coverage of the Biden victory speech rated lowest among all the major news outlets. Their audience didn’t want to see it, hear it, or think about it.

Pfizer and its German partner BioNTech have announced some promising initial stage three trial results for their Covid-19 vaccine. The good news emerged in a press release, not as a peer-reviewed finding. A 50-70% efficacy rate would normally have been greeted as a strong outcome. The 90% efficacy finding is even above the usual rate for flu vaccines. However, this may be the “best case” result for this vaccine, in that the initial results are from among only 94 participants in a trial involving 44,000 volunteers. That efficacy rate may reduce, as more of the stage three results come in.

As the New York Times report on the Pfizer announcement says:

Half of the participants received two doses of the vaccine three weeks apart, and half received a placebo. The first analysis was based on 94 volunteers who developed Covid-19. [There was no information] on how many of those cases came from participants who had been vaccinated. But with a rate of more than 90 percent effectiveness, most had to have been in the placebo group.

So far, there has been no evidence of serious side effects. As yet, the duration of the immunity delivered by the vaccine is not known. The trial results were achieved over a 28 day period after the initial dose. The vaccine requires 2 shots to be effective. So if and when our authorities clear it for use, New Zealand’s initial purchase of 1.5 million doses of the Pfizer vaccine would extend to 750,000 Kiwi recipients. Presumably, the initial batches would go to front line first responders and those otherwise in the high risk category. Obviously, all this is welcome news. But much still remains to be known and verified:

….Because the trial is continuing, an independent board reviewing the data has not [revealed] other details, such as how many of the people developed mild versus more severe forms of Covid-19 — crucial information that the F.D.A. has said it will need to evaluate any coronavirus vaccine. The agency has also asked for other detailed manufacturing and safety data that could take weeks to review.

Assuming all goes well with that process (and supposing the subsequent findings largely confirm Pfizer’s initial claims) this will also bode well for the vaccine being developed by Moderna, which – as the NYT says – uses a similar mRNA technology. Moderna says it will release its own interim findings later this month. Very basically, here’s how the technology works:

BioNTech used a technology that had never been approved for use in people. It takes genetic material called messenger RNA and injects it into muscle cells, which treat it like instructions for building a protein — a protein found on the surface of the coronavirus. The proteins then stimulate the immune system and are believed to result in long-lasting protection against the virus.

Fine. Both the Pfizer and Moderna vaccines use technology that requires ultra-cold storage (ie from the laboratory overseas to New Zealand to the patient) in order to remain effective. This necessity to retain a minus 70 degree temperature will be problematic for any distribution plan here. (In time, local manufacture of the vaccine would lessen some of the cold storage difficulties.) These would not pose insurmountable problems – but if other comparably effective vaccine candidates emerge in the coming months, the relative ease of storage and delivery will be a factor in how heavily the New Zealand government will furrher invest in the Pfizer/Moderna options. As for the timetable, it still looks like being this time next year before the wider public can hope to have ready access to a vaccine that offers some level of protection against Covid-19.

Time To Have The Talk

Hard to pick an appropriate song for America’s current situation. “Break It To Them Gently” by Burton Cummings? “Call Your Girlfriend” by Robyn? (Joe Biden certainly wants America to call Trump, have the talk, and tell him that the country has found somebody new..) Given the psychedelic bad trip we’re all stuck in, Vanilla Fudge’s agonised version of “ You Keep Me Hanging On” has its charms. But maybe the message should just be “ Hit The Road, Jack” …

Also, it would be great if some-one could wheel up a sound truck outside the White House, and play this majestic kiss-off by Roy Orbison at full volume: