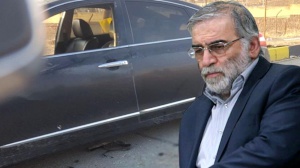 As even the US mainstream media has been reporting, the prime motive for the murder of Iran’s top nuclear scientist Dr. Mohsen Fakhrizadeh (by Israeli or Saudi operatives, or both) has been to poison the situation that the next US president will inherit. At best, there was only an outside chance that the incoming Biden administration and the outgoing liberal regime of Iranian PM Hassan Rouhani could have revived the Iran anti-nuclear deal that Rouhani had negotiated in 2015 with Barack Obama. Deliberately though, America’s allies have now made it impossible for Biden to pursue that option.

In the time remaining to Rouhani before he leaves office at the mid 2021 elections, Rouhani cannot possibly negotiate with a United States that (a) welshed on its side of the original deal (b) tried to wreck the Iranian economy (c) assassinated General Qassem Soleimani and now (d) has given the greenlight for its allies to murder Iran’s top scientist. No civilised country can behave as the US has been doing in the Middle East and then expect other countries to deal with it in good faith.

At other times in the past, Israel has been strongly suspected of murdering the scientists in the regimes it opposes. (See below.) In passing though, the killing of Fakhrizadeh has once again underlined the folly of US President Donald Trump reneging (in 2018) on the Iran nuclear deal. Imperfect though it was, that deal created a workable trade-off. Iran would halt any progress to nuclear weapons, submit to demeaning inspections by external authorities, and receive (in return) opportunities to trade with the West. Iran complied: the US didn’t. Trump not only scrapped the deal, he imposed harsh economic sanctions on Iran and murdered Soleimani, the most widely respected political leader in Iran – all in order to bludgeon Iran’s leaders back to the bargaining table.

That strategy has failed, utterly. Why Iran would ever re-negotiate any deal with a US incapable of keeping its word was always a mystery. In any case, the US trade and financial sanctions have caused extreme hardship to ordinary people – but all this has achieved has been to undermine public support for the liberal government, and justify the hardliners’ position that it was always naively stupid to trust the Americans in the first place.

In the June 2021 election conservative hardliners will almost certainly prevail. Meanwhile, the Trump strategy has not curtailed Iran’s support for the Houthi rebels in Yemen, or for its foreign policy initiatives in Syria and Lebanon. Given that it now had no incentive to do otherwise, Iran has also recommenced very early work on re-building a nuclear energy capability.

In fact, the trade openings to the West originally promised under the 2015 nuclear deal had been seen by the mullahs as a dangerous threat to their grip on power. The mullahs themselves are corruptly insulated from the hardships caused by the US sanctions. (Soleimani was widely popular because he was seen as the exception to the corruption among the ruling elites.). In practice, all that the overt hostility to Iran (by the US, Israel and Saudi Arabia) has done is to enable the mullahs to justify the strict surveillance measures and security crackdowns on an Iranian public increasingly disenchanted with the dominant role of the mullahs in Iran’s public life.

That’s the tragedy here. The real losers have been the people of Iran – demonised abroad by the most brutal regimes in the Middle East (Egypt, Saudi Arabia, the UAE) and ruled at home by a regime of fanatics who treat the hostility of the outside world ( and of their own dissidents) as a badge of virtue.

Footnote: If Mossad agents were responsible for the murder of Dr. Mohsen Fakhrizadeh. it would not be the first time Israel has targeted scientists:

In 1967, Egyptian nuclear scientist Samir Naguib was killed in a car accident in the U.S. Naguib was reportedly planning to return to Egypt at the height of war with Israel to help launch Egypt’s nuclear program when he was killed. Another Egyptian nuclear scientist, Yahya al-Mashad, who headed Iraq’s nuclear programme, was killed in a Paris hotel room in 1980. In 1991, Lebanese condensed matter physicist Rammal Hassan Rammal died in mysterious circumstances in France.

In 2004, Iraqi nuclear scientist Ibrahim al-Dhaheri was shot dead as he was riding a cab in Iraq’s western city of Baquba. In 2010, Iranian quantum field theorist and elementary-particle physicist Masoud Alimohammadi was shot dead outside his home in Tehran. Iran accused the U.S. and Israel of killing the scientist, but Washington denied the accusation. Israel, however, did not deny or confirm involvement.

In the same year, Iranian nuclear engineer Majid Shahriari was killed in a car bombing in Tehran.

The individuals concerned are being targeted not simply because of the potential military applications of their work, but also for the contribution they were making to their respective countries’ wider modernising and development efforts.

Footnote Two : As the US Middle East expert Professor Juan Cole has pointed out in his response to the killing of Fakhrizadeh, it is not as if Iran was on the brink – or anywhere near it – of building a nuclear weapon. Reportedly, Iran has enriched uranium only to 3.5%, well below the 95% needed to build a nuclear weapon. As Cole says:

You’d have to enrich the uranium to about 95% U-235 to make a bomb. Iran has never enriched beyond 19.5%, which is the level that is needed to run its small medical reactor, and is the cut-off for Low Enriched Uranium. There is no reason to think that Iran knows how to enrich to 95% for a bomb or has the various additional technologies that would be necessary to construct a bomb. Sometimes you see US journalists allege that Iran has “enough” enriched uranium to make “two bombs.” That is frankly ridiculous. You don’t make bombs by the amount of uranium you possess that is enriched to 3.5% or 4.5%. Without the necessary level of enrichment, you’d just have some rocks that could be used to heat water.

This lack of a palpable nuclear weapon threat from Iran’s uranium enrichment programme reinforces the view that the timing of the murder – and its motive – has been to fence in the Biden administration, and prevent it from making any gesture of goodwill to Tehran. More than ever, American foreign policy in the Middle East is being held hostage by its supposed friends and allies, and not so much by its alleged enemies.

Footnote Three: One of the other downsides of Trump scrapping the nuclear deal has been that this has apparently encouraged the mullahs to recommence the killing of Iranian dissidents living abroad. These lethal actions in Europe were relatively common in the early 1990s, and picked up again just after the failed Green Revolution in 2010 – but they were suspended in an apparent gesture of goodwill in order to get the 2015 nuclear deal safely negotiated. With that incentive gone, the killing of Iranian dissidents living abroad appears to have resumed.

Footnote Four: And just in case Iran looked like the only place where Donald Trump is trying to poison the foreign policy situation his successor will inherit, it isn’t. Trump is doing the same thing in Afghanistan, too. Not only will the Trump-ordered scale of troop reductions limit the ability of US forces to train Afghan forces, it will undermine the diplomatic efforts to strike a deal with the Taliban. US troop withdrawals were a prime negotiating card in those talks, and the active presence of US forces in the field was an incentive for the Taliban to make any deal at all. At home and abroad, Trump will be leaving Biden to pick up the pieces.