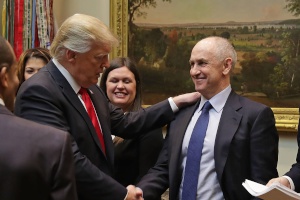 Being nominated by US President Donald Trump to head a key international organisation should have been the kiss of death for any nominee, even before Trump lost his bid for re-election. Throughout his presidency, Trump has done his best to wreck every single multilateral organisation to which the US belonged, including the World Trade Organisation, the World Health Organisation, NATO and Unesco. He has also violated almost every major international treaty the US had signed onto – from the Paris climate change accords to the Iran nuclear deal.

Yet merely because Trump’s chosen nominee to head the OECD – White House adviser Chris Liddell – is a New Zealander, National Party leader Judith Collins somehow thinks the Ardern government is obliged to support his bid, regardless. That’s a “no brainer” Collins says. Really? No brains is right. Sure, Liddell has skills. Whether he has better credentials than the leading candidate – former European Union trade czar Cecilia Malmstrom – is open to question though, even purely on merit.

Add in the fact that Liddell is Trump’s candidate, and the reasons are pretty obvious why it would be in New Zealand’s best interests NOT to throw our vote away in trying to foist the chosen one of a deeply resented lame duck US President onto the OECD. To Collins it would be “playing politics” to distance ourselves from Liddell. To everyone else, it looks like common sense. This isn’t at all like when Helen Clark ran for the top job at the UN. It looks more like the doomed candidacy of the less than widely loved Tim Groser to head the WTO, only worse. At a time when New Zealand is trying to negotiate a trade deal with the European Union, Malmstrom is the kind of friend we need.

Remember free trade? It was one of those business fads. It was in vogue in the mid 90s, when women wore polka dot blouses and hoop ear-rings, and men wore camouflage pants only semi-ironically. Back then, it was also held to be a good thing back for economic decision-making to be dominated by the ideological whims of the Reserve Bank governor. Central bankers were like gods back then. It was a different time.

Not anymore. Central bankers are all but impotent these days. Belatedly, there’s now a healthy scepticism about free trade spin. This week for example our signing onto the Regional Comprehensive Economic Partnership (RCEP) trade deal was met with little more than a cocked eyebrow. Oh sure, the RCEP will bring together 10 ASEAN countries and their partners Australia, Japan, China, South Korea and New Zealand. Big deal,

Yesterday, RNZ’s Corin Dann badgered new Trade Minister Damien O’Connor mercilessly about how and when the alleged $NZ2 billion gains from the RCEP might materialise. O’Connor didn’t seem to have the foggiest. Evidently, it won’t be before 2022, which sounded like a conveniently vague “soonish but not soon” kind of date.

We could have all done with more of that scepticism a few years ago, when the American-led TPP ( now minus the US, and re-named the CPTTPI) was being hailed as a “gold-plated, high quality” trade deal that would lift everyone’s boats. Well, it turned out that there was a lot of resistance – even among TPP member countries – to the predatory combination of US multinationals and greedy developed countries ( like us) who were lining up to get most of the gold on offer.

As for the “high quality”… This was a function of just how thoroughly the likes of Vietnam or Malaysia would agree to be gutted in exchange for winning limited access to major foreign markets. Ultimately, the Obama administration couldn’t get the TPP over the line before Trump pulled the US out of it. Ironically, Trump thought the TPP wasn’t one-sided enough. Apparently the deal would have tied the US into making some concessions to several (expletive deleted) countries.

Meanwhile, China had entered the scene in 2012, with its competing deal, the RCEP. It would be the deal that didn’t include the US, just as the TPP didn’t include China. To get the ASEAN countries and India (initially) on board, the RCEP deliberately diluted some of the TPP’s most poisonous ingredients, such as the extended copyright and medicine patent terms being sought by US firms. Last year, the RCEP also agreed to scrap the much- loathed investor-state dispute” mechanisms by which corporations could sue member countries.

All of this should be taken as a sign of just how feeble the “free trade” mantra has become these days. The RCEP is being signed onto precisely because it delivers much less than the original TPP, and with fewer obligatory concessions. It is Trade Lite, because there is no appetite for the hard stuff. Usefully, the RCEP will rationalise under one umbrella a lot of the trade rules currently contained in the region’s thickets of bilateral FTA’s. But crucially, as Malaysia’s International Trade Minister Datuk Seri Azmin Ali indicated on the weekend, the RCEP is fairer than the TPP (or its current CPTPPI manifestation) because it gives its ASEAN members far more breathing space :

“The RCEP is driven by Asean member states, and not driven by superpowers like the United States and other bigger economies….The RCEP also provides local players space to grow as the market in Malaysia is too small to expand. With RCEP, local players can engage and penetrate the global market, ” said Azmin.

Less is more. Malaysia has signed the CPTPPI, but has not ratified it. It has embraced the RCEP instead. That’s partly because the RCEP will offer few rich pickings for the service sectors from developed countries, that may have been hoping to win contracts for government procurement from the vulnerable likes of say, Vietnam or Malaysia. Trade may be getting less free. Meaning : less unfair. Good.

India is also refusing to buy the free trade snake oil, unless an antidote is provided. Originally. India was the dream target of the RCEP, both economically and diplomatically. Together China and India would forge a rival pact ( and a geo-political counterweight) to the US-led TPP. The RCEP did however, threaten to open up India’s vast internal markets to foreign goods, in exchange for technological transfers that might have enabled at least some of India’s elites to climb higher up the global value chain.

Except… India’s PM Narendra Modi came to see the dangers of India becoming a dumping ground for China’s cheap goods, either directly or via other South Asian countries. The RCEP also threatened to wipe out India’s legions of small manufacturers and their jobs in the process. Nor finally, did Modi buy the global value chain enticement, since foreign multinationals would quickly dominate that tier of the Indian economy as well.

Essentially, India concluded, both the RCEP and the CPTPPI were tools by which the multinationals – now facing rising labour costs in China – could shift their operations to lower labour cost countries like Indonesia, Vietnam, Thailand and (hopefully) India. In the end, Modi baulked. He pulled India out of the RCEP late last year. Still, a door to re-join the RCEP remains open, should India ever change its mind.

New Zealand has hoped the RCEP would have opened up India for our red meat exports. Too bad. What will be interesting to see – in the “soonish but not soon” medium term – is whether the Biden administration can reach an understanding with Iran and lift Trump’s draconian sanctions. If so, this would re-open Iran as a destination for our beef and dairy exports. Back in the 1980s, Iran used to take 25% of our lamb exports. After Barack Obama negotiated a nuclear deal with Iran in 2015, our exports briefly leapt back to over $100 million in value annually, with prospects ( in dairy products and beef) of quickly doubling those amounts.

Trump ended all of that. He reneged on the nuclear deal, slashed Iran’s lines of international banking credit, imposed harsh sanctions, and threatened to cut off US market access to any country ( such as New Zealand) that dared to trade with Teheran. We caved in, and kissed off the $100 million annual loss. Not even the free trade advocates made a whimper of protest.

Well, the bully has now been voted out of office. Even so, there will be many hurdles before New Zealand can hope to resume normal trade with Iran. Teheran will not want to be seen to be too eager to re-visit the nuclear deal. It will also – for obvious reasons – require the US to make the first round of concessions. Unfortunately, and thanks largely to the severe impact of Trump’s sanctions upon ordinary Iranians, the relatively liberal regime of Hassan Rouhani will almost certainly be replaced by one led by hardline conservatives after the mid 2021 presidential elections.

All of that aside, Biden will slowly try to re-align US policy in the Middle East. He is being predicted to distance the US from Saudi Arabia, and to resume aid once again to the Palestinians. Eventually, he is also expected to quietly restore Iran’s lines of international credit. Our banks – which previously have been too scared to transfer funds to and from Iran, for fear of ending up on a White House blacklist – would then be able to operate more freely again. So would our exporters.

This won’t happen soon. So far, the ongoing losses to this country from Trump’s fixation on Iran have run into hundreds of millions of dollars. Nuclear-free New Zealand has also lost out in other ways as well. (Under the terms of the 2015 deal with Iran, the risk of nuclear proliferation in the Middle East would have been significantly reduced.) Hopefully, under a Biden administration, something that looks more like “free” trade – ie, the freedom to trade with whom we like – will be restored to us. Now, that would be a “free trade” development worth celebrating.

It has been several years since Valerie June released any new material, but here’s a package of three loosely related tracks – “Stay” Stay Meditation” and “You are I” – that she released last week in one seven minute burst. They mark a definite shift away from her more soulful, bluesy material of yore.

And if you’re looking for new ways to chill…here are two hours of squid movement, with ambient backing music from Krill Waves Radio. Relax, and swim with the fishes.