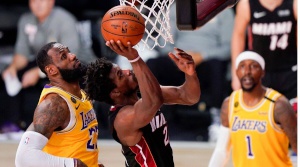 During a pandemic, what role does sport play? That question suddently looks more complicated than it had first seemed. Back during the first lockdown an audience starved for sport had seemed willing to watch any game anywhere featuring a ball and competing teams. But now? Not so much. In the US, the NBA finals – the Lakers with Lebron James, vs the Heat ! – have racked up very poor TV ratings. The ratings for the Stanley Cup NHL finals were down by a whopping 61% compared to 2019.

After a lot of head scratching, a range of “ explanations” have been forthcoming. Maybe the jumbling up of so many of them at the wrong time of year ( the French Open tennis in October?) has been a deterrent. Maybe audiences were turned off by the lack of crowds and atmosphere. Maybe people don’t regard these virtual tournaments as being “real” encounters. Maybe TV ratings have (suddenly) been hit by the rise in streaming. Maybe there were scheduling problems with games two and three of the NBA finals. Maybe in the age of Trump, sport has become too politicised.

None of these reasons have seemed adequate, given the size of the drop off in the audience for elite sporting events. The “ they’re watching it on streaming” explanation is (a) speculation and (b) not particularly credible:

The central problem with this [streaming] theory is that we don’t actually know how many people are doing this — we have to make guesses based on streaming trends and simply give ESPN and the NBA the benefit of the doubt. And this hypothesis doesn’t explain poor ratings for the NFL, which is easily the least streamable of the major sports.

As for the “too politicised” theory – which harks back to athletes not standing for the US national anthem, and to the NBA’s brief political spat with China– none of this seems adequate to explain the huge (45%!) drop off in ratings for game one between the Lakers and the Heat. And besides :

Ratings are down for everything in sports, not just the NBA; it is possible that horse-racing ratings have fallen because of politically outspoken equines, but it does strike one as unlikely.

So what is happening? What the pandemic suggests is that sport can perform its escapist function only when a stable platform of relative normality exists in the rest of life. Normally allows for a willing suspension of disbelief. In this enchanted state, it can seem possible to believe that the outcome of this week’s tussle between hyper-trained athletes over possession of a ball is an existentially crucial moment in one’s life. It can even become possible to care about the outcome this week, and hanker for repeats of the same adrenaline rush next week, and on every weekend thereafter.

But hey. when there is a real existential threat occurring in normal life, the escapism being offered by sport tends to lose its sparkle. Arguably, sport should become even more alluring but on the evidence, that’s not what is happening. Instead, it just looks like… Escapism. The magical illusion drops away. Not only can we live without it, but its consolations can readily seem cheap, even shoddy. And that is mainly because real life- and the virus -is presenting us with a genuine ( and deadly) game of chance. In the current environment, will they catch the ball and score seems to be a less compelling question than will we (and our loved ones) catch the virus ?

Until that underlying anxiety can be resolved, elite sport will struggle to regain its former allure. The same deep anxiety about Covid-19 also partly explains why during lockdown, so many of us didn’t end up learning Spanish or how to play the cello, or any of the other activities that had seemed inviting at the outset. It turned out that the Covid lockdowns weren’t like a holiday, ripe with leisure options. Even after the tentative re-emergence from lockdown, the appearance of leisure has proved almost as hollow as the forms of escapism offered by sport.

And in New Zealand?

That’s one reason why New Zealand will be such an interesting case. So far, New Zealand has been spared much of the daily dread and grief being experienced in other developed countries. We also place an unusual amount of value on our national sport. If anything on the planet should be able to withstand the global effect the pandemic has had on elite sport, it should be All Black rugby, here in New Zealand. A full crowd is expected on Sunday, with some tickets reportedly changing hands at prices between $80 and $200. Contact tracing – in a crowd of 35,000 and with current technology – will be next to impossible, thereby making the case for the Covid Card, which would give more precise data on who has been in the proximity of any human site of infection.

As for the benefits to the hospitality sector, the bookings in Wellington hotels are – unusually – for Bledisloe Cup weekend – “good but not great.” But right now, the sector is feeling grateful for whatever it can get. Less is still something.

Footnote: This summer, there will be other chances to test this country’s commitment to elite sport. January’s ASB tennis classic has been cancelled due (only partly it has been claimed) to quarantine requirements. But cricket tours (including by a team from virus hot spot Pakistan) still will, on present indications, proceed.

Donald Trump is feeling great. Really, really great. The cocktails of drugs he has been taking include doses of the powerful steroid dexamethasone. This meant that he could send out nearly 100 tweets last night. For the rest of us, the prospect of a ’roided up Donald Trump is, frankly, terrifying. The fact sheet issued by Medsafe in New Zealand is not re-assuring – starting with Medsafe’s inability to spell the name of the drug correctly.

But Medsafe does go on to explain what to expect from dexamethasone. It stresses the need for gradual withdrawal. Also, there’s this alarming section:

Patients and/or carers should be warned that potentially severe psychiatric reactions may occur. Symptoms typically emerge within a few days or weeks of starting treatment…. Patients and/or carers should be encouraged to seek medical advice if worrying psychological symptoms develop, especially if depressed mood or suicidal ideation is suspected…. Psychic derangements range from euphoria, insomnia, mood swings, personality changes and severe depression to frank psychotic manifestations.

Bartees Strange may well have been the only black kid in Mustang, Oklahoma who grew up singing Gilbert & Sullivan, thanks mainly to the influence of his mother, a former opera singer.This still doesn’t quite explain the unusual combination of styles ( urban r&b meets hip hop meets indie rock meets industrial noise) that he draws upon, sometimes within the same song. His day job is as an environmental activist for an NGO based in Washington DC.

Earlier this year, Strange broke through with an EP of cover versions of songs by that very whitest of bands, the National. Earlier, Strange had attended a National concert, where he seemed to be the only black person present. As he says, the meticulousness of the National’s arrangements and the deliberate way they delivered their songs reminded him of his early grounding in classical music. His re-imagining of the National’s “Lemonworld” (from their High Violet album) begins at exactly 15 minutes and 30 seconds into this live studio performance and interview. Apologies for the long and irritating two minute intro…When it finally arrives, the interview is informative :

And from his recently released debut album, “Mustang” is a challenging glimpse into his industrial noise/punk band influences :