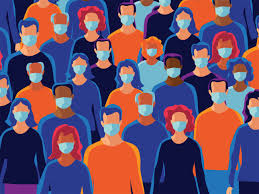 Herd immunity has recently bounced back into the headlines as a tool for managing Covid-19, and as a supposed alternative to lockdowns. In the US, a group of scientists was recently brought together in the town of Great Barrington, Massachusetts by a think tank funded by the Koch brothers. The assembled scientists signed the so called Barrington Declaration, which promotes herd immunity as a rational means of re-opening US public schools and the economy at large. The Declaration has found a receptive ear at the White House where Dr Scott Atlas has become Donald Trump’s most trusted health advisor on the pandemic, and Trump’s main scientific advocate against lockdowns. Atlas is a neurologist, and has no expertise in infectious diseases.

Briefly: a herd immunity strategy would open up the economy and allow the virus to spread unchecked among the young and other groups deemed unlikely to suffer serious effects. Simultaneously, the elderly and those with serious underlying conditions would continue to be isolated, until such time as immunity has developed among the wider population. Sweden has been the poster child of this approach. So far, Sweden has experienced a far higher death rate than its neighbours, and suffered similar economic damage.

The critics of herd immunity – and they include Dr Anthony Fauci – have denounced it as “total nonsense.” (Basically, the claim is that it is morally reprehensible, socially impractical and scientifically illiterate.) The Barrington Declaration is silent for instance, on how isolation would be possible amidst the multi-generational families and crowded housing that are prevalent among poor communities and communities of colour. It also ignores the incidence of serious underlying conditions (eg obesity, diabetes, asthma) among age groups other than the elderly. The following figures are chilling, or should be to any herd immunity advocates. Yes, the over 65s are at greater risk, but infection would jeopardise a very large number of younger people, given the known incidence rates of pre-existing health conditions in the population at large:

Just over half of those at higher risk of developing a serious illness are ages 65 and older (55.2% or 51.1 million adults); however, the remaining 41.4 million adults ages 18-64 are at risk due to an underlying medical condition.

There are steep regional variations in the incidence of risk from Covid-19 infection among those already suffering from obesity, diabetes or asthma :

The share of adults ages 18 and older who have a higher risk of developing a more serious illness varies across the country, ranging from 49.3 percent (West Virginia) to 30 percent (Utah)….

Oh, and a lot of people that a ‘herd immunity’ strategy would expose to the virus simply can’t afford to get sick :

An estimated 5.1 million adults who are at higher risk of getting a serious illness if they become infected with coronavirus are uninsured.

Overall, a major research study into US deaths from Covid-19 between May and August 2020 found that nearly a quarter (22 %) of those deaths occurred among people younger than 65.

At this point, science does not know how lasting the antibodies generated by a Covid-19 infection will prove to be, which is crucial prior knowledge for any morally defensible pursuit of herd immunity. Earlier this week, the New York Times weighed the pros and cons of herd immunity in an article available here. At the same time, an alarmed group of some 80 scientists has signed a declaration of their own denouncing the “herd immunity” approach. Their commentary includes this observation :

Any pandemic management strategy relying upon immunity from natural infections for COVID-19 is flawed. Uncontrolled transmission in younger people risks significant morbidity(3) and mortality across the whole population. In addition to the human cost, this would impact the workforce as a whole and overwhelm the ability of healthcare systems to provide acute and routine care.

Furthermore, there is no evidence for lasting protective immunity to SARS-CoV-2 following natural infection(4) and the endemic transmission that would be the consequence of waning immunity would present a risk to vulnerable populations for the indefinite future. Such a strategy would not end the COVID-19 pandemic but result in recurrent epidemics, as was the case with numerous infectious diseases before the advent of vaccination.

As the NYT article mentions, the WHO has recently been advocating a “third way” between the options of “let it rip” and a reliance on strict lockdowns :

Dr. David Nabarro, a special envoy to the World Health Organization, has urged governments not to resort to lockdowns as the primary method to control the virus. Masks, social distancing, fewer crowds, testing and tracing — these are the ways to control the virus in the long run, he said in an interview. But the lockdowns in the [northern] spring were necessary, he added, as emergency measures to give countries time to put in place strategies to control the virus.

Many people would be sceptical of Nabarro’s contention that masks, social distancing and tracing would be sufficient to prevent community transmission. In the meantime, the unfortunate town of Great Barrington is trying to avoid being associated with herd immunity.

“We are a COVID safe community, we are not tossing off our masks,” said Town Manager Mark Pruhenski. “This Declaration has gained national headlines and has created harmful misperceptions—just as we are doing all we can to protect residents, employees and visitors.”

“We wear masks, keep safe distances as we can in public,” said Selectboard Chair Stephen C. Bannon. [Not the Steve Bannon.] … We have safe social pods with neighbors, family and friends. We are among the lowest risk towns in the state, and we hope to keep it that way,” he said.

Talking about wearing masks in public places… When we finally have the luxury to look back on how New Zealand has handled this pandemic, maybe someone will be able to explain the peculiar hostility shown by both the Ardern government and the Health Ministry alike to the wearing of masks. Masks are STILL only grudgingly being recommended as an optional extra – even after it has been conceded that this virus is routinely transmitted by aerosols (that can float for considerable distances on the air) and not merely by droplets that obligingly fall to the floor within a six foot distance from the person infected.

Week by month, the science has made masks or some other kind of face covering a sensible-to -essential preventative measure. Personally, I liked what Democratic presidential candidate Joe Biden had to say on the subject at a recent town hall meeting in Miami :

“I view wearing this mask as not so much protecting me, but as a patriotic responsibility. All the tough guys say, ‘Oh, I’m not wearing a mask, I’m not afraid.’ Well, be afraid for your husband, your wife, your son, your daughter, your neighbor, your co-worker. That’s who you’re protecting by having this mask on, and it should be viewed as a patriotic duty, to protect those around you.”

Hmmm. Why then, don’t the government/Dr Ashley Bloomfield make the wearing of masks compulsory in public, especially on crowded buses, trains and planes where the sharing of air is inevitable? Instead, it looks as though we are going to be purely reactive – ie, lets wait until we have a major outbreak before we decide masks are essential. Arguably, we should bebpro-actively treating masks as a way to reduce the likelihood of an outbreak spreading in the community. Surely, good habits are worth fostering before they become necessary. As the Russian fisherfolk in Christchurch have just demonstrated, New Zealand remains sufficiently open to the infected outside world that prevention is as important as the cure.

Again, the foot-dragging seems inexplicable. At the outset of the pandemic, the authorities seemed to assume that New Zealanders would be somehow unable to (a) put on masks properly and (b) refrain from fiddling with them. Supposedly, Kiwis could not do one thing (wear masks) without stopping doing the other desirable things like handwashing and social distancing. Hey – in reality, we are willing and able to do all of those things.

Early on, we were also being told that New Zealand would rely on the science from the WHO, and from the Center for Disease Control (CDC) in the US. As long ago as April it was clear that the WHO had (wrongly) assumed that transmission was occurring only between sick people, and not via asymptomatic people :

The World Health Organization has advised people not to use masks unless they are sick, and that advice has up to now been echoed by the United States’ Center for Disease Control and Prevention (CDC). But now the CDC is reviewing that advice after new evidence shows COVID-19 is being transmitted by people who show no symptoms of being sick.

And this seemed significant:

Speaking to media… Director-general of health Dr Ashley Bloomfield said he was following the CDC review “very closely”, hinting that New Zealand may also change its official advice depending on what was decided in the US.

Yet when the CDC came out a few days later and advocated the wearing of masks, Bloomfield chose to ignore it. Over the next few months, the scientific evidence steadily accumulated that aerosols can be a significant mode of transmission, thus re-enforcing the value of masks. A very recent summary of CDC advice on droplets/aerosols can be found here. Also… Best practice elsewhere (eg in Taiwan) has shown that the wearing of masks has been a key part of their success story. Regardless, the local urgings by Otago University epidemiologist Michael Baker – citing Taiwan – that masks should be made mandatory on public transport (and in the likes of airline terminals) has been consistently ignored. As Baker pointed out a couple of days ago, mask wearing remains compulsory in Taiwan on public transport, three months after the country crushed community transmission.

Belatedly, the government and Health Ministry did concede that masks were a good idea. In late August masks or some form of facial covering on public transport briefly became mandatory at stage two (and above) levels of lockdown. But once we had moved back down the lockdown levels, New Zealand once again – to Baker’s evident dismay – made the practice purely voluntary on public transport and in other public spaces where social distancing is difficult. Instead of going to level one – which fosters complacency that everything is back to normal in an infected world- Baker has recommended a mask wearing interim 1.5 level, as a useful reminder to everyone that the virus remains a threat.

Yes, we’ve managed the pandemic extremely well. But that makes it all the more puzzling just why the New Zealand authorities have been – and continue to be – so stubbornly out of step with international best practice on this subject. On the value of masks, we continue to operate at Donald Trump levels of denial.