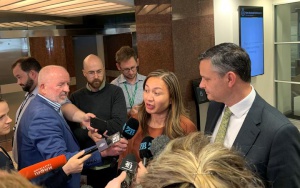 WThe Good Fight TV series dropped us into a world where Hillary Clinton is the US President and Elizabeth Warren and Merrick Garland are Supreme Court justices, where rain forests are being saved and polar bears are coming back from extinction. Yet alarmingly, people keep on having these bad dreams about Donald Trump being the President…

Here at home, the “what ifs” include… Imagine if there had been no Springbok tour and Robert Muldoon had lost the 1981 election, Rogernomics would never have happened, and we would just be having bad dreams where crazy people (in the Labour Party!) privatised our banking, transport and telecommunication systems, and the income of poor people got cut so that wealthy people could get tax cuts. Crazy dream stuff like that.

Quite a few of the big “what ifs” in our political history feature Winston Peters. Since election night, Peters has slipped away quietly into the darkness. So far, there has been only passing recognition of how large a presence he’d been on our political stage for the past four decades. A natural conservative, Peters not once but twice – in 1996 and 2017 – put parties of the right and of the left into government. In 1993, his formation of New Zealand First created a populist vehicle for many people (former Labour and National voters alike) who felt left behind by the two major parties, during their headlong embrace of market liberalism.

Over the course of the seemingly endless Winebox saga of the early to mid-1990s, Peters pursuit of tax practices by the rich and the powerful cemented in his image as a scourge of the Establishment, and champion of the underdog. Yet at the other end of the spectrum, Peters also twice – under Helen Clark and Jacinda Ardern – served pretty ably as this country’s Foreign Minister. More so than many who have filled that role, Peters seemed entirely at ease on the diplomatic circuit.

Since 2017, he managed to maintain our trade relationship with China, while putting some much-needed distance between New Zealand and Beijing on diplomatic and defence issues. (Weirdly, successive leaders of the National Party had fallen heavily for China’s Communist Party.) While part of a government led by the centre-left, Peters brought New Zealand much closer to the defence posture in the Pacific being promoted by the conservative government in Canberra. For much of Peters’ career in domestic politics, Jim Anderton was his maverick counterpart on the left. Both left behind signature achievements: Kiwibank for Anderton, the Gold Card for Peters.

Regardless, Peters’ career was also an exercise in the “what if” game of what might have been. If only he’d been more of a team player. If only he’d been willing to endure people like Ruth Richardson and swallow the neo-liberal Kool-Aid. If only he’d been less inclined to dog whistle to reactionaries and scapegoat (a) Maori radicals at home and (b) immigrants, refugees, asylum seekers and investors from abroad. If only he’d played the game, so people said, he could have been leader of the National Party, and our first Maori Prime Minister. All of which would have required him to be a different person.

So finally, what went wrong for Peters, and for New Zealand First? Ironically, you could say it came down to three strikes and he was out. There was another party donations scandal, and secondly there was the vast unpopularity of his colleague Shane Jones. Finally, and most notably… There was the chronic curse of being a junior partner in an MMP government. After the 2017 election, NZF took all the textbook steps to protect its identity and project its brand. As promised, it was a highly visible handbrake on its coalition partners, and it won big policy gains on defence spending and with the Provincial Growth Fund.

None of this proved to be enough to make NZF seem essential. When put up against the vast popularity of Jacinda Ardern, Peters’ brand of old school populism looked like a relic of a bygone era. In the dying days of Election 2020, he was reduced to railing against the Ardern government he had put in office – but this time, the resentful weren’t there for him in sufficient numbers.

Still… Peters’ legacy extends beyond the Gold Card, and some of it would be unwelcome to him. Act Party leader David Seymour for instance, is the closest thing to a Peters populist in the current Parliament, and – as it did on previous occasions with Peters – National might well be wondering whether Seymour will be a team player or mount a takeover bid. The Greens have the most to learn from Peters’ demise. Fly close to your senior partner under MMP, and you will get burned. This year, the Greens barely survived MMP. It did so at the 11th hour by re-discovering its old mojo as an outsider party of principle. (That’s certainly how Chloe Swarbrick won Auckland Central.) That stance involves running against the party in power – and not volunteering to be a designated driver to destinations not of its choosing.

In future, the lesson the Greens should learn from Peters would be – go into the government tent at your peril. Because no amount of incremental policy gains will be enough to save you, next time around. Hey, “what if” the Greens chose to refuse to enter into any kind of arrangement with Labour? That’s an alternative reality worth contemplating.

Capital Follies
First the good news. Wellington’s beloved Public Library, an amenity formerly used by a million people a year, is to be saved and earthquake strengthened. This decision came in the wake of a typically bizarre Council “consultation” process that invited Wellingtonians to choose between (a) an inflated cost ( circa $200 million) for the earthquake remediation, later reduced (after the vote) to only $161 million and (b) a demolition- and-rebuild option with a price tag that omitted one of the key elements – base isolation – necessary in any truly earthquake-safeguarded new building.

So after putting a range of options out for consultation, the Council decided to scrap the results – essentially because they’d been based on (its own) inaccurate costings. Meaning : the Council chose the second favourite option because it decided the demolition-and-rebuild option had only come in first on the grounds of its (untrue) cheaper cost. Since the Council could now ( hopefully) remediate the building more cheaply, then it could ignore the results of the consultation, go back to square one, and pursue the remediation option instead. Hurrah for democracy. Full details on Wellington Scoop.

And when will Wellington have a fully functioning public library once again? The current plan envisages a re-opening in…mid 2025. Hmm. In other words, the US aims to put humans back on the Moon in less time than it will take for the Council to repair the city’s library building – which, lest we forget, suffered no damage in either the Christchurch or Kaikoura earthquakes.

Footnote: Its been quite a week in the capital True to form, Wellington’s winds may capsize Kiwirail’s plans for safely docking its planned new mega-ferries. Also, the city’s -crippled-by-consultants bus system will cost more from February 2021 onwards. And reportedly.
the capital’s Courtenay Place /Cuba St entertainment district is the most violent place in the country to go wandering around in the small hours of the weekend. For its residents, this place can sometimes feel like the cruellest little capital in the world.

At Home with Ela Minus
Talking of dreams and nightmares…in recent months the Colombian singer/electronic musician Ela Minus has been releasing music videos that manage to convey some of the emotional dislocations of life under lockdown…Staying too long inside a darkened apartment? This track “Dominque” is about what happens to your brain when the difference between 7am and 7pm gets seriously scrambled :

Her other recent dance single “El Cielo No Es De Nadie” does an even better job of conveying what dislocation in a small space feels like: