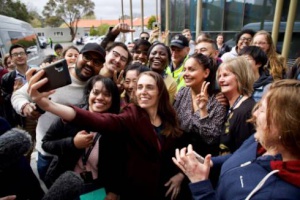 On the eve of Election Day, Judith Collins can claim that she has done exactly what she was chosen to do: namely, she looks like she’ll save some of National’s caucus furniture. The party may currently be polling in the low 30s, but under Simon Bridges or Todd Muller it seems safe to assume that it would have been down ten points lower right now, and close to the rock bottom hit by the party in 2002.

Mind you, it has been a rough last week for Collins. In last night’s debate, her scaremongering attempts at portraying Jacinda Ardern as the helpless pawn of the Greens fell flat as a pancake. Ardern hit the obvious response button: why then, wouldn’t Collins be equally captive to the Act Party? To drive home Ardern’s point, both Act and the Greens were polling last night at exactly the same 8% level so the logic would cut both ways. Or in fact, not at all.

As for Ardern’s hardline stance on the Greens’ wealth tax, this gambit had two separate aims. By strongly rejecting the “tax the rich” approach, Ardern was trying (a) to keep a hold of those moderate National voters who had strayed across to Labour for its handling of the pandemic, and (b) to annoy enough of the radical left on a social justice/inequality issue that they would head back on over to those milquetoast Greens and ensure they made it back into Parliament. It made the Greens look radical again, which is no mean feat.

Andrew Campbell, Ardern’s chief press secretary, used to work for the Greens. Presumably, he backed Ardern’s consistent messaging on the wealth tax. Even though Labour has not gifted Auckland Central to the Greens – far from it, it has poured resources behind its candidate Helen White – Labour has had a few party vote percentage points to spare. Looking as though it was bullying the Greens (on this issue especially) was an economical way for Ardern to spread the centre -vote around to maximum effect.

The other clunker this week was of course, Collins inexplicable decision to dump on overweight voters. (Try as she might, National was never going to trump Act on going to extremes about personal responsibility.) And if, against the science, you’re hellbent on decrying obesity as a personal “weakness” …What pray, are the implications for your allegedly “strong” team, given that your deputy is known for being a little on the chunky side? Gerry Brownlee, a strength or a weakness? Clearly, Collins herself seems to be in two minds on that one.

So… At the end of a campaign where Collins has invoked religion more than once, it is worth asking: who among the National flock will be saved, and who will voters be casting into the outer darkness? National goes into this election top heavy with electorate MPs. The likely decline in its share of the party vote – it won a heady 44.45% in 2017 compared to Labour’s 36.89% – could mean that (theoretically) none of its list MPs could make it back into Parliament. In reality though, the swing to Labour will carry over from the party vote into the electorate contests as well. So in which electorates does Labour stand the best chance of toppling a sitting National MP?

The possible hit list can be tabulated – as Henry Cooke has done on Stuff – by taking as a rough starting point, all those seats where National currently holds a 5,000 vote majority or less. That creates this initial list of the vulnerable that includes : Hutt South ( Chris Bishop) Northcote ( (Dan Bidois) Auckland Central, Whanganui ( Harete Hipango) Tukituki ( Lawrence Yule) , Wairarapa, Nelson( Nick Smith) and East Coast. Currently, Auckland Central ,Wairarapa and the East Coast are represented by National MPs who will be retiring at this election.

Elsewhere… Boundary changes have helped National in Maungakiekie and normally, the new seat of Takanini would look very favourable for National. Yet given the dire state of the party’s fortunes, neither seat can be taken for granted. Incidentally, a poll in August in the Northland seat– which was New Zealand First’s best shot at staying in Parliament – had Shane Jones polling a lowly 15%, well behind National’s Matt King on 46% and Labour’s Willow Jean Prime on 31%. So….the myth of Shane Jones as being this ordinary bloke who magically speaks the language of middle New Zealand looks like being shot to pieces once again. Jones seems likely to be leaving Parliament with his perfect track record still intact, of never having won an electoral contest.

Another way of looking at the marginal electorate seats is via the anecdotal/media evidence of where Labour has been pouring in its resources into what it apparently regards as winnable seats. Once again, Nelson, Northcote, Whanganui, Wairarapa and Hutt South feature prominently.

Back when Whanganui’s boundaries looked more like the city boundaries and the River City was a railways workshop town, this was a safe Labour seat. The extension of the boundaries into the rural surrounds – this year’s boundary changes take it even further up, north of Stratford – and the personal following of former MP Chester Borrows, made this a safe National seat. However, sitting National MP Harete Hipango has done a pretty good job of squandering those advantages. Her unfounded allegations about the recent abortion law changes, and her recent manufacturing of a false Ardern quote about dairy farmers both may have had an intended audience, but they have motivated Labour to mobilise strongly against an incumbent who has shown less crossover appeal than Borrows.

Boundary changes that moved his Brightwater stronghold out of the electorate will hurt Nick Smith. He also faces a strong Labour candidate in Rachel Boyack, and the absence this time of the major spoiler role played in 2017 by the Greens – who had a popular local candidate who scored over 7, 000 votes – all add up to pretty grim prospects for National, and Smith.

This will be interesting. Chris Bishop is one of National brightest young talents, and his hardworking presence in the electorate saw him wrest the seat from Labour in 2017 after Trevor Mallard had vacated it. A Todd Muller lieutenant in the Simon Bridges coup, Bishop (and colleague Nicola Willis) got promoted by Judith Collins. Bishop has got significant gains for the party on transport issues, and he won a prominent place for the mooted local Petone to Grenada link road in National’s infrastructural planning

But…this year, the tide is out for National, and Bishop has given every indication of running as much as a local MP as National’s loyal standard bearer. In her recent visit to the Wellington region, Collins visited Ohariu, but not ( this time) Hutt South.

There was also this, as pointed out by Tova O’Brien on Newshub :

Last week Bishop liked a tweet bagging Collins after she prayed in a church before casting her vote in front of the media. It’s not something they’ve discussed. The tweet, by Sean Plunket, said: “Jim Bolger was the most seriously religious PM I ever encountered. Not once did I remember him using his attendance at church for a photo op.” “It’s totally ridiculous,” Collins said. “It’s my fat fingers,” Bishop added.

Bishop has a high 7th place on the party list, so National clearly hopes not to lose him, whatever his fate may be in Hutt South. (He us up against Labour list MP Ginny Andersen.) Tomorrow night, the Hutt South outcome will indicate (a) whether a local profile can overcome a national trend (b) the actual strength of Labour’s game on the ground and (c) the extent to which National’s strength in the electorates may be at the expense of its rising stars on the list. Every which way, Hutt South will be a nail biter.

For what its worth, my hunch is that Bishop will hold on, based on that local following he has earned. The other possible ‘against the polling trend ?’seat worth watching will be Northcote. It would be no surprise if it flipped to Labour from National’s Dan Bidois, who won the seat in a 2018 by-election after Jonathan Coleman resigned. Yet in this closely contested seat – Labour has poured a lot of resources into it and plainly regards it as winnable – Bidois may end up making it much more of a contest than the nationwide polling would suggest.

Footnote: One word we are going to hear a lot of during the next 48 hours is “ overhang.” When a party’s electorate victories exceed its party vote percentage, the electorate wins are treated as an “overhang” and Parliament expands in size accordingly. Or to put that another way, if a party’s share of the party vote entitles it to fewer seats than it won in the electorate contests, then the overhang kicks in accordingly. This happened in 2005, 2008 and 2011, The overhang is not usually substantial, because what happens in the electorate vote tends to mirror pretty closely what happens with the party vote.

Finally… Over the next fortnight, the democratic process may offer us a rare double shot of happiness. A victory for the centre left tomorrow night…then on November 3rd the likely ending of the Trump nightmare. Winning could become a game changer for the left, which in recent years has made an art form out of losing with honour. They go low, we go high, and they win. Maybe not this time. Enjoy the night.

What we all need at this point is Dolly Parton. She’s been the great unifying figure in American popular culture. Meaning : she is the only entertainer whose general awesomeness can be agreed on by Democrats and Republicans, East Coast, West Coast and Heartland, militia followers and antifa supporters alike. Everyone loves Dolly Parton. Plus she can do amazing stuff with her nails, as she demonstrates in this great 1980s clip with soul legend Patti LaBelle.