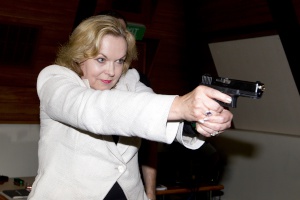 In the wake of Judith Collins descent into negative politicking, the real question has to be – did she slip, or did she jump? Was it tiredness, or desperation, or both? As Werewolf has been arguing from the outset, Collins’ campaign has been almost entirely about damage limitation, rather than about any serious attempt to cross the political divide and win the wider arguments on (a) managing the virus or (b) managing the economy.

Nice Collins was a pitch to moderate former National voters to come back home. That attempt has run its course. The tax cuts offer (a “come home” pitch to the hardliners who have drifted off to the Act Party) got blunted when Finance spokesperson Paul Goldsmith couldn’t do his sums properly. Nasty Collins is now appealing to the dregs of the talkback radio/social media audience. In the process, her brief flirtation with conservative Christianity seems to be over. When you’re reduced to calling your opponent a “liar” on specious grounds, there’s not much room left for “Judge not, lest yourself be judged.”

Amusingly, Collins and Winston Peters appear to be spending their final days as significant political players locked in a battle with each other for much the same group of reactionary undecideds. In the past 48 hours, both have been stoking fears about a potential government headed by Labour and the Greens. That’s because as well all know in our hearts, Jacinda Ardern, Grant Robertson and James Shaw are really the Lenin, Stalin and Trotsky of today’s centre-left.

Give unbridled power to that trio and the kulaks of rural/provincial New Zealand will soon be being hauled off to the gulags, or worse. First they made farmers fence their waterways. Then they asked them to improve their water quality by 2025. Then they gave them notice that fossil fuels might be phased out in 30 years time. It has been just awful.

It isn’t just farmers in the gun, either. From Herne Bay to Remuera, the tycoon sector is now all a -tremble at the Greens heinous plan to tax any income earned above one million dollars by an extra one per cent, in order to help the country pull through the Covid-19 recession. Plainly, capitalism as we know it could not survive such an outrage. Oh sure, Jacinda Ardern is saying it will never happen. But sometimes at 3am, you can’t help waking in the night and peeking through the blinds to see if James Shaw is standing in the driveway.

Just to think. Come Sunday morning, we may be waking up to a New Zealand where Winston Peters and Judith Collins are no longer a significant part of this country’s political furniture. Only four more sleeps until then.

Footnote: Collins never has been a centrist. As Auckland University political scientist Jennifer Curtin has pointed out, Collins praised Don Brash’s Orewa speech for its decisiveness, and was routinely at odds with John Key’s brand of moderate pragmatism :

In 2008, Key was intent on pulling the party more towards the centre, but Collins was sceptical of the argument that winning elections meant winning over median voters. Citing the success of Thatcher, she believed shoring up the base and delivering to that base mattered more. For Collins, centrism is an excuse to do nothing and stand for nothing.

Right. So her current shout outs to the right wing base are nothing new. It is her happy place. Basically, Collins has always stood for a warmed over combo of Thatcherite policies: market liberalism, tough love on welfare and punitive on law and order issues. All of which are deeply at odds with 21st century socio-economic needs and realities. Thankfully, most of the voting public seem to recognise that Collins (and the divisions she represents) belong to the past.

There have long been concerns that an increasingly desperate US President Donald Trump would spring an “October surprise” – a military invasion, a domestic insurgency, the arrest of political opponents – in order to transform a landscape that could otherwise end his political career. One foreign policy surprise entirely possible before Election Day would be Saudi Arabia’s announcement of diplomatic ties with Israel. The covert co-operation between the two countries – they are known to share intelligence information – could soon become official, and in time to allow Trump to claim that he, Trump, has brought peace to the Middle East.
For the Palestinians of course, this would be the peace of the grave. In Gaza, there has been recent reports by UN officials of people having to rummage through garbage for food. The real target of Saudi/Israeli collusion would be Iran. Any such announcement would not only help Trump, and but would present an incoming President Joseph Biden with something of a fait accompli. Namely: the Palestinians sold out, the Middle East tyrannies ( Egypt, Saudi Arabia, the UAE) lining up with Israel, against Iran. The new leadership in Oman and Kuwait would be expected to fall into line. In the face of such a pre-emptive move, Biden would be left unable to restrain the team of Benjamin Netanyahu and Crown Prince Salman, even if he wanted to.

The extensive details contained in this FBI affidavit filed against the US militia group that planned to kidnap Michigan governor Gretchen Whitmer from her vacation home makes for fascinating reading. The plot seems to have been a classic example of people who feel powerless talking each other up into an escalating cycle of violent responses. Plainly, these guys felt thrilled just to be saying this tough guy stuff out loud, and putting all the quasi-military options on the table. These options included : kidnapping, blowing up bridges to divert the cops, walking up to Whitmer’s door and “capping” (i.e. shooting) her. Sending her a “cake” (i.e. a bomb) in the mail, and/or sending “ cupcakes” to a whole lot of other people that the plotters didn’t like. Yeah, dude! Let’s do it!
Some of the detail seems pathetic. The group leader would collect cellphones before each meeting, so that the proceedings couldn’t be monitored, even though an undercover FBI agent wired for sound was sitting amongst them, recording it all. I liked the moment when one guy offered to paint his boat black, if that would help the surveillance effort. Unfortunately though, these guys were not merely a joke.