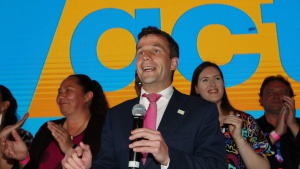 As it licks its wounds, let’s hope the National Party can still find time to look back with some pride at what it has achieved in Epsom. The Act Party’s nationwide success on Saturday night has been a tribute to National’s foresight, and to its ability to pick winners. Others would have looked at the dying remnants of the old Act Party and written it off. Yet National needed an MMP partner and it saw the potential where no-one else did. And so it re-grew the Act Party in a petri dish in Epsom, and carefully nurtured it back to life.

Oh, there were difficult years, under John Banks. All up though, Act’s recent success has been an inspirational story of just what (a) a large amount of central planning (b) the protection of a fragile start-up from true competition and (c) generous lashings of external support can deliver en route to self sufficiency. No money was spared in the relaunching of Act, and on Saturday night that investment finally paid off.

Of course, the Act Party has grown up to renounce all the things that made its own success possible but hey, isn’t that what kids are like. They rebel. Do they thank their parents? Only belatedly, if at all. Act really seems to believe that it pulled itself up by its own bootstraps and it can therefore expect everyone else to do what it obviously didn’t do itself. But still… National is gambling that their creation will eventually come back home in Election 2023, and dutifully play its role in the family business. Maybe.

In the meantime, Saturday night really wasn’t much fun for National. It used to be that safe behind its protected walls in Epsom, Act would rack up a huge tally in the electorate vote while National hoovered up all the party vote. At the same time, Act would do absolutely zilch everywhere else in the country, on the electorate and party votes alike. Not anymore. Act may have won only 696 party votes in Epsom in 2017, but it won a hefty 3,607 party votes there this time, at National’s expense.

That pattern was repeated. Famously, Act won 190,139 party votes across the country last Saturday night, up from only 13,075 party votes only three years ago. It also won a sizeable number of votes in many of the nation’s electorate contests. I can’t find any single rural or provincial electorate where a “double tick yellow” approach was decisive in tipping the seat from National to Labour, but Act’s presence did magnify the size of the defeats that National suffered in so many of its traditional strongholds.

If, against the odds, Act’s support still holds up over the next three years….this will be problematic for National, given that 2023 will be a more closely fought election. Starting from now, National will need to actively combat the current level of vote splitting on the centre right, even within the electorate contests. Otherwise, there is a risk that Act will not only take over the family car, but will drive it at a pace that’s likely to endanger everyone on board the centre-right project.

The same process occurred all over the country. In heartland Taranaki-King Country, Act won 1,966 electorate votes and 4,043 party votes this time. In 2017, Act didn’t stand an electorate candidate and managed to win only 231 party votes. Again, the collapse in National’s party vote in this classic rural seat was striking – from 21,466 in 2017 to only 12,806 this time. Even in seats where it didn’t stand an electorate candidate this year, Act‘s haul in party votes was impressive: in Invercargill, it won 3,470 party votes this year, compared to only 95 votes in 2017. All of that came off National.

So for now at least, the Act Party has established a presence nationwide. Presumably, it will continue to preach its gospel of self-reliance. Perhaps National can take Act at its word and cut off its allowance in Epsom. Because nationwide, National surely cannot continue to subsidise a political project that has just cannibalised its own support base. To repeat: from here until 2023, genuine policy competition and rivalry needs to break out on the centre-right of politics. Otherwise, Act will continue to eat National’s lunch. Yes, that may be the price of growing an MMP partner – but does National really want to define its own brand in future as the proud sponsor of Act’s radical policies of austerity? It is hard to see how National can look like it is in control of its protégé. Well before 2023, that is going to be a problem.

For Whom the Polls Toll

Uh oh. This week. Donald Trump has been making up ground in two states – Florida and Pennsylvania – that are crucial to the US election outcome. Almost every scenario for a Trump victory depends on him winning Florida. This week, Trump has cut Joe Biden’s lead in Florida to a single point amid signs that the election is tightening nationwide. In Pennsylvania and North Carolina, the Republican voter registration drive has recently been outperforming the Democratic Party, and in Pennsylvania, the Biden lead in the state is decreasing. Over the past week, it has shrunk into margin of error territory.

On the upside there is still a significant gender divide nationwide: Trump’s gains among white male working class voters have been countered (somewhat) by the President’s ongoing unpopularity among suburban female voters, who have shifted against him since 2016.

Of course, single polls (or a single week’s polls) are not definitive – but two weeks out from election day, the polls are signalling that the momentum may be shifting to Trump. The final debate in Nashville ( Thursday US time, Friday NZ time) offers Biden a chance to regain that momentum.

Sons of Their Father

Finally, here’s a song about becoming your own sweet self regardless of what the people who made you wanted you to be. Its from the 1970s, back when Milton Friedman was just finding his mojo…

Molded, I was folded, I was preform-packed
Commanded, I was branded in a plastic vac’
Surrounded and confounded by statistic facts

Son of my father !

But on Saturday night, the scene down at Act Party HQ probably looked more like this: