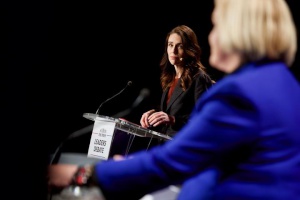 It really hasn’t been a good week for Judith Collins to be wheeling out her Little Me impression of Donald Trump, yet the similarities have been striking. There’s been (a) the need to project an image of strength above all else (b) the interruption laden, mockery-laced debating style (c) the making of policy on the hoof (d) the tendency for the rest of the National “team” to learn about new policy after Collins has announced it (e) the lip service to Covid safety precautions amid passionate declarations about the overwhelming need to re-open the economy… And last but not least (f) the repeated, unlikely expressions of religiosity. Unlikely because Trump and Collins had spent most of their lives without ever seeming beforehand to be the natural champions of the religious right.

Trump’s current position on abortion though, does happen to be entirely consistent with the anti-abortion stance held by conservative religious voters, for whom the abortion issue is of over-riding importance. Collins may have voted against same sex marriage, but she is pro-choice on abortion. So a few days ago, when Collins ensured she would be photographed while kneeling in prayer, the audience for that gesture would seem vanishingly small. How many Christians in favour of liberalising our abortion laws are still undecided voters ? Not many, surely. Or is Collins hoping that conservative Christians won’t realise how she actually cast her conscience vote on abortion, back in March?

What Collins is good at is virtue signalling. She’s against Big City politicking in Auckland. So she’s going to have an inquiry to look into it. She’s critical of border security policy. So she’s going to set up a new bureaucracy to look into it. It will apparently, be modelled on the CERA bureaucracy created in the wake of the earthquakes in Christchurch. (Collins might even get Gerry Brownlee to set it up, because that worked so well last time.) She’s on your side. She’s on God’s side. She’s on the side of small business. She gets it. Even better than Donald Trump gets Covid-19.

So it goes. She doesn’t get wage subsidies that save jobs (because we can’t keep on paying them) but she’s against losing any jobs at all in say, the tourism sector. She’s for the tourism sector. She gets it. She’s for women, but against giving minimum wage increases to women working in low paid jobs. She’s against lockdowns that shut down economic activity, but she’s only in favour of lifting them when that can be done “safely,” whatever that means. Hey, Collins is in favour of safety. For you, for your family and – it would seem – for your congregation.

Footnote One: Probably, Collins liberal position on abortion would have more in common with the Jewish community than with the Christian community. That’s according to how this issue has been playing out during the current election campaign in the US:

Across the country, as a wave of anti-abortion legislation reinvigorates the fight over reproductive rights, Jewish religious leaders, activists and women are speaking out in favor of a woman’s right to choose, buoyed by their faith. It’s not just that the U.S. shouldn’t be deriving law from poetic [Biblical] language, [Rabbi Danya] Ruttenberg said. It’s that the Jewish tradition has a distinctly different reading of the same texts. While conservative Christians use the Bible to argue that a fetus represents a human life, which makes abortion murder, Jews don’t believe that fetuses have souls and, therefore, terminating a pregnancy is no crime.

Footnote Two: Apparently in order to avoid offending either (a) the rainbow community aor (b) conservative religious opinion, National has declined comment on whether it supports Labour’s plans to ban so called “conversion therapy” – a gamut of practices that use force to change gender identity. Act, normally a reliable defender of individual rights has chosen to sit on the fence this time. Act says that it doesn’t support conversion therapy, but is not in favour of banning it. To Act, it would seem to be your choice whether you have your gender identity infringed upon, by force.

Another week, another debate

Last night’s debate was between two people called “Jacinda” and “Judith” who must be close personal friends or family members of the moderators and analysts.Too bad I missed the “Bill” vs “Jacinda “ debate in 2017, and the“John” vs “David” debates in 2014, not to mention the “John” vs “Phil” debates of 2011. Or is it only female politicians who lack surnames? The debate was judged by many analysts to have been “feisty.” Can male politicians be “feisty”? I know that debates between men can become “heated.” Women though can be such feisty creatures when they let themselves get worked up about something or other.

I won’t try to offer a blow by blow replay of last night’s exchanges. I’m not an undecided voter, and the odds are that neither are you. But elsewhere, last night’s political events did offer a pretty compelling vision of what National’s plans to cut red tape, scrap environmental regulations, streamline building permits, reduce the capacity for community resistance to business projects and reform the Resource Management Act might look like. All those things are happening right now in Indonesia, As here, they’re being done in the name of creating jobs and attracting foreign investment.

Al Jazeera carried a story last night about the street protests breaking out in Indonesia against this so called “Omnibus Bill” which will scrap or amend 73 existing environmental and labour laws. The summary by the Jakarta Post of what this will entail really is the stuff of nightmares. It is also what the National Party would dream of doing with its reform of the RMA, given half the chance. Do some of these aims and intentions mentioned by the Jakarta Post sound familiar?

The omnibus bill on job creation significantly relaxes environmental standards for business activities that require an environmental impact analysis [known as an Amdal] … The criteria includes changes in the natural landscape, resource exploitation, pollution, socio-cultural impact, conservation and cultural heritage, security risks, plants and animals, among others.. Furthermore, the people who live in surrounding areas of business activities that require an Amdal would no longer be able to appeal the document…Environmental experts will also no longer be involved in environmental impact analysis, the omnibus bill reveals. The Amdal assessment committees, which comprise the environment agency, related technical institutions, environment and technical experts, environmental organizations and public representatives, are revoked in the draft bill..

This is the direction in which National would like to travel on RMA reform, if voters gave it the opportunity.

Footnote: Last night and in line with her usual tendency to play the grievance card, Collins criticised Ardern for depicting National’s temporary tax cuts as a short term “sugar hit” to the economy. Households not on Ardern’s salary, Collins said, would welcome the extra money. Right. But households have also learned from bitter experience that any back pocket gains from tax cuts will inevitably see essential services rise in cost, and/or be scrapped entirely.

As Ardern reminded us last night, National can’t be trusted to do its sums properly. Its alternative budget contains an $8 billion hole. The promised round of temporary tax cuts would go disproportionately to those least in need, and would be clawed back in 16 months time in what would then look like a tax increase. Come early 2022, would National really enact a tax increase, or would it be more likely to make further cuts to public services? Even taking National’s current sums at faced value, considerable doubt exists as to whether there would be sufficient funds held in reserve – after the splurging on tax cuts – to meet the fresh government spending required by any further deterioration in the pandemic situation.

Finally, the thinking behind the tax cuts surely belongs to a past era. Would people really be just as ready to go out and spend in retail outlets as they did in the carefree days of yore? Chances are, they would not. So even the ‘sugar hit’ to the retail economy would be less than expected. Much of the money from tax cuts would be saved (not spent) by a public justifiably concerned about its future security. Especially if it has put back in power a National Party that (throughout 2020) has seemed willing to gamble with public safety in order to generate economic activity.

Farmers, Hard Done By ( a series)

For donkey’s years, politicians have been exploiting the sense of grievance felt by farmers. In the early 1930s, Georgia governor Eugene Talmadge made a point of using popular country musicians to communicate just how much he was on side with rural sentiment. Oh, Talmadge was also keen on promoting policies of white supremacy. Doesn’t this sound just a wee bit Trumpian?

‘Talmadge} was also an “admitted flogger and racial demagogue who presided over a Klan-ridden regime”… He was criticized for paying himself and family members more than $40,000 in salaries and expenses, and using department funds to make trips to the Kentucky Derby. Accused of “stealing” $20,000 in order to raise the price of hogs, Talmadge told one group of farmers, “Sure, I stole it! But I stole it for you.” The State House declined requests to impeach Talmadge but agreed to sue him to recover state funds spent on the hog price manipulation scheme.

So…from the Talmadge campaign trail in 1934, here’s Fiddlin’ John Carson and his sister Moonshine Kate, with their plaintive version of “Taxes On The Farmer Feeds Us All…”

In the early 1970s, Ry Cooder revived Carson’s song on his Into the Purple Valley album. Cooder’s version also struck a chord in the Netherlands. Judging by this effort, farming’s sense of grievance is pretty universal: