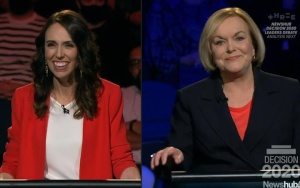 Political debates have dominated the week’s campaign cycle, here and elsewhere. Routinely, leaders’ debates ( and polls) are the roadside diners and comfort stops on the otherwise featureless landscape of an election campaign. They’re useful punctuation points in the campaign narrative. And when I say “useful” I mean useful mainly to the media – who provide the ringmasters and much of the blow by blow commentary on social media. They also serve as the aftermatch analysts who get to rate the contestants on how perkily they have responded to the prods that have just been applied to their personas. RNZ’s Wednesday night headline: “Jacinda Ardern more assertive, but Judith Collins’ one-liners won the night” perfectly conveyed the game-show nature of the evening’s main event.

For the record, a capacity for one liners – those pre-rehearsed “zingers” and campaign trail chestnuts – are not be confused with an ability to deal with the pandemic or manage a fair and competent response to the Covid-19 recession. Hate to be a killjoy, but the policies being batted around for applause lines have a real impact on peoples’ lives. Only those comfortably employed above the average wage can enjoy the luxury of treating policy options as entertainment fodder.

I know, leaders’ debates are not Woodward/Bernstein territory. When Jacinda Ardern tried to provide context for one of her answers, moderator Patrick Gower chided her for bringing up the past. Bor-ing. Sure. But the commentary section on leaders debates is a broad church. It also provides room for curmudgeons to tsk tsk about the lack of content. All part of the same show.

We know already that such debates don’t shift voter preferences. Going into the first Biden vs Trump, a Monmouth poll showed that a whopping 94% of respondents had already made up their minds. Its fun, right? As one RNZ analyst said, Judith Collins looked like she was having fun. Were you? IMO, Collins’ sense of fun looks canned and is remarkably un-infectious. Guess I should lighten up.

Basically, the fight night atmosphere of a leaders’ debate provides the already committed with an opportunity to root for their team, and to hiss the opposition. Nothing changes. On to the next debate, the sponsors are waiting. One of the takeaways from the Trump vs Biden debate was that the aftermath polling showed Biden winning the debate among respondents by seven to ten points – which is exactly the same margin he held over Trump going into the debate. As Paul Simon put it, a man sees what he wants to see and disregards the rest.

One of the weirdest aspects of this week’s phase of the election campaign was the decision by National Party leader Judith Collins to bring her Christian beliefs to the fore. This was highly unusual. By and large, New Zealanders prefer to keep their politics secular. They don’t like to see the political stage being used as a pulpit. They rather tend to associate any sign of religiosity with American tele-evangelists and the Taliban.

Yet Collins chose to highlight her religious beliefs this week, more than once. At a Southland campaign meeting Collins was asked about the criticisms contained in Nicky Hager’s books of her role in the Oravida scandal, and of her former associations with the Whale Oil blogger Cameron Slater. In reply, Collins indicated that Hager would one day have to atone to “ his Maker.” On state radio, Collins defended and repeated the same message. Instead of addressing the criticisms, Collins appeared to be defining them as being inherently sinful. Out of the blue during the second leaders debate, Collins described herself as a Christian and feminist.

To repeat : this is unusual behaviour. Previous leaders of the National Party were known to hold religious beliefs – e.g. Simon Bridges, Bill English, Jenny Shipley and Jim Bolger – but they rarely mentioned them, and didn’t wheel them out for political advantage. Shipley was the daughter of a Presbyterian Minister. But as then-US ambassador Josiah Beeman noted in a diplomatic cable released by Wikileaks, her Christian views were important to her, but she was disinclined to talk about them in public.

Similarly, Bolger was a Catholic, but my attempts to explore those views on the 1990 campaign trail were rebuffed with the amused comment:“ Jimmy Carter got into a lot of trouble discussing this sort of thing. I don’t intend to do likewise.” In the 1980s, Bolger’s sister headed the Society for the Protection of the Unborn Child, but this link came to light only after an Operation Rescue anti-abortion activist bragged about it to a journalist.

Cynics of course, might attribute Collins’ sudden revelations about her Christian faith to a desire to prevent some of National’s support bleeding off to the Christian conservative parties – much as some of National’s economic conservatives have already gone over to the Act Party. If so, it would be worth reminding any religiously motivated voters that back in March, Collins cast her conscience vote in Parliament in support of the liberalisation of our abortion laws. As she says, she’s also a feminist.

As a pro-choice advocate, Collins is not only unlike English and Bridges, but unlike most of the senior members of her current caucus. Gerry Brownlee, Paul Goldsmith, Todd Muller, Michael Woodhouse, Nick Smith and former Women’s Minister Louise Upston all voted against the new abortion legislation. Collins stood with the party’s small (and declining) social liberal wing: Nikki Kaye, Chris Bishop and Nicola Willis.

As confirmed by a major Harvard University study cited recently by Werewolf, political debates rarely cause shifts in voting preferences during the two months before election day. Among the tiny sliver of voters that do change sides during that period, conversations with friends and the media campaign coverage are more persuasive factors than debates. Faced with a 20 point deficit in the polls though, Collins will be hoping for a rash of road to Damascus conversions, regardless.

Footnote: If the ”meeting his Maker” comment was meant to be a roundabout way of calling Hager a liar, then a self-declared straight talker like Collins should say as much, and deal with the consequences. Collins should also be consistent. Inside the National Party caucus, Whanganui MP Harete Hipango has this year (a) falsely accused Jacinda Ardern of being an advocate of late term abortions that the recent legislation would allegedly facilitate and also (b) concocted a quote distorting Ardern’s views on dairy farming and attributed it to Ardern. If she’s really a Christian, surely Collins should denounce what look like some pretty glaring violations of the Ninth Commandment.

Much of the media response to the Trump vs Biden debate has blamed both participants – and/or the hapless moderator Chris Wallace – for the rancour (and lack of content!) on display. Twice in the same clip, RNZ’s US contributor Simon Marks chided Biden for not following Michelle Obama’s maxim “When they go low, we go high.” Marks seems to have forgotten that the Democrats lost in 2016 with that strategy, and if Biden had followed it this time, he would have been steamrollered and (no doubt) denounced as a pushover. Sometimes, you really have to stand up to the bully.

On the US Media Matters site, Matt Gertz described this ‘equal blaming’ tendency evident in the after-debate analysis as an example of the media’s pernicious“both sidesism” posture of equivalence. There’s a useful Columbia Journalism Review critique of “both sides-ism” available here. Under the guise of objectivity, it enables the laundering of mis-information.

Clearly, this was not an “equal blame” situation. Trump, as the moderator pointed out mid-debate, was initiating most of the interruptions. He was also responsible for the vast bulk of the falsehoods, misleading statements and exaggerations patiently tabulated by the fact checkers at the New York Times. Biden calling him out as a liar was a statement of fact.

Ultimately, much of the media’s distaste reflected the understandable wish that a different, alternative debate should have occurred. Personally, I happen to agree with the lonely Slate columnist that it was actually a good debate – because it accurately reflected the President that the US has, and not the one that it wants him to be. Quite an irony. Rather than being an enjoyable game show or an inspirational piece of political theatre, this debate was a frightening reality check. No wonder so many people turned away from it in dismay.

Footnote: It seems quaint now, but for the first 18 months of the Trump presidency, there was a quiet debate within US journalism about whether to use the “L” word to describe the President’s systematic use of “mis-statements” and “ mis-information.” Starting in 2019 though, the “lies” word has now entered the media mainstream.

There’s a good, brief description here of this evolution in the language the media uses when covering White House utterances. It contains some eye-opening statistics. Trump’s rate of lies has been accelerating. In the seven months to April 2019, he was averaging 23 pieces of misinformation a day, with 45 falsehoods occurring in a single Sean Hannity interview. Since that CJR article appeared in April 2019 though, the tally of Trump lies tabulated by the Washington Post lies has doubled, with 20,000 of them now on record since Trump took office in January 2017.

Joan of Arc packs it in

Later this year, Joan of Arc – the emo /shoegaze/ experimental indie band led by Tim Kinsella – will finally pack it in, after the release of their 24th album. Kinsella has been the sole constant throughout, and also did sterling work with another beloved project, the Owls. The deadpan tone of jokey JoA titles like This Must Be The Placenta and He’s Got The Whole This Land Is Your Land In His Hands is pretty typical. Joan of Arc’s Live In Chicago wasn’t actually a live album, but reflected the fact the band members were alive in Chicago at the time. On their last album, Kinsella stepped aside and invited band member Melina Ausikaitis to do the songs, and the lead vocals.

Such hi-jinks aside, the band’s latest single “Destiny Revision” is a shambling thing of beauty, and in case you’ve ever wondered what macular degeneration looks like from the inside, this video uses it brilliantly, as a special effect.

And from the Ausikaitis era a couple of years ago, here’s her lovely “Punk Kid” Great song, heart-breaking video.