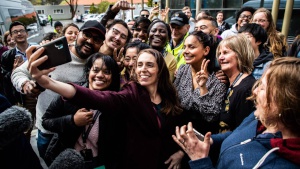 Currently, this election looks like being a no contest. The weekend’s Newshub poll has the centre left enjoying a roughly 57-36% lead over the centre right. Labour is on 50.1% and the Greens 6.5%, while National remains in the dreaded 20s at 29.6% and the Act Party is on 6.3%. Conditions continue to look terminal for New Zealand First. Despite being a stubborn brake on government tax policy and winning a few policy gains of its own, NZF is registering only a 1.9% level of support. The Gold Card voters have gone elsewhere – mainly to PM Jacinda Ardern in gratitude for keeping them safe during the pandemic. Enough centre-left voters have seen the threat of extinction facing the Greens, and have now (apparently)lifted them out of the MMP danger zone.

All of this poses a problem for horse-race journalism, which relies on dramatizing the contest. Yet this election is refusing to turn into a cliff hanger. The election delay was supposedly going to benefit National, since the economic effects of the pandemic would have more time to kick in and erode government support. That hasn’t happened. Astutely, voters do not seem to be punishing the government for events that the electorate has concluded will be better handled under current management, than by the bungling alternative. Despite the best efforts of the centre-right commentariat to promote National‘s latest leader, the kinder, sweeter incarnation of Judith Collins has proved to be no more appealing than the original version.

Regardless, the election campaign is doomed to drag on, despite the vast majority of voters having made their minds up quite some ago. If only it was possible to bring Election Day forward, and get the thing over with. Unfortunately, test match rugby has taken up the available Saturdays.

Footnote: On the upside…now that the Act Party has shown it has genuine MMP-viable support beyond the borders of Epsom, perhaps leader David Seymour can be asked to put his party’s principles into practice. Will Seymour be inviting National to put up a serious contender in his seat next time? It has been one of the anomalies of New Zealand politics that the party prone to trumpeting the alleged virtues of market forces, self-sufficiency and anti-welfarism has relied for the past decade for its existence on a handout (sorry, a hand up) from the National Party. The situation in Epsom would not be one of which Milton Friedman would have approved. Next time around, lets liberate Epsom voters from the shackles of protectionism, and allow market forces to prevail!

Footnote Two: In fact, the Act Party is a good example of neo-Keynesian economics in action. The state picks a likely winner, protects it from competition during the maturation phase, and only when it is big enough to survive on its own does it get exposed to genuine competition. Once the Act team reaches Parliament, one looks forward to them promoting this protectionist formula for business success. It has served them pretty well.

Stealing the US Election (a series)
In nearly three quarters of the locations where the US Postal Service has been ordered (by Trump appointee Mike DeJoy) to de-commission the speed sorting machines necessary for a timely processing of mail in ballots, these machines were situated in areas that Hillary Clinton won in 2016. Has to be a co-incidence, right?

Moreover, and in the crucial swing state of Pennsylvania, Republican state legislators have passed a rule that for a mail-in ballot to be deemed valid, it has to be tucked inside a second “security” envelope. It will be no good just putting your ballot inside an envelope. Thar envelope has to be inside another envelope, or the sorting machine will reject it as invalid.

This situation came to light only a week ago, when a worried state official made it public, in a memo that estimated as many as 100,000 votes in Pennsylvania could be invalidated. The victory margin for Trump in Pennsylvania in 2016 was only 44.000 votes. The Republican aim seems to be either to steal the election result outright or to tie the final outcome up in litigation for weeks and months, thereby enabling Trump to inflame supporters with claims that the election night result is being “stolen” by the Democrats in court.

Footnote One: Trump was booed when he showed up at the lying-in-state of Ruth Bader Ginsburg, with the crowd reportedly chanting “Vote him out! ” That seems significant. Voting someone out is a democratic measure. The equivalent chant (about Hillary Clinton) of “lock her up!” coming from Trump supporters, is the opposite of democracy.

Footnote Two: This week (Tuesday night US time, in Ohio) Trump and Democratic contender Joe Biden will face up for the first presidential debate. Will anyone in the entire United States be sitting down in front of their TV sets for that debate, waiting to see what the policy positions of the candidates may be on the issues of the day, before making up their minds and casting their vote? Hardly. I know…political debates are only theatre, and the members of the audience have already made their casting decisions as to who the hero, and who the villain, will be.

Talking of alternative worlds… By now, the story of the recent re-discovery of the circa 76 year old Canadian trans musician Beverly Glenn-Copeland has become a media staple. It even made the Washington Post a few days ago. Long story short : about four years ago, his long lost 1986 album Keyboard Fantasies got picked up and heavily promoted by an influential Japanese record collector. Gradually since then, the album’s enchanted mood of gentle optimism has found an audience, especially during this dark time. Keyboard Fantasies is best experienced as a whole – the album is on Spotify – but here’s the stately “Let Us Dance…”

Last year, my own entry point to Glenn-Copeland’s unique world came after stumbling across the more uptempo (but equally beatific) track called “ In The Image” from his 2004 album Primal Prayer. “Don’t let a little worry make you crazy..” Right. After a difficult life, Glenn-Copeland has created a place that a growing number of people would like to live in, if only for a respite :