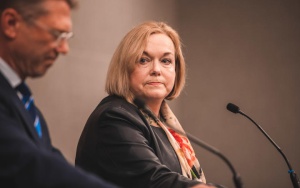 National released its economic and tax policy last Friday. Weirdly, the plan was announced right at the end of the news week, when whatever impact it managed to generate would be likely to dissipate over the weekend. Well…. that now seems all for the best. The plan is now known to have a $4 billion hole in it. Apparently, National used outdated figures for the amount it stood to save from NOT paying into the Super Fund. Amusingly, the $4 billion mistake was almost exactly the same size as the $4.7 billion that National still promises to give away in tax cuts.

In damage control, National have now added the missing amount onto the government’s debt repayment schedule. So much for the burden on those future generations that the National and the Act Party were crying crocodile tears for only a week ago. Naturally, both party leader Judith Collins and finance spokesperson Paul Goldsmith have done their best to minimise this blow to National’s claim to having a higher level of economic competence. Last night’s TVNZ 6pm news bulletin did its best to help National out by resurrecting the $11.7 billion hole that Goldsmith’s predecessor Steven Joyce claimed to have found in Labour’s costings before the last election.

This was pretty outrageous behaviour on TVNZ’s part, given that at the time, Joyce’s claim had been immediately discredited by economists and business commentators as ideologically diverse as Eric Crampton, Cameron Bagrie, Brian Fallow, Keith Ng ,Lloyd Burr, Michael Reddell and Shamabeel Eaqub. In other words, this wasn’t a case of one mistake each, with Labour’s budgetary ‘hole’ being bigger. It was a case of two major blunders by National in its budget calculations, in two consecutive elections.

Keep in mind the context, too. The error may be being fixed by extending the timetable for repaying government debt, but National still plans to NOT invest over $15 billion in our future ability to pay for National Super. So much for planning to meet future needs. The tax cuts that are the electoral selling point of the whole plan will not be shared equally, either. The biggest gains will be enjoyed by those least in need – this despite a looming Covid-19 recession in which hundreds of thousands of New Zealanders will be out of work and subsisting on inadequate benefits. Regardless, National is proposing a tax handout in which a low income earner would gain an extra $416 a year, while high income earners would stand to receive as much as $4,000.

Also keep in mind that during a pandemic, the major recipients could well feel motivated to save the extra money or use it to pay off debt, rather than act like carefree spenders in the retail economy. Meaning : thanks to Covid-19, the intended stimulus effect would probably be less than might normally be expected. If the over-riding aim really was to stimulate the retail economy, the best way of doing so would be to raise benefits.

In sum then, quite a familiar package from National. Once again, it plans to under-invests in future needs and exacerbate social inequality – while continuing to live in denial about issues like climate change, fossil fuel dependency and water degradation. Once more, the end purpose is to enable National to offer tax cuts as an election bribe. Its a tired formula, No wonder National is polling so badly. The real wonder is that there are still about a third of eligible New Zealanders willing to vote for them.

US President Donald Trump has said he will be nominating a female candidate to replace Ruth Bader Ginzburg on the US Supreme Court. The front runner is said to be Amy Coney Barrett, a Catholic conservative judge known to hold extreme anti-abortion views. Unfortunately, that would be only part of the baggage that Barrett, who is only 48 years old, would bring to her lifelong tenure on the Supreme Court:

We shouldn’t be surprised that the Republican Party is rushing to fill this vacancy only six weeks before an election that – if we can believe the polls – could well see Trump lose the presidency. The election might also see the Republicans lose control of the Senate. Four years ago, the Republicans cited the alleged proximity of the 2016 election – at that point, still eight months away – as an excuse to block President Barack Obama’s nomination of the judicial moderate Merrick Garland to the Supreme Court. Yet now, with the election now only 45 days away (some people have already voted early) the Republicans are racing to foist Donald Trump’s latest arch conservative jurist onto the American public for decades to come.

Reportedly, two Republican senators – Lisa Murkowski and Susan Collins – have said they will not support ratifying a Supreme Court nomination at this late point in the electoral cycle. This may be tokenism. Collins is in a tight race to hold her Senate seat in Maine, where liberal voters have tired of her previous meaningless gestures of independence. (After publicly wavering, Collins still voted to send Brett Kavanaugh to the Supreme Court in 2018.)

Pressure will now come onto senator Mitt Romney to refuse to ratify. If Romney and one other Republican can discover a conscience, the nomination could still be deferred. Yet given how thoroughly the party of Lincoln has morphed into the cult of Trump, that likelihood seems a very long shot.

What with Trump and the pandemic, it is pretty hard these days to find a protest song fit for the times. This one by Tyler Childers though, offers some sharp- eyed observations on white boy rage:

It’s the worst that it’s been since the last time it happened
It’s happening again right in front of our eyes
There’s updated footage, wild speculation
Tall tales and hearsay and absolute lies

Been passed off as factual when actually, the actual
Causes they’re awkwardly blockin’ the way
Keeping us all from enjoyin’ our evening
Shoving its roots through the screens in our face

Rather than some brighter tomorrow, Childers imagines his armed and fearfully confused neighbours coming to town in a mood to wreak vengeance on all and sundry:

Now, what would you give if you heard my opinion
Conjecturin’ on matters that I ain’t never dreamed
In all my born days as a white boy from Hickman
Based on the way that the world’s been to mе?

It’s called me belligеrent, it’s took me for ignorant
But it ain’t never once made me scared just to be
Could you imagine just constantly worryin’
Kickin’ and fightin’, beggin’ to breathe?

How many boys could they haul off this mountain
Shoot full of holes, cuffed and laid in the streets
Til we come in to town in a stark ravin’ anger
Looking for answers and armed to the teeth…