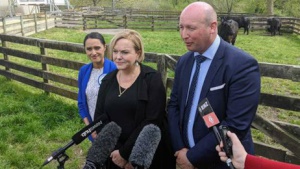 What on earth has happened to the political parties n the centre-right? Once upon a time in the US, the party of Lincoln was a respectable political party before it devolved into the cult of Trump. Here at home, the National Parry used to be able to manage and administer the economic orthodoxy in a reasonably competent fashion. Now it can barely do simple addition and subtraction. Something must have gotten into the water, and not simply out on the farm.

The shambles that is National’s alternative Budget continues to unfold. Wrong figures used, items counted twice, the cost of the basics in health and education – and the unexpected – not properly factored in at all. National has made much of having a “plan”to steer the economy through the pandemic. Well, highly competent mainstream analysts – like Brain Fallow in the NZ Herald – have looked closely at National’s economic plan and found it to be ( literally) incredible. Not because of the mistakes, but because of the unrealistically limited amounts that National finance spokesperson Paul Goldsmith has set aside for the country’s operational needs over the next few years. Fallow’s cogent analysis can be found here. Predictably, Goldsmith has responded with an ad hominem attack.

When the pandemic struck in March and the coaiition government launched its initial multi-billion response to it, there seemed be at least one silver lining. If the state could throw away the old rulebook and tackle the pandemic with every means at its disposal, then surely this proved that climate change could be treated with the same urgency. No such luck, though. Over the past fortnight, the two major parties have been hotly engaged in a bidding war for farmer affection. On the campaign trail, even the media have seemed almost apologetic about mentioning “dirty dairying” at all.

For its part, Labour aims to streamline the consent process by pumping $50 million into helping farmers to plan their activities in smarter ways on line. For perspective, keep in mind that this is the same amount allocated in total to the entire international education sector to enable it to survive the pandemic. Still, that gesture has been nothing compared to the feast for farmers that National has in mind. While paying lip service to “sustainability” National has been showering affection on farmers by vowing to protect them from further bullying by Labour and the Greens, and by promising to remove virtually every last niggle, worry and obstacle from the farming landscape.

National’s pledges to farming amount to a sweeping attempt to turn back the clock. Water quality standards, RMA planning rules, Zero Carbon goals, nitrogen caps and methane targets will either be scrapped outright or reviewed with a view to their reduction or elimination. According to National, it “understands” farmers while Labour does not. Yet looking on from afar, many urban voters may be wondering how this proposed bonfire of agricultural regulations can possibly be compatible with meeting the challenges posed by climate change. At some point, the campaign rhetoric on farming has crossed the line from understanding to indulgence. Farmers are being encouraged (notably by Judith Collins) to live in denial about climate change unless the process of meeting its challenges can somehow be made to impose no extra costs on agriculture. Back on planet Earth though, change is rarely pain-free.

Of course, this fervent wooing of the farming vote may be only a temporary fling. At some point, even a National government would need to engage with the realities of climate change, and with the global marketing challenges it is already posing. To take just one example: scrapping methane reduction targets when agriculture still accounts for 48% of our climate change emissions is not a sustainable position. Soon, as Jacinda Ardern pointed out in the leaders debate, our trading rivals will have cut the low-hanging fruit of their transport emissions. Our farming sector will then find itself at a distinct marketing disadvantage if it is not being seen to be upping its game on issues to do with planetary protection. Farming may want to live in the past. The country cannot afford to do so.

For the foreseeable, farmers will indeed be the backbone of our economy. The pandemic has slashed the export earnings from tourism and international education. Farmers may well want to bask in our unconditional gratitude. Currently, many farmers appear to resent being reminded that the toxic combo unfettered irrigation and relatively unregulated dairying have left New Zealand with a legacy of polluted lakes, rivers and waterways. So far, farmers have largely been cushioned from paying for the environmental harms they have been inflicting. They can hardly expect to avoid picking up some of the tab for the repair job.

National’s entire election strategy has been about shoring up its base. It is handing out tax cuts for its urban supporters and de-regulation promises in rural areas. Pandering is an easy option. It is simpler for National to line up alongside the hurt feelings and day to day concerns of farmers, than remind them that they need to do better and/or require them to do so. Yet the demonising of the current government’s tentative attempts to mitigate the environmental harms caused by farming will ultimately do farmers themselves no favours. Sure, that approach may win National a few extra redneck votes. Yet surely, disparaging the need for reform will merely postpone the inevitable, and make the eventual adjustment curve to climate change realities that much steeper.

In the last Werewolf column, I made passing criticism of the way TVNZ had – either with deliberate intent or sheer incompetence – had stacked the deck in the recent leaders debate. The lighting and camera positioning – front on for a warmly lit Collins, and at a shadowed angle for Ardern, with Collins routinely in shot as Ardern spoke (compounded by the continuous cutaways to Collins making faces at Ardern’s comments) all added up. On his Facebook page, Bryan Gould made these points far more eloquently:

As a former television professional, I watched last night’s leaders’ debate with particular interest. I was fascinated by how decisions by the studio director and the positioning of the cameras influenced the course of the debate, usually to Ardern’s disadvantage.

As the opening shots demonstrated, Collins had the advantage of a camera directly in front of her, and to which she could speak full face on. Ardern, by contrast, was being filmed from somewhere out to her right, with result that she was seen largely in profile, speaking to no one in particular, and in wide shots, with Collins a constant presence over her shoulder in the same shot.

The consequence was that Collins was on screen most of the time and had ample opportunity to use facial expressions and physical gestures by way of comment on what Ardern was saying and as she was saying it. The studio director added to these advantages by making repeated cut-aways to Collins while Ardern was speaking.

The overall impression thereby created was that Collins was at the heart of the debate, while Ardern was floating around somewhere on the periphery. Labour will need to address these issues with TVNZ before the next debate.

On Sunday US time, US President Donald Trump will announce the replacement to US Supreme Court justice Ruth Bader Ginsburg. As usual, the choice will depend on which candidate can best serve the personal interests of Donald John Trump, and maximise his re-election chances. Hmm. Would that aim be best served be picking the arch conservative Catholic (Amy Coney Barrett) or the Hispanic Trump partisan (Barbara Lagoa) from the swing state of Florida?

Both options seem appalling if you’re interested in the fair and competent rule of law. Barrett has said that her guiding judicial principle is furthering the Kingdom of God. See an analysis of Barrett’s awful judicial track record here, and Lagoa’s equally ghastly judicial history is available here. Meanwhile, due praise continues to be showered on Ginsburg’s lifetime of brilliantly argued support for human rights. She was particularly eloquent on how. in a democratic society, the rule of law functions to protect the rights of minority and marginalised groups. Already, some commentators have pointed to the striking contrast between Ginsburg’s worldview and that of the leading contenders tipped to replace her.

Yet amid the praise due to Ginsburg, there has also been a small but consistent strain of criticism. One oppressed minority was consistently and conspicuously absent from Ginsburg’s writings and public statements: the Palestinians. One might have expected that the treatment of Palestinians would have registered on Ginsburg’s radar. Not simply because of the impact of the suffering systematically inflicted on Palestinians but because of the implications of that maltreatment for the evolution of the rule of law within Israel, and internationally. A couple of years ago, the US journalist Kathryn Shihadah used the term P.E.P, (Progressive, Except Palestine)to characterise Ginsburg’s position:

For someone dedicated to liberty and justice for all, she is resoundingly silent on the issue of Palestine. Nowhere in her recently published collection of writings, My Own Words, do the words “Palestine” or “Palestinian” appear. Even “Arab” is nowhere to be found, although she discusses the Holocaust, Zionism, and Israel.

Shihadah’s article acknowledges Ginsburg’s shining achievements in founding the Women’s Rights Project at the ACLU and in taking hundreds of cases that challenged and overturned gender discrimination. This makes her silence on the unequal legal rights available to Palestinians (and in different ways, to Arab Jews) seems all the more significant. Especially so in the light of the passing of the “nation-state” law in 2018, which ratified Israel as a Jewish state, in which Jews have rights denied to non-Jews resident within Israel and the occupied territories. A useful backgrounder can be found here on this Basic aka National Law.

Last week, the Knesset re-affirmed this legally enshrined structure of inequality when it voted down a Bill put forward by the opposition Joint List and which would have outlawed religious, ethnic and linguistic discrimination. The US academic Juan Cole has written a critical backgrounder here on the recent Knesset vote. As Cole noted :

Israel has all along had a choice between being a democratic state for all its citizens or being an ethno-nationalist oligarchy with second-class citizens at home and apartheid subjects in the West Bank. This is not the first Knesset vote to demonstrate forcefully that the Israeli majority wants the latter.

While not religious, Ginsburg made it clear that her Jewishness was central to her identity, and to her life’s work. One can only wish that Ginsburg could have seen fit to bring her brilliant intellect and moral authority to bear on the differential treatment out to Palestinians under Israeli law. Yet evidently she did not feel impelled to write or speak publicly about the corrosive effect that the treatment of Palestinians continues to have on Israel’s founding ideals.