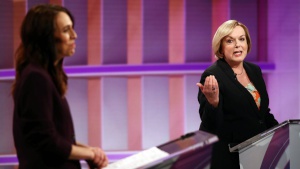 Do political debates change voter intentions, and cause voters to switch sides? According to a 2019 Harvard Business School study conducted across 61 elections in nine countries involving 172,000 respondents, the answer would seem to be a resounding “No.” Political debates have little effect on voter behaviour, let alone on election outcomes. Crucially, the limited effect they do have does not involve a change in voters’ policy preferences.

In the New Zealand context, this would mean that in the wake of National leader Judith Collins better-than-expected performance in last night’s leaders debate, the main impact will be to shift votes between the centre-right parties. At best, Collins may have won back some of the centre-right voters who had drifted off to the Act Party, rather than her winning any centre-left votes from Labour.

Why do political debates matter so little? What the Harvard study found was that nearly three quarters of voters have already made their minds up as early as two months before Election Day. A further 15 % of voters did finalise their intentions during those last two months, but without changing their policy preferences. As mentioned, this 15% bloc of centre-right and centre left voters merely shifted between the options on their own side of the ideological fence, but not across the fence. Even then, the study found the political debates were less important factors in shaping voter intentions than the media coverage of the campaign and the conversations held among friends. Finally, there seemed to be little or no co-relation between winning the political debates – as Hillary Clinton was almost universally judged to have done in 2016 – and winning the subsequent election.

If therefore, one analysed last night’s TVNZ/Colmar Brunton polling results, some of the 5% drop in Labour’s support would have gone into the Greens’ healthier 6% result. (Some in house polling had recently put the Greens down at little over 3%) National’s one per cent drop showed that it had not staunched the drift of its disillusioned supporters to the Act Party – whose blend of populism, anti-welfarism and hardline economic policy seem to have drawn support from both National and from New Zealand First, which remains in the polling doldrums at 2%, and well shy of survival.

Much of Act’s current success has come down to David Seymour’s appeal to floating voters, initially attracted by his populist stance on the a-political issue of euthanasia. We saw a a similar trend occur at the 2002 election, which was the last time the tide went out on National. In 2002, floating centre-right voters shifted in droves to the personable, reasonable sounding Peter Dunne, and delivered Dunne’s United Future fringe party a sizeable influx of parliamentary colleagues. Belatedly, voters discovered that instead of voting in a bunch of rational centrists, they had elected a toxic group of Christian fundamentalists.

At this point, David Seymour looks very much like the Peter Dunne of 2020. He seems a nice forthright and reasonable chap, at least until voters realise – hopefully before the election – that the party he leads would like to eviscerate the welfare state, and give the profit motive a far bigger role in the provision of social services. As mentioned above though, if Collins has rallied support on the centre-right after last night’s debate, it will almost certainly be at Act’s expense.

Like most bouts of homework, political debates are not much fun, but they can provide some useful morsels of information. Last night for instance, we learned that Collins does not own her second house. Her trust does. But she would also like you to know that she is of plain and ordinary stock, and raised on a Matamata dairy farm. Just like all those other Kiwi battlers who don’t have trusts, second houses, first houses or an affordable rent. Tens of thousands of them are less about the second home, and more about the second (and third) jobs required to make ends meet.

What we learned last night was that if Collins has anything to do with it, none of those low-income battlers will be getting a minimum wage increase in April, to alleviate the pressure on their families to hold down multiple jobs – or to help prevent their kids from leaving school prematurely to support Mum and Dad. National will be offering such families only a pittance in tax relief. Workers on $40, 000 would be getting only an extra $8 a week. Someone on social media has made this point:

Go back to April …….supermarket staff, essential workers, were our heroes. 5 months later National is offering them tax cuts of 20c an hour or $1:60 a day with no hope of a minimum wage increase. How quickly they are forgotten.

Under National’s plan you’d have to be earning $80,000 a year to take home a substantial increase of $52 a week. Those with trusts and second homes however, stand to gain far, far more. This would be in line with Collins debate promise to scrap the government’s regulations on irrigation schemes. Apparently, the red tape is inhibiting our ability to grow more avocados to spread on the nation’s breakfast toast.

These kind of attack lines were open to PM Jacinda Ardern. She could have highlighted that National’s socially regressive tax plan funnels most of its benefits to those least affected by the Covid-19 recession. Yet pointedly, Ardern did not attack or press her opponent. Instead, she chose to stick politely (“May I?”) to making her points, while not interrupting or engaging heatedly with Collins. Throughout, she seemed unfazed by Collins’scoffs and interruptions and peculiar insistence on calling her “Miss Ardern” – apparently, a jibe at Ardern’s relative youth and unmarried status. If Ardern was using a ‘rope a dope’ tactic to provoke Collins into some intolerable act of nastiness, it didn’t work.

Collins was more energetic, crisper and more confident. She was also more brightly lit and kindly positioned on set, and face on to the camera. Ardern was partly in shadow, and needed to turn to address the camera. If that sounds like nit-picking, keep in mind that the example (her “strong finish”) cited approvingly by TVNZ’s expert panel, also happened to be the one time when the camera had Ardern front and centre….although still underlit.

Last night, the polls and the debate overshadowed this report of.another $4 billion funding error by National. Yes, National has a plan, and no reliable idea about where the money for it will come from.

Footnote One: National’s answer to our border security needs will be to create a new bureaucracy – the Border Security Agency – that will apparently be based on the Canterbury Earthquake Recovery Authority led (briefly) by Roger Sutton and masterminded by Gerry Brownlee. Because that worked so well last time.

Footnote Two: National (and the Act Party) would also like to invite more private sector operators in to help manage the provision of quarantine services. Because it worked so well last time when private providers like Serco were invited in to run prison services. And because it worked so well in Victoria when low paid, poorly trained security staff were entrusted with the care of quarantine facilities over there. Does National seriously think that private operators incentivised by the potential for profit would be more likely to employ sufficient numbers of adequately trained staff?

Also, would those same private operators really be more likely – in the national interest – to deny the whims and the wishes of their high-paying foreign guests? Hardly. If enacted, National’s border security plans would put the country at greater risk of further lockdowns, thereby denying tourism firms any foreign or domestic customers at all. The hard-pressed Queenstown tourism operators should be worried.

Footnote Three : In another example of the fact free environment in which National is currently operating… Check out this humiliating fact checking takedown by the Australian Associated Press of Collins’ claims last week that (a) New South Wales has had fewer Covid-19 fatalities than New Zealand ( in fact, it has had more than twice as many) and (b) that the New South Wales economy is “booming.” It isn’t. Like New Zealand, it is in recession. Laconically, the AAP fact checkers did say Collins got two things right : yes, NSW does have a bigger population than New Zealand , and yes, NSW is allowing people to attend rugby matches.