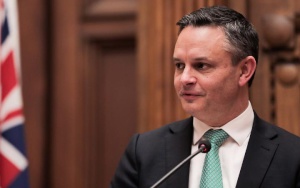 The apology by Greens co-leader James Shaw was certainly comprehensive. He’s so very sorry that he’s let down not only you, but you and you as well. If you missed out, chances are he’ll be stationed somewhere down Lambton Quay later in the week to deliver his regrets in person.

Don’t get me wrong: Shaw did a Very Bad Thing. Using $12 million of taxpayer funds to build a for-profit private venture offering courses in eco-mysticism is not what the Green New Deal was meant to be about. But conscience aside, there’s an added reason why Shaw and the Greens have needed to confess his mistake so abjectly. So called “values” parties that base their brand on being parties of principle all but invite the public to hold them to higher standards. The classic example being the Australian Democrats, whose centrist vote on GST (and the internal splits that it triggered) destroyed the party after the 2001 election. This article not only explains why the Democrats flamed out, but also offers an interesting commentary on how quickly the media can turn on its former darlings, especially when the political leader in question is a photogenic young woman.

Shaw’s gaffe could not have come at a worse time. The party is polling in the MMP danger zone at 5-6% of the vote. Overseas voters usually boost the Greens’ election night tally but this year, much of that vote will go to Labour, thanks to Jacinda Ardern’s international stardom. Now, Shaw’s decision to treat the green private school in New Plymouth as a ‘shovel ready’ construction project (rather than as, duh, a private school being gifted with state funds) now risks alienating another Green constituency: teachers in state schools.

In his apology speech, Shaw did his best to give context to his original decision, and he largely avoided the obvious risk of looking as if he was still trying to justify it. A centrist by ideology and by temperament, Shaw may have even considered the green school project to be a kind of peace offering to New Plymouth and to Taranaki, in the wake of the Greens’ efforts to shut down the fossil fuel industry on which the province heavily depends. They lose the oil and gas industry, they get a green school. Everyone’s a winner.

Unfortunately for Shaw, there is a lot of free-floating anger out there right now, not all of it pandemic related. Canterbury DHB has been hit by a rash of board resignations, in the wake of budget shortfalls and looming staff and service cuts. A review has indicated a likely $56.9 million cut in staff and services. That review also noted an “imbalance” in nursing staff in Canterbury DHB (compared to some other DHBs.) That’s how the people who write these reviews think, in terms of staffing ratios. They don’t consider that there might be a lot of nurses in Christchurch because there’s been a lot of nursing required.

Nurses, another key Greens constituency have been given good reason to feel they are in the firing line, despite their sterling efforts (much-praised at the time) after the earthquakes and the mosque attacks. Thus, the anger. The people on the front lines of healthcare delivery are now feeling disposable – during a pandemic – despite their long and draining care of patients after the earthquakes. Not to mention the ongoing burden of care they are still carrying after the events of March 15, 2019. There has been a long period of recovery for those directly and indirectly affected. Costs have also accrued as some surgery deferred last year (because of the priority given to mosque attack victims) has eventually needed to be done in the private sector.

Somehow, the government – which won so much political kudos for its response to the mosque attacks – now seems willing to let those cuts to jobs and services at Canterbury DHB go ahead. Yet, while preaching the need for budgetary restraint in Christchurch, it is finding stray millions for building a private school in New Plymouth and fixing up a racetrack in Riccarton. Sometimes “sorry” is the easiest word to say.

National do not do apologies. That’s because they’re always right – or at least centre right – which for some people comes down to the same thing. Any apparent errors are due to inexplicable misfortune, or to accidental “lapses” from normal standards of excellence. When it comes to the rantings of Judith Collins’ wretched spouse, this is – allegedly – not his fault but our fault for not having an earthy sense of humour. When the husband of the Opposition leader personally abuses the Prime Minister on social media, that’s inherently hilarious, right?

Given what has gone down in the National Party over the past three months it is funny (in the weird sense. not the ha-ha sense) that anyone is suggesting that it is Jacinda Ardern who needs a test of competence. But that’s just the deadpan brilliance of David Wong-Tung’s mind at play, I guess.

Competence. Gerry Brownlee. That’s right, they don’t belong in the same sentence. By an act of inexplicable misfortune, Brownlee is now the deputy leader of the Opposition. Many National Party voters must be wishing they could hide him in a shipping container until after election day. Early on, Brownlee peddled conspiracy theories that the government was deliberately hiding information about the pandemic. Of late, he has been claiming it would be “ridiculous” to expect the EQC to have enough funds and resources to be ready for… an earthquake. Why, he explained, it would be just as ridiculous to expect the government to have enough resources on hand to cope with a pandemic.

Now if you were unkind – or angry… you could say that the ineptitude of the EQC, the lack of pandemic preparedness and the sad state of many rundown state schools were all very much legacies of the last National government. It would not be “ridiculous” at all to reach that conclusion. Routinely, National would announce policy but then fail to allocate the funds needed to enact it. Now, we have the Provincial Growth Fund being all about allocating the funding, but without any sign of a rational cost/benefit policy process. Surely there has got to be a middle ground in between.

Footnote One: Want an example of National not following through with adequate planning? About 12 months ago (ie before the coronavirus changed the planet) the esteemed Johns Hopkins university in the US published a country-by-country analysis of pandemic preparedness. New Zealand came out pretty badly, for a developed country. The report makes interesting hindsight reading in the light of the actual pandemic. Our relatively high scores – on immunisation and microbial resistance – are legacies of work done in decades past. But look at what they say in the footnotes about our PPE stock:

Both major parties slept on preparing this country for the pandemic. But only one of them remains in denial about the planning and resourcing shortcomings they left in their wake.

Footnote Two: Those personal attacks on Ardern emanating from the Collins household will no doubt, play pretty well to National’s shrunken base. But imagine the outrage from that the same quarters if Clarke Gayford chose to ridicule Collins’ spouse in the same charmless fashion. To some extent, this ‘playing to the base’ strategy is another sign that Collins and the party she leads have virtually given up trying to win this election. Instead, they seem to be trying only to shore up their core support in order to minimise the damage. With Collins at the helm, National is doing nothing to reach across the aisle and woo even the centre-right voters who drifted away months ago to Ardern. They’re choosing to stick with the talkback crowd, and fight with New Zealand First for the redneck vote.

For the past ten years or more, Jazmine Sullivan has deserved to become a household name. But fame hasn’t happened, she’s had personal struggles….and yet the quality of her own music, and of her contributions to the music of say, Frank Ocean remain impressive. This new single is a broken up and not getting over it kind of song , and it sounds as if it’s based on hard experience.

And from a few years ago, here’s another track where she’s heartbroken again. This track has her running up and down the register looking in vain for refuge, yet somehow winning out regardless.