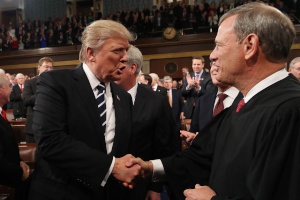 If you need a chilling reminder of how weirdly different the United States is to New Zealand…then abortion rights is the place to start. Last Friday, in a case called Hopkins vs Jegley, the 8th Circuit Court of Appeals upheld the right of the state of Arkansas to impose all four of its 2017 regulations restricting access for women to abortion. Unfortunately, this outcome was made almost unavoidable, thanks to the precedent devised only a month ago by John Roberts, the conservative Chief Justice of the US Supreme Court.

You can read the 8th Circuit ruling in its entirety here. In Slate magazine, legal affairs columnist Dahlia Lithwick has briefly summarised the Arkansas regulations:

The first of these laws requires clinics to report the names of abortion patients under 18 to local law enforcement. These clinics must then preserve the fetal tissue and treat it like criminal evidence. The second law forces abortion providers to spend “reasonable time and effort” acquiring a patient’s medical records for her “entire pregnancy history” before performing the abortion. The third law grants equal rights over fetal remains to both partners, with no exception in cases of rape. A patient must notify her partner before the abortion and ask which method of disposal he prefers. If both partners are minors, the patient’s parents get to decide how fetal remains are disposed of. If the patient is a minor but her partner is an adult, then he—not the patient—makes the choice. These rules effectively prohibit medication abortion, which occurs at home, where the provider cannot control the disposal of fetal remains. The fourth and final law bans the safest and most common procedure for second-trimester abortions.

Yikes. What made all this possible/inevitable ? Well, a month ago, in a separate case called June Medical Services vs Russo, Roberts got a ton of undeserved praise for decisively joining the liberal minority in rejecting a set of even more outrageous abortion restrictions proposed by the state of Louisiana. At the time though, some clear-eyed commentators – including Lithwick – warned that the June Medical ruling had actually created a “ how to” manual on how to bury abortion rights and get the Supreme Court’s tick of approval for any abortion restrictions in future.

Crucially, Roberts used June Medical to remove a 2016 Supreme Court precedent that required courts to weigh the medical benefits of an abortion restriction against its burdens. As Lithwick says, the 8th Circuit then had to defer to the new standard:

Under the new test, courts may not ask whether an abortion law provides any benefits to patients. Instead, they must only ask whether the regulation imposes a “substantial obstacle” to an individual’s path to an abortion. Thus, the 8th Circuit sent the case back down to the trial court for reassessment, allowing the Arkansas laws to take effect in the meantime.

What is at stake here is the rolling back of the progress that US women have made in reproductive rights over the past century. For this and other reasons, the United States cannot afford to re-elect Donald J. Trump. Unfortunately though, the Supreme Court and its conservative majority will still be poised to undermine any legislative agenda of social reform that a President Joseph Biden might try to enact.

For the moment, lets try not be too downcast. There is cause for optimism. Over the past few months of opinion polling the odds have been increasing that Biden will win the November election, and bring the toxic Trump presidency to an end. That’s assuming Trump doesn’t (a) de-legitimise the result by undermining the postal ballot aspect of the vote count and then (b) refuse to leave office..

Even if those horrors can be avoided…. Biden is, by nature and on his track records, not renowned for being a radical reformer. Even if he was, the odds are stacked against him. How come ? Yes, Trump is currently polling very badly over his handling of the pandemic, and of the US economy. But as yet, the election campaign proper hasn’t begun, and Biden still hasn’t announced his running mate. Two deadlines for that decision (August 1st and the first week of August) have come and gone. Lets assume though for the sake of argument that nothing impedes Trump’s decline in popularity, and that the Republican Party and its GOP state governors fail to steal the election (a) by suppressing voter turnout and (b) by invalidating large numbers of the votes actually cast.

As things currently stand, the Democrats control only the lower legislative chamber (of Congress (aka the House) while the Republicans control the Senate. Therefore, the Senate could once more play a spoiler role in blocking the legislative agenda of a Democratic president. From 2010 onwards, the Republican Senate crippled President Barack Obama’s attempt to substantially reform healthcare. (Obamacare ended up being only a shadow of its original self.) Outrageously, the Senate also refused to allow Obama to exercise his constitutional right to appoint a replacement judge (ie the judicial moderate Merrick Garland) to fill a vacancy that had arisen on the Supreme Court. As a direct result, Trump has been able to appoint two very conservative justices, thereby swinging the Court decisively to the extreme right.

Here’s the point: given its current ideological colours, the US Supreme Court cannot be trusted to once again decide a close election outcome. Also, any major reforms embarked on by the Biden administration will probably need to survive a gauntlet of Senate votes, and appeals to the Supreme Court.

Biden and the Court

But hey, lets just assume the Democrats win the presidency, hold onto the House and – good grief – achieve the difficult (but not entirely impossible) job of winning a Senate majority. If Biden wins, two of the elderly, ailing members of the Supreme Court’s liberal minority ( ie, Ruth Bader Ginsburg and Stephen Breyer) will retire, and Biden will get to appoint their replacements. Fine. But that means that a President Biden will (probably) only get to maintain the liberal minority. He will not be able to create a liberal majority. Keep in mind that the oldest of the five conservative judges (Clarence Thomas) is only 72 years old. MeIt could therefore take another decade, and require several Democratic administrations, to reverse the current ideological stance of the Supreme Court.

Why does that matter? To repeat : any substantive legislative changes sought by a Biden presidency will be open to challenge to a Supreme Court likely to retain its radically conservative majority for the foreseeable. If, as also seems likely, the Dems fail to win the Senate that will dictate the ratificatiion process, then Biden will be forced – like Obama was before him – to appoint only moderates to the bench. He will noit be able to get through the Senate proicess any true liberal counterparts to the Court’s conservative extremists Samuel Alioto, Clarence Thomas, Neil Gorsuch, and Brett Kavanaugh. Every time, Obama had to appoint a relative moderate, thus swinging the balance of the Court even further to the right. Ultimately, he couldn;t even get to appoint a moderate. These days, one of the Obama moderate appointees – Elena Kagan – does not always reliably vote with the liberal wing.

Footnote: Am I over-stating the role that ideology plays in Supreme Court decisions? No, not at all. Look at the pattern. Over the last 20 years, a conservative US Supreme Court has :

• Awarded the presidency in 2000 to the Republican candidate via the Court’s flimsy and arbitrary ruling on the Florida recount
• gutted the 1965 Voting Rights Act, the main legislative achievement of the US civil rights era. The Roberts Supreme Court removed federal oversight of particular states (mainly in the South) that try all sorts of bureaucratic tricks to dis-enfranchise their minority populations. With deliberate naivete, the Roberts Court argued that the battle for voting rights had been won. The relevant case was Shelby County vs Holder.
• opened the door to major US corporates buying US elections (and their policy outcomes) by bestowing on corporations the same rights as individuals. The relevant case was Citizens United vs FEC..
• nominally recognised LGBTQ rights to freedom from discrimination in the workplace via two cases ( Bostock v. Clayton County and Altitude Express v. Zarda). However, in his ruling, Justice Neil Gorsuch (a) signposted and (b) left unresolved the conflict with other US laws that exempt and permit religious grounds for discrimination against LGBTQ people. These laws include the Religious Freedom Restoration Act, which enables religious-minded employers (and churches, which are big employers) to continue to discriminate in their firing and hiring practices against gay, lesbian, bisexual and trans people. As an added tool to achieve that socially repulsive purpose, there’s this doozy:
Mississippi HB 1523, implemented in October 2017, allows people who have “the sincerely held religious beliefs” that marriage “should be recognized as the union of one man and one woman” and that “gender” refers to “biological sex determined at birth” not to provide services, including housing and employment, to LGBTQ people. That may protect religious employers who choose not to hire or to fire an employee who is LGBTQ.

Moving right along, the Supreme Court has also :

• attacked public sector trade unions by preventing them (on free speech grounds!) from collecfing fees from non-members who benefit from the gains won by those unions. The relevant case is Janus vs AFSCME.
• Stunningly, the Roberts Court then failed to uphold the same free speech principle when it ruled against the non-religious citizens of Montana who had objected to having their taxes used to finance religious schools. The relevant case was Espinoza vs Montana. As Slate pointed out, with this ruling John Roberts has bulldozed the boundary between church and state,- by in effect, requiring all states and all citizens to finance religious schools.
One could go on, and on, but you get the picture. Personally, Donald Trump may indeed be pandering to evangelicals and Joe Biden may indeed be personally lacking in the mental and physical energy that the presidency requires.(Arguably, Ronald Reagan was in even worse shape, and still served two presidential terms) Yet IMO, the structural barriers facing the next Democratic President deserve a lot more attention than the personal foibles of the two candidates. .

The Electoral College is one of those structural problems. It weights the vote in favour of the rural areas where Republicans dominate, and it devalues the vote in metropolitan centres where Democratic Party votes tend to congregate. As mentioned, other structural problems will arise if the Senate remains under Republican control and then stonewalls and thwarts Biden’s attempts at acting on the mandate given to him by voters.

In addition, the Supreme Court will be deeply and ideologically hostile to any Democratic Party initiatives to curtail corporate power, empower ethnic minorities, tackle social inequality, reduce the toxic role of religion in American society, and protect the reproductive rights of women. For liberals, winning the November election will be only the beginning of the battle.