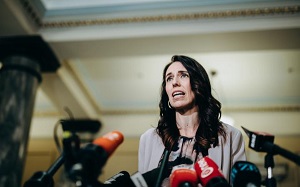 Hi, team. While the majority of the team of five million has gritted its teeth and obeyed the rules throughout the Covid-19 crisis, a sizeable minority has blamed the ref for their every discomfort. Why can’t the government make the virus go away? Why can’t government lift the burden of worry from the retailing, tourism and hospitality sectors, for however long this pandemic will last? Why can’t the government extend the wage subsidy scheme indefinitely so that no employer has to get stressed about their ability to pay their staff ? And finally, David Seymour asks, why can’t the government guarantee that New Zealand will have a four week election campaign that’s entirely worry free of the virus?

Not surprisingly, two of the electoral turkeys in question (New Zealand First, National) were not in favour of holding an early Christmas. Both of them argued for the longest possible delay, until November 21st.The obvious

problem with any election delay is that there is no way of guaranteeing that the virus won’t disrupt any date that gets plucked out of the air. By delaying until October 17 in line with Electoral Commission advice, the Ardern government has given itself a bit of breathing space in case a further Covid-19 outbreak occurs, requiring a further postponement.

All up, a pretty well-finessed solution. Call me cynical, but it has been a little hard to swallow the claims (on all sides) that the case for postponement has been driven by a selfless pursuit of free and fair elections. For National, any delay is a gift, in that it buys extra time until economic hardship may begin to bite into the government’s support. Ironically though, the louder the business sector calls for wage subsidy extensions – or similar forms of relief – the easier it will be for Finance Minister Grant Robertson politically, to deliver such extra assistance, pre-election.

Amusingly, the loudest calls for the government to step in and reduce the pain that employers are feeling, is coming from the same corporates (and libertarian political parties) that, for the past 20 years, have railed against the evils of state intervention, while also touting the virtues of small government. Clearly, there’s nothing like the advent of personal pain to enable a rethink, and a view of state support in a more kindly light. For the wider good, of course.

Like any new converts, these new enthusiasts for corporate socialism tend to be dependent to an extent unimaginable by dole recipients or solo parents. With nary a blush, business has been demanding “Where’s the plan?” of the Ardern government – as if sustainable planning for economic recovery was solely the government’s problem, with no parallel obligation on business to look in the mirror. In fact, the wage subsidy scheme was originally intended to give troubled sectors (eg tourism, international education, and hospitality) time to reconfigure their operations It was not meant to be a pause button until whenever normal service would resume.

Obviously, government decisions about border security and alert levels do have a major impact on business. However, in almost every other part of the developed world any “plan” that involves merely opening up the economy while the virus persists in the community has resulted in (a) an unacceptable loss of life, while (b) failing to alleviate the economic pain being felt. That’s largely because there is almost no point in businesses being open if customers are too afraid to frequent them. As yet the business sector has shown few signs of recognising that reality, let alone of offering any solutions of its own for it. Instead, there seems to be an expectation that the community needs to suck up its anxiety, and shoulder the risks involved in putting their lives at risk, mainly in order to create more opportunities for business.

Footnote: To repeat: there is no reason to think that being the incumbent during a pandemic delivers an inherent and unfair advantage. If an advantage exists, it is because the government has created it. As in any electoral cycle, competence wins public support, and a display of incompetence undermines it. For Donald Trump, Jair Bolsonaro, Boris Johnson, Emmanuel Macron and Victoria’s state premier, Dan Andrews, being the incumbent during a pandemic has been a liability, and not an asset.

On this point Judith Collins has, in essence, been complaining that bwah, it’s just so UNFAIR that PM Jacinda Ardern is more popular, and that – because of this – the election needed to be postponed until such time as Collins (and the party she leads) can be viewed in a more favourable light. Again, it was basically another call by the centre-right for a state subsidy – this time, of the electoral clock. Well, Collins has got an extension of the election date. Perhaps now she too, can look in the mirror and cease looking elsewhere for excuses.