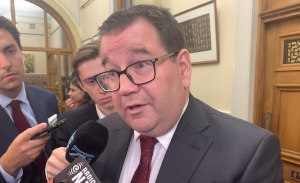 A quick quiz for the weekend. Which political party currently represented in Parliament issued a press release yesterday that contained these stirring passages:

“According to Freedom House, China is becoming less free, and 2019 was the 14th consecutive year of decline in global freedom.”

“If we don’t stand up for our values – and by ‘we’, I want to be clear, I am including the 250,000 Chinese New Zealanders underrepresented in our politics – then who will?”

Hmmm, now lets see. Anti-Chinese sentiments. Assimilationist rhetoric. Suspicions about the claimed benefits of free trade. Nostalgic calls to defend “our” values defined as those shared by our predominantly white, traditional allies. This has got to be a press release from New Zealand First, right? Wrong. It actually came from the Act Party. Sure, Act and NZ First do have their differences and on occasions David Seymour and Winston Peters have been known to fuss and fight in public. But as the old song says, you always hurt the one you love, the one you shouldn’t hurt at all.

Consider again, those striking similarities. A champion of New Zealand values. A penchant for fronting populist causes. Suspicions about the intentions of China-as- superpower, and of the alleged benefits of unfettered free trade. A hankering to tailor immigration to reflect traditional ties. Both are highly attached to economic policies from decades ago. Both believe they lead and embody the only moral, principled party on the centre-right of the political stage. Both display flashes of real humour, while having a thin-skinned aversion to criticism. Apparently both seem more than willing to dog whistle to this country’s more reactionary sentiments. Truly, Seymour could be Peters’ prodigal son. He certainly seems to have learned a lot from observing the old master.

Ultimately, it is a form of consolation. If Election 2020 happens to be when we all finally get to say “ Vaya con dios” to Winston Peters, it is a comfort to know that when it comes to (a) the populist political style and (b) the causes that Peters has represented… The torch is being passed to a new generation, to the man from Epsom. All hail the new Winston!

Spring arrives on September 1st and that’s when the wage subsidy scheme is due to expire. Thousands of New Zealanders could begin losing their jobs, barely three weeks out from Election Day. Inevitably, the resulting loss of income appears likely to heighten the existing tensions between tenants and landlords. This tension is already apparent in the OTT reaction on the cehtre right to the mild package of reforms ( see below) contained in the Residential Tenancies Amendment Act, which got passed into law this week. Hysterically, National is calling this legislation the “I Hate Landlords” Act. Only a party that hates tenants could arrive at such a conclusion.

Political pragmatism would suggest that Labour might choose to extend the wage subsidy scheme. Otherwise, large numbers of Labour’s core supporters will be joining the dole queues shortly before they cast their votes. At present, Labour is promising no major new policy announcements during the election campaign period. An extension to existing measures might not count. Obviously, any decision to prolong the wage subsidy scheme would risk being painted as an act of electoral desperation.

Fortunately, New Zealand can readily afford to borrow the funds required to extend the scheme. Despite its Covid-19 borrowings to date, government debt is still running at below the EU average, at only 54% of GDP. That is considerably below say, the 75.2% ratio in Germany, which is widely seen to be a very successfully managed economy. Last week, there were loud calls from the business sector to allow the entry of greater numbers of skilled migrants, on the understanding that such an easing of the rules would deliver major gains in job retention and job creation. Some 50,000 jobs are estimated to be at imminent risk in south and west Auckland alone.

However, the bulk of those 50,000 potential job losses stand to be occurring amongst a casualised, mainly female work force largely employed in retailing. So there’s an obvious mismatch here. A considerable amount of time would elapse before any influx of skilled technicians, engineers and investors could deliver significant gains downstream, in the shape of new jobs. No doubt, an easing of entry for skilled labour – if that’s able to be done safely – would help some firms to cope with the deflationary impact of the Covid recession. But it isn’t much of a solution on the jobs front, given the looming scale of the problem, If experience from the 1930s Depression era is anything to go by, the majority of the newly unemployed will require some form of large scale government work schemes .

In the meantime, the credit rating agencies are reminding us that public health and the health of the economy are not in competition. “The ability of businesses to recover will depend on the pace of a rebound in consumer demand,” Clara Lau, senior vice-president at Moody’s rating agency, advised this week. “[This] in turn hinges on governments’ ability to restore confidence by reducing fear of contagion…outbreaks if they occur, will cause renewed economic disruptions.” It is a message that the business sector keeps on needing to be given.

On that score, a recent speech by former PM Sir John Key only underlined the gap that exists between the job solutions required for workers, and the forms of border easing that are being sought by employers. In particular, Key decried the 2018 ban on foreigners buying houses here. Scrapping the ban, Key claimed, would stimulate the construction industry and create jobs, boost the construction sector and enable foreign investors to lift everyone’s boat. Sure. So many worthwhile jobs are there to be won from building McMansions for the tycoon sector, changing their linen and minding their kids.

Key’s argument seemed to be particularly odd, given that the ban here (and in Australia) exists because foreign investors had tended to buy existing houses, while bidding up their prices. If foreign investors really are looking to build a shelter here from Covid-19, the ban actually points them in that very direction. Besides, with so many Kiwi returnees looking for housing, perhaps we shouldn’t be seeking ways to throw wealthy foreigners into the housing mix.

In all likelihood, Grant Robertson will be driven more by the plight of New Zealanders (a) at risk of losing their jobs, and (b) of losing their affection for the Ardern government. After all, as Paul Simon lamented years ago: “September, I remember /A love once new, has now grown old..” September can be such a fickle month.

Fooinote: Obviously, the Residential Tenancies Amendment Act cannot, and does not, address the affordability of current market rents. What it does do is provide some added protections long overdue, to tenants. As RNZ says:

[The legislation] does away with 90 day no-cause terminations, removes rental bidding, and only allows landlords to increase rents every 12 months.

Clearly this should create a major motivation for younger people to get out and vote. Presumably, young renters would want to ensure that these new protections from rental bidding, random rent hikes and arbitrary evictions are not scrapped by an incoming National government.

Beirut: Blame For Everyone

When any major disaster occurs, the conspiracy theorists are not far behind. In the case of the Beirut explosion, the dust had barely settled before US President Donald J. Trump was claiming (twice !) that the explosion might have been caused by an attack. With a similar disdain for evidence, contributors to Bloomberg News saw the dark hand of Iran at work, via its ally, Hezbollah:

It was apparently not, as President Donald Trump too quickly suggested, a deliberate attack. But still, you have to ask why 2,750 tons of ammonium nitrate — more than 1,100 times what was used in the 1995 Oklahoma City bombing — was just sitting around waiting for someone to set it off.

Yep, you do have to ask but why bother, when America’s usual enemies can be blamed?

It is abysmal risk management, which happened to be a speciality of Hezbollah. The Iran-backed group dominates Lebanese politics at a time when the government has bungled both the pandemic and the economy. The Lebanese people will most likely blame the group for this debacle too, and not altogether unfairly.

Actually, the public are blaming the entire political class in Lebanon. The original decision to offload, store and forget about the deadly cargo was taken six years ago before Hezbollah’s rise in party political involvement. According to the conspiracy theorists, Hezbollah had heinously stored the cargo for future use in weaponry. If so, one has to ask why it then sat untouched on the wharf for six years.

True, Hezbollah has recently alienated many of its former supporters by fiercely opposing the street protests this year against the state of the economy. Yet blame is being levelled at the port authority officials, at the judicial system, and at the inertia inherent in the cumbersome, paralysingly balanced ruling structure that Lebanon inherited from France. Sadly, while French President Emmanuel Macron has called for a “new political contract” in Lebanon, today’s Daily Star newspaper in Beirut is reporting that Macron “did not mean the toppling of the country’s decades-old sectarian-based ruling system, political analysts said.”Stasis is set to continue.

Footnote: For the record, the 2,750 metric tons of potassium nitrate had been offloaded on the Beirut wharf in 2013 from a decrepit Moldovan flagged, Russian-leased vessel. The cargo had originally been bound from Georgia, to a destination in Mozambique. On arrival in Beirut, the barely seaworthy ship and its cargo got impounded, until such time as the requisite docking and storage fees got paid. Despite several warnings of the risk, any action to buy, auction or safely adulterate the cargo was seen to potentially undermine the case for collecting the outstanding fees, even if this was never likely to happen. So the cargo was stored, and largely forgotten. The longer it sat there, the less of a priority it seemed, especially once the economy of Lebanon began to tank.

Finally, everyone’s luck ran out. The full story of the route taken by this deadly cargo to Beirut and the paralysis that left it sitting in a port warehouse can be found here.

A Banger, from Little Simz

No pun intended with this impressive recent track by the ferocious British/Nigerian rapper called Little Simz.

Talking about impressive…while Drake has been known to snooze his way through some of his recent singles and albums, he’s right back in top form in his headlong, deliberately ahead of the beat contribution to this recent single. Among other things, it reflects the Canadian superstar’s abiding interest in the multi-ethnic UK grime and drill rap scenes.