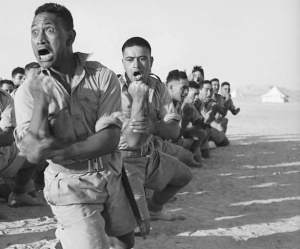 Once the government’s wage subsidies run out and the Covid job losses really kick in, there could – conceivably – be a role for the armed forces in soaking up some of the unemployed, especially among Māori. Here, and in other countries, the armed forces and Police have long been a magnet for jobseekers during economic hard times. “The NZ Army is the NZ’s largest single employer of Māori,” Victoria University academic Dr Maria Bargh wrote (p5) in her 2016 book A Hidden Economy, “with approximately 22% of all personnel being Māori.” Other figures currently put that figure closer to 16% but, either way, it is significant. As Bargh’s book also pointed out, some of the Māori soldiers trained in the NZ armed forces can, and do, go on to fill lucrative roles in the private militia and security firms involved in some of the world’s trouble spots.

In a sense, the lure of the armed forces as a trades training /employment route for Māori and other relatively low income groups in New Zealand is akin to the stereotype familiar from American small towns – where the Army recruitment office functions as a major escape route out of Appalachia, and other economically depressed regions. Already in Australia, there have been signs that Army recruiting is picking up as the Covid recession starts to bite. Also, and as the previous job opportunities begin to dry up in (a) the mainly female industries (eg tourism) and in (b) the part-time and casualised work filled by women workers, many Australian women are also turning to the armed forces:

Recruitment applications to the Australian Defence Force are up by 42 per cent compared to last year. Women and people from the aviation and tourism industries comprise a larger proportion of applicants than usual. The rate of female applicants has skyrocketed by 78 per cent when compared with the same period in 2019.

That last point is significant. Around the world, while there is little sign of a gender difference in those catching the virus, relatively more men are falling seriously ill and dying from it. Conversely, there is early evidence that the Covid-19 recession has disproportionately affected women workers. Moreover, and while relatively more women are losing their paid jobs, the average time that women are having to devote to unpaid housework has increased significantly during the pandemic. In the so-called “chore wars” the virus is not on the side of women.

As mentioned, some of the worst effects on jobs of the Covid recession have been postponed in New Zealand by the wage subsidy scheme, and by the grants made available to small business. During this breathing space, there have been rumours the NZDF has been actively evaluating the role the armed forces might play during the Covid recession, as a kind of militarised combination of boot camp and polytechnic. However, when Werewolf sought to interview Defence Minister Ron Mark on how this work might be progressing, Mark’s office confirmed his interest in the subject area, but Mark declined to be interviewed about it. Once finalised, a proposal would then presumably go from Mark‘s office to the group of Ministers (including Andrew Little and Willie Jackson) with a stake in employment issues.

Finally, any such work in progress faces two barriers: the size of the armed forces in relation to the scale of the problem, and the extent of already committed funding. For better or worse, the armed forces in New Zealand are relatively small in size , amounting to circa 15,000 in all, counting both active and reserve personnel. Unless that capacity is significantly expanded – and unless say, the Māori unemployment response is pointed in this direction –

the ability of NZDF to absorb the people made jobless by the pandemic is limited. Obviously, those settings could be changed overnight. However, one constraint on using the NZDF to absorb the unemployed is that over the past two years, the Defence Ministry has had to cope with years of neglect by the last National government. Billions of dollars have been poured into buying new Poseidon surveillance aircraft and meeting the costs (eg retro-fitting the Ōhakea airbase) associated with them. Among a range of other purchases, NZDF has also bought a new generation of very expensive heavy-lift Hercules aircraft. Anytime soon, there will be calls for further major spending on enhancing the NZDF cyber defence command and control capacities, and for cyber-attack weaponry compatible with that of our traditional allies.

All up then, the public could well begrudge pouring even more money into the armed forces even if – arguably – using the NZDF to employ and Māori and other relatively vulnerable youth would be a far wiser use of public money than the recent spend of circa $3 billion on enhancing our ability to detect Chinese submarines and locate the occasional lost yachtie out in the Pacific.

Footnote: The NZDF does already have on offer its “Force Fit” app, that provides a six week training programme to enhance the physical fitness of potential recruits. The app aims to assist the nation’s youth to be better able to handle the physical demands of military life, regardless of whether or not they eventually sign up.

Footnote Two: In a recent Werewolf column about the Andrew Fallon political scandal, I referred to the comparatively limited scope under New Zealand law of the legal defence of “diminished responsibility” due to stress. By way of example, the column made passing mention of the Lorraine Smith case, where a grandmother carer who killed her teenage granddaughter received a 12 year prison sentence, of which six years had to be served prior to consideration for parole. I’ve since received emails from people on both sides of the Smith case – from those pointing to her culpability and the degree of premeditation that went into her actions, and also from those seeking to exonerate Smith as someone under an accumulating amount of stress that eventually became intolerable.

To be clear: my intention was not to try to re-litigate the trial and sentence. The aim was merely to signal that in the Smith case, while the sentencing judge showed some leniency and some recognition of the stress generated by the years of care, the courts treated this only as a partially mitigating factor and as reason not to impose a mandatory life sentence. It did not treat the long and stressful care situation as grounds for complete exoneration, or for anything close to it.

Regardless, the Crown has reportedly lodged an appeal against what it sees as the degree of leniency displayed by the sentencing judge. Obviously, the eventual outcome will have relevance as precedent for the many NZ families who with minimal support from the state, provide care for long periods of time to relatives with extensive physical disabilities and/or mental impairment. Unless and until the state provides more support to such families, the stress of caring will continue to take its toll, and – evidently – the Crown will continue to take punitive action against the few who snap under the strain.

The lockdown albums keep on coming. For some, no touring creates time on hand, and the ideal conditions for creation. So far, Fiona Apple’s Fetch The Bolt Cutters is still the high water mark for turning the lockdown experience into musical gold, while also conveying the virus-generated anxiety and sense of shrunken horizons that have come with it. Taylor Swift has now entered the arena with an album called Folklore that she knocked off in a few months since April, largely in collaboration with Aaron Dessner and other key members of the National (five tracks are produced by the ubiquitous Jack Antonoff).

Despite the title, the Folklore album is not a return to Swift’s roots in country music. Much of it sounds exactly like the merger you’d expect after she invited the National’s Aaron Dessner on board as a co-writer, multi-instrumentalist and producer. The resulting piano-heavy album showcases Swift’s gifts for melody and for personal observation – one track uses as a take-off point her feelings of empathy with the scandal-prone woman who long ago, used to own the house she’s just bought. Here’s the striking video she concocted – while still observing social distancing – for the album’s first single “Cardigan” which conveys the way her piano functions for her as a portal to worlds of wonder, and as (literally) a life raft in her times of trouble.