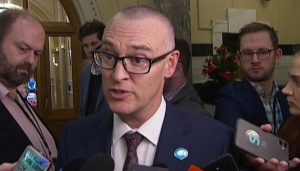 Goodbye, David Clark. In the end, the outgoing Health Minister decided that in the midst of a pandemic the best thing he could do for New Zealand would be to no longer be there – given that being there had involved hiving off on his mountain bike during a lockdown, and throwing the country’s most beloved Health bureaucrat under a bus. As Clark indicated so memorably at last week’s press conference, when it comes to managing public health risks at the border the buck stops with…that guy over there! In the aftermath of that debacle, Clark reached the same conclusion the nation had reached some time ago, that leadership just wasn’t his thing. Once again, he got on his bike.

You have to feel sorry for Todd Muller though. For months – and in Covid-time that means means back when the Gollum from Tauranga still held the One Ring – National has been pounding the table and calling for Clark’s demotion. Yet on the very day when it finally happens does Muller get to wholeheartedly celebrate winning this scalp? No, not so much. Because as luck would have it, the very day that Clark resigns also happened to be the day that Muller had to welcome his deeply unloved predecessor Simon Bridges back into the fold – and not in some humiliating equivalent of caucus dogcatcher either, but in the plum foreign affairs role that Bridges had demanded as his consolation prize at the time of his demotion. “Clark Out : Bridges Back” wasn’t exactly the headline combo that Muller would have been looking for. Presumably, Bridges will be renewing all those great contacts he and the elusive Jiang Yang made during Bridges’ triumphant tour of China last year.

By contrast for Labour, the timing of Clark’s exit has worked out as well as could be hoped. He’s been defenestrated just before the election campaign begins in earnest and just long enough after the bungles in question for it to look like he jumped by his own choosing, rather than being pushed out the window in panic. Chris Hipkins will front the policy issues through until the election while Megan Woods carries out damage control on the operational side, and while associate health minister Julie Anne Genter helps with the day to day detail. It looks manageable until – assuming that a Labour/Greens government is elected – PM Jacinda Ardern can have a proper reshuffle. For what it is worth, my five cents on who she should pick long term for the Health Minister role would be…James Shaw. Major portfolio, socially committed, able business background, and in a ministerial role consistent with the Greens founding principles. She could do a lot worse. Correction : she did do a lot worse, but now he’s gone.

Sure. it could be argued that Clark has paid a high price for his poor judgement, but that’s almost beside the point. He had become a significant political liability. In the context of the election campaign, Clark would have been the poster child for National’s attempt at depicting Labour as lacking in managerial competence. If Labour does win Election 2020, Clark could eventually make it back to ministerial rank in some other capacity. After all… Nick Smith, Anne Tolley, Gerry Brownlee, Judith Collins (and now Simon Bridges) all survived scandals and question marks over their competence, none of which stopped them from falling upwards again into significant positions of responsibility. Former Health Minister Tony Ryall reduced health funding (as a ratio of GDP) and reduced morale on the front lines, while virtually ignoring massive unmet needs and crumbling hospital infrastructure… and yet Ryall departed the Health portfolio showered with praise for

keeping health issues out of the headlines. Think how well that has worked out.

Eventually though, Clark seems to have accepted (or had thrust upon him) that this is his Captain Oates moment. Meaning: Clark could have a future in Labour only by publicly accepting that he had no remaining future as Health Minister. He has now stepped outside the tent, and he may be gone for some time.

Reportedly the US stock market is being kept aloft during this deep Covid recession because so much of US economic activity is now being underwritten by government bailouts, loans and guarantees. (e.g. Boeing.) Risk has been all but eliminated. Much the same can be said for the Christchurch and Wellington convention centre projects, which are forging ahead as if Covid-19 hasn’t happened, and as if conventioneers will still be merrily winging their way around the planet to large gatherings in packed halls, without so much as a care in the world. Taxpayers and ratepayers will be picking up the tab, and will be socialising all the tens of millions in annual losses likely to be racked up for decades to come by these monuments to the bygone pre-Covid past.

Occasionally, reality does break though. Last week brought news that the APEC 2021 event mooted for Auckland will now become a virtual event, with the loss of much of the expected flow-on financial benefits. Some 20,000 people plus spouses had been expected, with related spending in restaurants, on travel, on accommodation etc.

[Auckland Business Chamber CEO Michael] Barnett said a virtual conference simply would not provide the same benefits. “Having people here spending real dollars, having people contribute to our accommodation, hospitality sector, that was going to make a difference, it should have been a part of the recovery.”

Leave aside the old concerns that if every major city in New Zealand builds itself a convention centre, the ensuing competitive rivalry between them will simply cannibalise – rather than grow – the available market, with no overall increase in national wellbeing. Right now, NZ’s budding convention centres are being justified by the jobs that will be created during the construction stage. Given the decades-long servicing and operational costs involved though, these temporary jobs seem like diamond plated ways of creating employment

So far though, the actual fee for breaking the contract and shuttering the Wellington project have not been disclosed. Despite some talk of re-purposing the prime site and convention centre design to fulfil other, more socially valuable uses, it seems too late for this to be feasible. Reportedly, the design being built includes a very large exhibition area that seems to have pulled off the Russian doll trick of creating a white elephant inside of a white elephant – in that just as Te Papa nearby has been dialling back its involvement in travelling international exhibitions ( too costly) this vast exhibition area seems to now have no viable purpose, given that it was birthed with (the now apparently abandoned) film museum in mind. As Wellington Scoop reported at the time, the Council awarded the convention centre contract to developers Willis Bond without putting the project out to public tender.

The shape of future conventions

Optimists may feel that because convention centres last for decades, the return of normality ( revived global air travel, a Covid vaccine) will come in time to recoup at least some of the losses. Again, that’s a major gamble against the odds. We may never have a Covid-19 vaccine in that forty years on, we still have no HIV vaccine. The optimists are also assuming the current fears about long distance travel and large social gatherings will evaporate in time. Along the way, the optimists are also making heroic assumptions that the Covid-19 economic recession will not have resulted in the current rise of virtual conferencing being seen as a permanent option for cost-conscious corporates, thereby further eroding the income – generating potential of these complexes. SurelyWellington has enough dead and unused public buildings in its city centre already, without erecting more of them.

Finally, what are the overseas conference-wrangling experts banking on happening to their business in the near to medium term? The micro-economics of physical conferencing in future will include tighter force majeure ( Act of God) clauses in the conference insurance contracts, much more extensive (and expensive) virtual reality areas and facilities, much more space allocated to social distancing, individually wrapped food and utensils ( no more buffets) and the need to have medical staff on site. These developments are all expected to add significant costs to convention centre profit equations.

At a higher level, if the recession – supposedly the worst since the 1930s – leaves enduring effects for the best part of a decade, there is no rational reason to expect the business of conferencing to revive ahead of that curve. Judging by this report, there is widespread ( and unrealistic) optimism about the likely duration of the recovery period :

Tim Peter is an expert in the hospitality industry, and he pointed to research showing that large company gatherings are expected to be the most vulnerable travel category coming out of the pandemic. “Many companies are already cancelling large events through 2021,” he said. “This may never recover. Virtual events may become a new normal for companies…”

Large US/UK company gatherings seem unlikely to come back in 2021, and will still be vulnerable beyond that timeframe. Even then, a question-mark will still be hovering over whether conferences will be insurable (at affordable premiums) in the post-Covid environment. In sum :

• People won’t return to in-person events until they can be assured of safety.
• “Mask-free” safety for large events probably can’t be assured until late 2021 or beyond.
• Many safety-related and economic travel restrictions will remain in place through next year.
• Some conferences may be in jeopardy until the insurance situation sorts out.
• Youth-oriented events and conferences in countries that have rebounded from the virus will return more quickly. [ Theoretically this would give NZ a marketing edge, but only if we agree to scrap the quarantine requirements currently keeping the community safe. Again, this theoretical opportunity looks like being vaccine -dependent. ]
• Virtual events will thrive and rapidly evolve but probably won’t offer “normal” opportunities….until a technological breakthrough makes them more attractive for paying registrants.

In coming weeks, Werewolf aims to look more closely at the cost/benefit situation of our convention centres, in the light of Covid-19 realities. At this point though, reading the business case for the Wellington Convention and Exhibition Centre is like entering a time capsule back to a world that no longer exists.

The murder last Monday in Addis Ababa of the gifted 34 year old Ethiopian musician Hachalu Hundessa is a loss for his family and for world music. Also, his Oromo people kived him, as the embodiment of the struggle they have waged against persecution by successive Ethiopian regimes. (Hundessa’s social activism had first landed him in jail as a 17 year old.) In turn, he never let up on linking his creativity to Oromo needs and traditions:

His ballad “Maalan Jira” (“What existence is mine”) concerned the displacement of Oromo people from Addis Ababa. Months after the single was released in June 2015, protests opposing the Addis Ababa Master Plan occurred throughout the Oromia Region. The song became an anthem for protesters and became one of the most viewed Oromo music videos.

In recent days, the BBC has reported that 81 people have died in the protests against his killing. On Tuesday, the current government shut down the Internet in parts of the country in an attempt to control the outpouring of grief and outrage at the killing. This beautiful video for “Maalan Jira” transcends the language barrier: