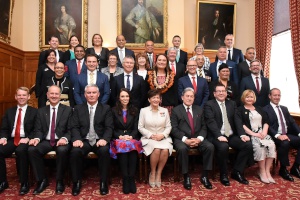 Back at the dawn of time, MMP was created (a) to impose a discipline on government and (b) to prevent any one party from riding roughshod over everyone else, the public included. In essence, this is exactly what has happened in the dispute over quarantine fees where – despite holding sharply differing views on the issue – Labour, the Greens and New Zealand First have all agreed to support the Greens position, despite giving each other a lot of mean glances and dirty looks. Ultimately, the fees will be levied only on those Kiwis who come and go from the country after the proposal has passed into law. Even then, compassionate exemptions and fees repayment deals will be possible. Basically, any New Zealanders living abroad who want to return home to flee the pandemic will still be able to do, on the public tab..

Obviously, these settings will generate far less revenue than the sweeping measures originally proposed by Labour and apparently supported -in principle at least – by National. The fact that the coalition has eventually reached a consensus position will no doubt disappoint the hard-line politicians and their media counterparts who still hanker for the dictatorial certainties of decades gone by. A time when governments with a bare majority in the House could force their pet ideological projects down the public’s throat. You know, the good old days.

This current outcome looks far more mature. Party leaders who disagreed on the details have expressed their views strongly, yet they’ve also taken public opinion on board and agreed to back a more modest version of the original plan. If that MMP bargaining process had been available in the 1980s and early 1990s, New Zealand could have avoided doing itself a lot of irreparable harm.

In passing it is interesting to plot (along an ideological spectruim) the party positions on quarantine fees. Doing so contradicts the hoary old stereotype of the centre -left being a bunch of “tax and spend” liberals. In this case, the keenest advocates of the sweeping tax and spend positions happen to be the conservatives on the centre-right (National, New Zealand First) and at the moderate centre (Labour) – while the most left-wing party (the Greens) have successfully proposed the least burdensome tax option that will deliver the least amount of revenue to the state. So much for the stereotype.

Australians are if anything, more prone to be a bunch of flag waving, noisy nationalists than we are. Which makes it kind of fascinating that across the Tasman, all states have moved to impose a sizeable quarantine fee on all returnees, and with relatively little fuss from the residents of the Lucky Country. Here’s the situation in Queensland:

The quarantine fee includes your accommodation and daily meals. It costs $A2,800 for 1 adult, $A3,710 for 2 adults, and $A4,620 for 2 adults and 2 children. At the end of your quarantine, you will get an invoice to pay within 30 days. Payment plans are available if you cannot pay by the due date. Details will be on the invoice.

And here are the fees for Australians coming home to South Australia :

*additional children: $A500 each

In NSW, the same fee structure applies as in South Australia, with the NSW family package concession deal being : a family of 2 adults and 2 children over the age of 3 in one room would pay $5000. (Quarantine is free for children under three. Whoopee.) In sum….not only have Australian states imposed painfully high fees on those of their citizens trying to get home during the pandemic. In addition, the conservative Morrison federal government has also gone so far as to impose restrictions on the numbers of Australians allowed to return home :

Airlines will be told to cut the number of flights and available seats to Australia…to significantly reduce the number of international arrivals in a bid to relieve pressure on hotel quarantine…Prime Minister Scott Morrison added [that] all states and territories will be moving toward charging for quarantine. He acknowledged it will be harder for Australians to return home, but the decision to cut weekly arrivals from as many as 6500 to about 4000 was a judgment made “in the national interest”.

Oj, there was a brief public outcry about these draconian measures but only a minimal one. There has been nothing in Australia to match the furore that erupted here, over our far less burdensome proposals. Good on us, I guess.

The one solid rule with the toxic and corrupt presidency of Donald J. Trump is that there is no bottom to his pit of weirdness. When you think he can’t possibly do worse, he does. Last week, Trump’s attempt to prove his superbrain prowess led to those disturbing clips of him demonstrating his ‘amazing’ ability to remember and repeat the cognitive test sequence : “Person, woman, man, camera, TV.” (Its worth checking out the Trump clips, which arrive a few minutes into this Stephen Colbert monologue.)

Trump continues to peddle the claim that the US is recording so many infections only because it is doing so much testing for the virus. Right. Sure. Because hey… if we didn’t have pregnancy tests, no-one would be getting pregnant, right? Yet as mentioned, this week’s examples of Trump Bizarro continue to surpass what has gone before. This week, Trump – and his son Donald Jnr – have tweeted their support for a video featuring one Dr. Stella Immanuel, in which she promotes such ideas as : masks do not reduce transmission, a cure for Covid-19 is on the way and in the meantime, our old friend hydroxychloroquine will cure infected people with diabetes and high blood pressure, just fine.

Not for the first time, Trump recommended Dr Immanuel as being a ‘spectacular’ doctor and who wouldn’t? Dr Immanuel also says that gynaecological problems (such as cysts and endometriosis) are caused by people having sex with aliens and ingesting their demon sperm, and that doctors use vaccines to inoculate people against becoming religious. On the back of the Trump family recommendations, Dr Immanuel’s video reportedly racked up eight million views before social media platforms took it down.

Oh, and this week the Trump administration is also flouting the recent Supreme Court ruling that the children born in the U S to illegal immigrant parents should not be deported. As always the Trump weirdness is of concern, but is less damaging than his actual abuses of power.

Talking about radical conservatism….it can have a positive side. For instance, here’s a track by one of the most interesting new traditionalists in country music, the Canadian singer/writer Colter Wall. In this live performance, Wall does a great cover of “Cowpoke,” a song written six decades ago by Stan Jones, who also wrote the Western classic“ Ghost Riders in The Sky..”

Wall is also a pretty good songwriter himself. Here’s his “ Sleeping On The Blacktop” a mini-hit for him on the US country charts early last year…