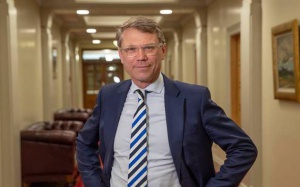 Good grief. Well, we shouldn’t be all that surprised at National MP Paul Goldsmith and his “ stick to your knitting” comment yesterday. Sexism and the National Party go together like love and marriage and the horse and carriage era to which Goldsmith’s comment belongs. What was at issue yesterday was whether PM Jacinda Ardern was competent to make a judgement on an issue to do with the economy – namely, whether The Warehouse should have pocketed all those millions of taxpayer dollars in wage subsidies for workers in Warehouse outlets that it had apparently intended to close the moment the country got back to Level One.

By dint of Ardern being a woman, Goldsmith was suggesting, she was not competent to make a judgement on an economic issue, let alone to express anger about it. (Subtext : women holding public office are forbidden to express anger. It is so very unseemly. Anger is something best left to men, because they’re so good at keeping their emotions in check.) National has a long history of this sort of thing, and recent form on it as well. Early last year, National ran that memorable political attack ad in which a young blonde woman had to have the failings of Kiwibuild mansplained to her by an articulate, no bullshit young Nat. It was a fantasy of how National sees the electorate : as dumb, idealistic and needful of being putting right by the inherently competent white men of the centre-right.

Like I said, a fantasy. At this election, National’s entire campaign is going to be based on the same confidence trick i.e, that it is the only party that really knows how to run an economy – despite all available evidence to the contrary. For starters : when last in office, National presided over huge social deficits in housing, neglected the country’s crumbling infrastructure, and deliberately underfunded the health system, thereby leaving it poorly placed to cope with the threat of the pandemic.

National’s disdain for the social problems that it allowed to fester on its watch is a prime reason why a significant gender gap among the electorate – with more women voting for the centre left. Goldsmith’s comment will make it even harder for National to attract women voters, especially young women. Really, National’s whole political schtick belongs to a bygone era – when father knew best, when doctor knew best, and when the National Party could be relied on to run the economy for the benefit of employers, who would share their profits fairly with their staff, and invest wisely in their firm’s future development. Fantasy stuff. Back to the days of 1950s prosperity when women didn’t need to be told to stick to their knitting. In essence, National is promising to Make New Zealand Great Again. No wonder their new leader has that hat.

Footnote ; And who you may well ask, is Paul Goldsmith ? Well, he’s the list MP that his own party decided should step aside in Epsom, and allow David Seymour take the seat and jointly exploit the MMP system, to the parliamentary benefit of the centre right. No wonder Goldsmith isn’t all that angry at the apparent rorting of the Covid-19 wage subsidy scheme by The Warehouse. Ironic, too, that Goldsmith and Seymour – who the centre-right’s most vocal advocates of libertarian, pure market economics – should have agreed to suspend the operation of market forces entirely in Epsom, because it suits them to do so.

But Goldsmith has always been flexible. Flexible enough to wax nostalgic in a biography he wrote about the Don Brashera. Brash was, in Goldsmith’s view “the first leader of a major political party in New Zealand in living memory to question the morality of progressive taxation and the behaviour it encouraged from political parties in a democracy where the link between voting rights and paying tax had long been severed.” (Yes, return to the good old 19th century days when the poor (and women) were not allowed to vote.) The origins of the Brash biography became a story in itself :

At the launch of the Don Brash biography, Brash: A Biography, Goldsmith assured Danya Levy of the New Zealand Press Association that the book “was not commissioned by the National Party” and that it was his own initiative, but written with Brash’s co-operation.[4]

But as investigative journalist Nicky Hager in his book The Hollow Men revealed, it was indeed commissioned by the National Party, and was in fact the party’s first big budget item in the 2005 election campaign. Hager quoted a 21 May 2004 email from Brash to Richard Long, who was his chief of staff, where a proposal from Christchurch publisher Willson Scott for the biography was discussed. Long replied two days later that he had discussed the book with Goldsmith, and Brash in reply wanted political historian Michael Bassett [a personal friend of Brash] to be considered,

The book was eventually commissioned with Goldsmith, and was paid for by National Party donors through a company called Silverbeat, which belonged to Brash’s assistant Bryan Sinclair….

Later, Goldsmith wrote mournfully about National’s ’s subsequent drift back to “a more centrist political line.” Flexibly though, Goldsmith then embraced John Key, the arch priest of the centrism that Goldsmith had affected to despise. Amusingly, this puff piece profile of Goldsmith unwittingly manages to convey his….flexibility on such matters.

Like many of his fellow National MPs, he speaks wistfully of the Key years: “He had the ability to flit from meeting to meeting, and function to function, and still be able to put on a smile and banter with the public on an early morning flight the next day.”. Allowing himself to be pulled into the centre during the Key years is hardly a-typical for Goldsmith. He finds a way of marrying his politics with whatever job he may be doing at the time.

One can sympathise. It must be galling for such a prime piece of political ectoplasm to have to watch from the sidelines as Ardern succeeds(both here and on the world stage) by having a coherent set of values, and the ability to enact them consistently, and competently. Women can be so very vexing in that respect.