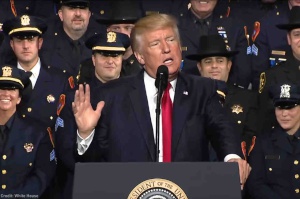 So….Is the world likely to have to endure a second term of Donald Trump’s proto-fascist presidency? Probably not, at this point. The opinion polls – both nationally and in some of the states most likely to deliver the Electoral College outcome – are looking promising at this point for Joe Biden. Early days, of course. Over the next four and a half months, we still have to worry about Trump (a) calling off the election (b) refusing to leave office if defeated, (c) unleashing his armed neo-Nazi militia pals and (d) screwing the result by vote suppression strategies and illegal voter purges of registered voters. Georgia’s recent primary election offered a really disturbing portent of what is to come. If Trump looks like losing fair and square, he will try to steal the election by any means necessary

For now, we have to assume Biden will not choose a disastrous running mate ( see below) and that neither Trump nor Biden will fall victim to Covid-19. Nationally, master statistician Nate Silver’s 538 website has the rolling average of ratings for Trump’s performance in office running at 55.1% disapproval, and 40.8% approval, which is Trump’s lowest approval rating this year, and headed south.

Is there any good news for Trump? Yes. This mid-May poll by Politico showed that most voters trust Trump to be a better manager of the economy than Biden, a belief in inherent economic centre right expertise commonly echoed in New Zealand as well – despite the decades of empirical evidence to the contrary. The favourable May figures may have been distorted by the public’s anxious desire to re-open the US economy and to limit Covid-19’s impact on jobs and business viability. In all other respects Trump has been a disaster for the US economy, given that he squandered the growth platform he inherited, and topped that out with gigantic tax cuts that have mainly benefitted America’s ultra rich.

That 2017 tax cut package remains the most significant legislative achievement of the Trump presidency. The one potential lifeline for Trump would be if – unlike the Great Depression of the 1030 – the Covid-19 recession was short and sharp, and if an equally steep rebound was evident by November. That’s unlikely, but it is theoretically possible.

The term “swing state” is not a precise concept. As others have noted, it can mean simply that a state is likely to be closely contested ( a “toss-up” state) or it can mean that the state reflects the pattern likely to unfold nationwide ( a “bellwether” state). What the terms have in common is that the outcome in those states is believed likely to determine the outcome in the Electoral College that in turn, decides the presidency.

Here’s how the influential Cook Political Report has been reading the basic configuration, in which Biden starts out with a small but significant lead:

So how is Trump faring in those named “toss-ups?” Not so great. As of this morning, Biden is ahead by double digit numbers in Michigan, by more than five in Pennsylvania and Wisconsin, and by nearly four per cent in Arizona. As Matthew Yglesias of Vox News also points out, Biden’s leads in 2020 are larger and more substantial than the ones held in June 2016 by Hillary Clinton – given that the pool of undecideds and declared independents is smaller this year. Even allowing for the US version of the “ shy Tory” effect (where respondents are too ashamed to confess to pollsters their support for an unpopular incumbent) Biden’s lead in several key states is currently so large as to negate this so called “non-response error”.

His lead would also overcome the undue weighting given to Republican ‘red’ states by the Electoral College. Which is all well and good, if the election was being held tomorrow. Obviously, between now and early November, a lot of things will happen. Yet right now, there is absolutely no reason to regard Trump’s re-election as a foregone conclusion. Currently, he’s lagging behind Biden, and nothing is going right for him.

Footnote One: Another negative sign : in 2016, Trump won the seniors vote by seven percentage points over Clinton. This is a crucial bloc. As the LA Times recently pointed out :

Nationwide, voters 50 and older made up more than half the 2016 electorate, according to the Pew Research Center; voters 65 and older made up nearly 30% of those casting presidential ballots, even though they constituted just 15% of the population.

To put that same fact another way : 70 percent of voters age 65 or older turned out in 2016, compared with just 46 percent of voters under the age of 30. Well, Trump was in trouble with seniors even before the Covid-19 crisis hit. Here’s a summary of the current decay of support for Trump among seniors, even in Florida – which he won by only one percentage point in 2016. June’s polls in Florida have been especially bad for Trump, and show anything from a one to 12% deficit against Biden. The Florida results are bouncing around, but the erosion of support for Trump occurring among seniors nationally does appear to be genuine.

Footnote Two. For decades, Ohio has been a staple of swing state speculation. ( In a previous lifetime I travelled around Ohio and Florida as the two main swing states while covering the 2004 election campaign.) More recently Ohio has become reliably Republican – Trump took it in 2016 by 8 points – but there are troubling signs now in Ohio for Trump, even among the white non-college voters who comprise the most solid part of his national electoral base.

Footnote Three : This morning’s revelations in John Bolton’s book that Trump corruptly tried to induce China to buy US agricultural products (in order to improve his re-election chances in the farm states)will come as absolutely no surprise to anyone. From day one of his presidency, Trump has treated the United States as a failing company that he’s been asset-stripping for his own benefit. In the past week, that same tendency has been evident in his response to the police brutality issue. When cops brutalise and kill unarmed black citizens they’re fine guys doing a great job – but when they investigate the finances of himself, his family or friends, they’re slimeballs. To boot, they’re dirty cops and rotten to the core :

If the police shove a 75-year-old peaceful protester to the ground, cracking his head, it must be the protester’s fault. If the police prosecute one of his friends for tax fraud or perjury, it must be that the officers are corrupt. On Tuesday in the Rose Garden, the president signed a modest executive order encouraging police departments to improve training and bar chokeholds in most circumstances. He said he had met with relatives of several black men killed in encounters with officers, declaring that “all Americans mourn by your side.”

As the family of George Floyd found, Trump’s meetings with mourning black families tend to be one way traffic. At that Rose Garden signing, Trump surrounded himself with police officials as he rejected calls for wider police reform :

“The vast majority of police officers are selfless, courageous public servants,” Mr. Trump said. “They’re great men and women.” He does not feel that way, however, about the law enforcement officials who have investigated his own matters or come after his associates. Rather than great people, they are “bad people” and “crooked people” and “human scum” and “dishonest slime bags.” In the past 18 months, the president has tweeted the phrases “dirty cop” or “dirty cops” at least 20 times and used it on camera at least 25 other times, always in reference to investigators looking into him or his campaign or his allies.

Footnote Four. Biden has already said he will pick a woman as vice-President. Eight or nine women are still currently in contention. On inauguration day, Biden would also be the oldest person in the job. As the NYT’s Daily podcast reported yesterday the US is facing overlapping crises in policing, the economy and Covid-19. The police reform crisis has advanced the prospects of Florida Congresswoman (and former police chief) Val Demings and first term Atlanta mayor Keisha Lance Bottoms, a long time Biden favourite. Conversely, California senator ( and former prosecutor) Kamala Harris of California and Minnesota senator (and former prosecutor) Amy Klobuchar are both facing strong media and intra-party criticism for their roles in prosecuting – and failing to prosecute – police behaviour in the past.

On the economy /coronavirus front, as the NYT says, Massachusetts senator Elizabeth Warren and Michigan governor Gretchen Whitmer have the credentials for the job – which as it adds, is complicated by Biden’s advanced age and the almost certainty of him being a one term president, if elected. Meaning : any vice president will not only have to be ready for the top job within the next four years, but also be acceptable as the anointed front-runner for the top job in 2024. Therefore, this inexperience factor seem likely to count against Georgia’s Stacey Abrams ( who has only minor elected experience in Georgia) and also against Bottoms. One of the key aides said to be helping Biden to make his choice is Delaware’s two term black Congresswoman Lisa Blunt Rochester.

Finally, Biden has refused to endorse the calls to “ defund the police” and – instead – is stressing the need for police reform. On that point, he has been echoing the veteran black Georgian politician and House Majority whip James Clyburn, whose endorsement rescued the Biden campaign at a point earlier this year when it looked like failing. Clyburn’s position on police reform is very much Biden’s position : namely, the achievable aim is to deconstruct the police and re-imagine their role, and not to defund and/or abolish them entirely. As Clyburn says, the difference may be in terminology, but the words matter :

In that respect, the Clyburn/Biden position is not all that comprehensively different from activist calls to re-assign many of the usual policing enforcement roles to social service agencies. Currently, as Clyburn says, the problem with the “ defund the police” slogan is that it is working mainly to the benefit of Donald Trump, who is using it as cover, and to scare the daylights out of (white) suburban Americans.